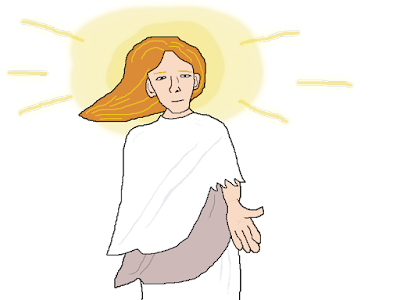 The immaculate is a priestly, divine body. It is a person free from all disease, blemishes, or evil inside. They do not have genitals or an anus. They do need to eat, but do not suffer from wasting away- they simply politely ask for food until starved to death, then keel over dead. Their corpses do not rot, and they cannot be raised from the dead in any way. Depending on the culture from which they come from, the Immaculate has traits associated with beauty and purity. Pure milk-white skin, curly hair, ebony black eyes, whatever the traits are, they have them. Their otherworldly perfection only increases as they increase in level, and they do not age either.

The immaculate are the result of a divine body on Earth. Something chaste, perfect, and magically gifted in the arts of healing and holy magic. If your game uses Clerics, these are like the weaker, more magical version of them.

All of the gold the immaculate earns is donated to charity, or the church. They still gain XP for gold earned/spent, just don't get to keep it. Depending on the theme of your game, the Immaculate is also always Lawful Good, or is never blamed for the wrongdoing of the party; they are incapable of cosmic evil, at the very least.

The Immaculate is immune to disease of all kinds. When the Immaculate is 4th level, they may touch someone to give them a second save against disease. At 8th level, this applies to magical diseases and the wasting of level drain as well. This also carries over to things like infection, scarification, or burns or brands from various forms. They disappear from the flawless skin of the Immaculate in a number of weeks equal to 10 minus their level.

The Immaculate must eat, but relies on alms and charity mostly. They can also make food go farther- by taking a single ration and sharing it with those who cannot have one themselves, it will be duplicated. The Immaculate can feed up to their level x5 people by sharing. Food shared to the wealthy or able-bodied gives them a bloated feeling of guilt afterwards.

They are also skilled at healing. Increase all healing actions done by the amount + their level.

At 10th level, the Immaculate becomes Perfection Incarnate. The Immaculate has little reason to remain on Earth any longer, but if they chose to do so they attract a flock of 200x1d10 downtrodden and filthy to be healed and counseled. At any time, the Immaculate may ascend to heaven as an angel, or agent of good among the cosmic order.