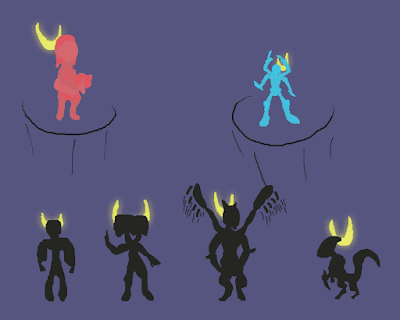 The first God of the Pantheon will always be a figure that is the “Prime” deity. They're usually the first deity, and match the gender of the society or race's main inheritors or higher class. As in, Matriarchal Socities will have a female prime Goddess, and Patriarchal societies will have a male Prime God. This God or Goddess is not only the most important member in the Pantheon, and has a godly domain that is most important for the society as a whole. For the Prime God, roll only a 1d6 on the domains table. (For an “evil” or dark side race, you can roll 1d6+14 instead). The Prime Gods will usually be mature in appearance, so no roll on the appearance table is needed unless you're trying to be different.

The Prime God or Goddess will also be joined by a second one of the opposite gender, and will be the first couple from which all the other Gods and Goddesses are born, who have children amongst themselves- God relationships are usually pretty incestual, and the family tree is very insular. For the partner of the Prime God(ess), roll a standard roll on the d20 domain table, but they will usually favor the domains of motherhood/fatherhood, family, homecraft, etc. Some Domains can support multiple Gods, where as others work best for a single important God.

Prime God(s) Creation – 1d8
[1] Born by a primordial being, usurped them to take power.
[2] Born from the dead body of a primordial being.
[3] Crawled forth from Primordial nothingness.
[4] Prime always existed, created perfect companion; later the pair birthed the world.
[5] The pair always existed, took turns building the world as day and night/spring and winter, etc.
[6] The pair sprung forth from a primordial energy that infuses all creation (ying/yang, etc.)
[7] The last remaining being from a previous universe. May have had very humble beginnings.
[8] Not made at the creation of the world; awakened far later. May be a personified origin story of a city state or great natural disaster like a flood that created this God. Still the head God.

Once your Prime Gods have been determined; roll 1d6+2 to determine their number of offspring. Each offpsring rolls on the domain table and appearance table. This is the second generation of Gods. If two offspring of the Prime Gods are of opposite genders and they aren't kids, then they can have their own offspring, rolling 1d3-1 for their number of children- roll on God Relationship table. Any unpaired children or if all children are of incompatible genders; they can still make children in divine asexual reproduction. As many divine couples can be made as possible. Typically, Gods of each lower generation are weaker or have more specific and minor domains; a War God of the 3rd or even 4th generation of Gods may just be the God of Spears, etc. Offspring of the 3rd generation of Gods only ever have one child or give one of the couple a random quirk instead; or roll on the Demigod generation table at the end as their divine bloodline degenerates. If unwed opposite sex Gods remain among different generations, you can include uncles & aunts to the lower generation as partners and roll on the relationship table for them.

After rolling the first unusual God appearance, you can have all following Gods that roll unusual have that same result. This way, all unusual Gods in the Pantheon have the same “theme”. Or you can keep rolling each time to have a truly wild Pantheon.

Finally; to finish up your Pantheon, roll 1d4 quirks for Gods who aren't interesting or don't have abstract forms, roll 1d6 Demigods and divy them up among unwed Gods (or wed Gods) as divine bastards, and tweak things to be your own as I did in the example generation. Enjoy!

Unusual Appearances Table – 1d6
[1] Monsterous. Roll a few random monsters, then roughly combine in shape of large ogre or beast.
[2] Abstract symbol or Eldritch abomination.
[3] Roll a random Animal. Animal should be based somewhat on their Domain.
[4] Roll two random Animals, combine, then roll 1d4 on God Appearance Table. Has a regular mortal face of that type, irregardless of actual gender of the God.
[5] Roll 1d6 on God Appearance Table to determine body. Head of body is tied to their element, such as a flaming candle for a head for the God of Wisdom or Magic.
[6] God is actually two Gods for this domain, pair of identical but opposite gendered twins. Roll again on Appearance table and have one as swapped gender.

God Relationship Table – 1d8
[1] Unwed, children out of wedlock. Not very scandalous for Gods anyway. Normal kids roll.
[2] Unwed, passionate lovers. +1 Kids.
[3] Hated, bitter rivals. They hatefucked. -1 Kids.
[4] Accidentally had kids, one mistook the other for a different God(ess) they fancied, divine love triangle. -2 Kids roll, if a Kid does appear it's from their one night stand.
[5] They came together to have one perfect kid- combining their best aspects. Give their offspring a quirk and domain and decide if it was a success or humiliating failure.
[6] Married, approved by Prime God. 50% chance for Prime God's partner to be totally against it and still plotting to ruin the relationship even now.
[7] Mentor/Student Relationship, with the older appearance, older in generation, or more powerful taking the younger under their wing. Eventually became a secret romance. Normal kids roll.
[8] Arranged marriage. One of the two was not happy with it, constantly mingles and mates with mortals, making their lover angry. -1 Kids, but 1d4 Demigods.

God Quirk Table – 1d12
[1] God has a common magical pet, like a dog, cat, bird, or rodent. It's intelligent and spies for them.
[2] God had a drunken tryst with a mortal champion of this pantheon's race; roll a Demigod.
[3] God has two forms, roll again on appearance. Shifts between forms every few thousand years.
[4] This God has a minor domain. Roll again on Domain list, they are a secondary deity of that.
[5] Appointed to Judge souls of mortals for the afterlife, favors giving out harsh punishments. If the God of Death is present, then they are the Judge while this God is the executioner.
[6] God is bound to a specific place in the divine realm, such as being chained to their anvil or locked in a dungeon as punishment by the Prime deity. They can only answer to followers in secret.
[7] God has a cutesy softie hobby, like tending a small garden or giant bunny rabbit pet that they groom every night. If anyone messes with it they go ballistic.
[8] God has an Astra- a powerful divine weapon. 1 in 4 chance they didn't make it, but stole it from someone else instead, keeping it because it's so powerful. Hesitant to lend to mortals.
[9] God has a powerful magical item, such as magic cloth to make invisibility cloaks or a magic hat that lets them teleport to under any friendly sky. Very powerful if dropped into mortal realm.
[10] God plays a musical instrument very well. If they're the God of music, then they practice with a weapon instead, keeping this art hidden for self defense.
[11] God is racist towards a specific group of mortals other then their own. Known as a symbol for smiting down members of that mortal race.
[12] This God forged a magical island in the world, which they retreat to sometimes. Mortals can sometimes see them here out the corner of their eye or as a breeze, which could be seen as a sign of good luck or incredible misfortune depending on the God.

Demigod Table – 1d6
[1] Generate a random monster. This Demigod is merely a huge, powerful monster.
[2] Roll on God appearance table, rerolling on a 6. This Demigod just wanders the Earth in secret.
[3] Roll on God appearance table. Demigod is a loyal servant of the heavenly hierarchy despite minor status; enthusiastically guards the divine vaults or beats up demons who wander from hell.
[4] Instead of a single child, a single species of animal was born into this world in the resulting explosive birth; roll a Random Animal. All animals of this type are slightly sacred to these people.
[5] Prime God did not approve of this child's creation, and believed it to be a degeneration of the divine bloodline. This Demigod was forcibly turned into a major magic item instead.
[6] Roll once on God appearance table, rerolling on 6. Then roll on the Unusual God appearance table. This Demigod has these as two separate forms they can turn into; but lose control during an astrological event and turn into their more monstrous form and go on a rampage.
Posted by Cacklecharm at 6:00 AM