I've been reworking the Sage class into something a bit different lately. I still like their focus on Support, and being the most 'magic' class despite not having spells, but I've also wanted to increase their focus on knowledge and taking away their inexplicable magical powers.

So instead; here's a nonmagical version of the Sage. 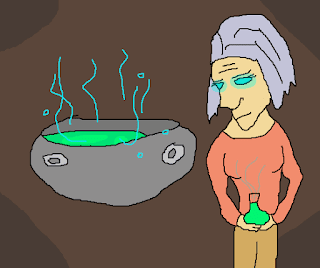 Instead of casting spells, the Sage uses knowledge to aid their party. They can identify magic items and also learn clues about tracked monsters. They are the best at brewing magic potions, gaining +1 per Sage level to the potion's effect roll, and can identify their ingredients easily.

Instead of casting combat spells, Sages can use magic rods like everyone else. But a Sage can also bind themselves to a single magic rod, which increases its charges by +1d6. The Sage can cast some minor cantrip-like magic that requires no charges even if they don't have the rod, as long as it isn't an attack. The magic is inherent within them now, until the rod is destroyed.

Finally; Sages get +1 to their magic roll per Sage level; which are done when using all sorts of magical rituals, items, spells, crafting, crossbreeding, and all other forms of magical actions.

Magic User Titles
All “magic users” or Sages are the same class. The different names are merely titles, depending on what they know and do.

Sorcerer is a catch all term, with a connotation of some respect.

Wizard is an official or employed magic user, usually acting as a court Wizard; a magical adviser and specialist for a ruler or lord. Mages or Magician is used for an employees magic user in a lesser role, such as working for a guild or smaller entity. Battlemage is one that fights in an army.

Witch is a term for an unscrupulous or lowborn magic user. Has a female connotation, but Witch-Men and Witch-Kings are just as common.

Warlock is a term for a magic user who joined a magical order, coven, or guild and stole knowledge and power from them before leaving. It's one of the worst names to be called, and bounties on Warlocks are common in magical communities.
Posted by Cacklecharm at 6:00 AM No comments:

Have you ever looked up the definition of a word you use all the time? Sometimes it can be an inspiration. The actual definition for spell seems to include “spoken words” and “incantations”, which I think is very interesting and telling. Many fantasy settings use magic as either a language, or deeply tied to it. It's part of the lore, you see.

I've always also been a big fan of the Paper and Pencils concept; but that concept was only used for researching new spells, not the spells themselves. As such, I wrote my own magical word spell system called “Incantation”. EDIT- The author of P&P wrote a new Magic Words system remarkably similar to this one.

Incantation
To cast spells, magic users must speak the words of power. Spells require the magic user able to be heard and speak to cast a spell Magic users can only cast so many spells per day or adventure, and the size of the magic phrases they can use depends on their level.

Casting a spell puts the magic user at the end of the initiative order. Casting a 4 word magical spell requires 2 rounds to fully pronounce.

Once a magic user knows a magic word, they can use it in any spell they wish. Magic users begin with 1 or 2 magic words, randomly assigned, and must find the rest through searching dusty tomes and manuals, or purchasing them from other magicians.

Spell Examples
One word magic spells tend to have a single, simple effect. Most effect one or two targets, deal maximum 1d6 damage or restore 1d6 health, and have temporary effects that last a turn.

Spells with more then one word have greater and more powerful effects, as a rule of thumb, each word's effects should stack as 1 word spell effects together. So a two word spell could target 1d4 individuals, deal up to 2d6 damage, etc.

More powerful spells can have more diverse and strong effects. The spell Heat Mortal could keep several men warm in a cold place, overheat and exhaust several men in a hot place, or could be used by monsters as a way to cook the flesh of a man and deal 2d6 damage to one target, etc.

Magic Word Research Rules
In order to research a magic word, a Wizard must spend money to do so. Usually, they will have to also have found a scroll or text. Converting the magic words into script for use in speaking your own takes time and materials. It costs 1000 coins to learn one word with the materials on hand, and a season of research.

Counter-Spell
If a caster knows the meaning of magic words being used against them, they may speak opposite words to cancel them out if they know them. Doing so expends their spell slot of the same level. If they can only counter a few words, the enemy spell is simply reduced to a lesser word spell.
Posted by Cacklecharm at 6:00 AM 3 comments: