This is the healing system. It was created to make healing a more active, full featured part of the game. Some complexity is involved, but none of it is present in combat. This system was created from the ground up to facilitate rulings over rules- and to give my Sage class something to do. Sages were the logical, thematic replacement to the generic robe wearing magic user for people who don't like traditional magic in TTRPG.

The original draft of this system was first made here. 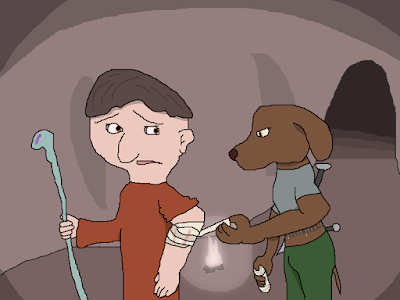 Taking Damage
Instead of counting down hit points, count up instead. Normally in a game, a Fighter with 20 Hit Points maximum is considered at maximum life and totally healthy at 20, barely scratched at 19, on death's door at 1, and dead/dying/rolls on death & dismemberment at 0. Instead, flip it. The Fighter with 20 HP maximum is considered right as rain at 0, barely scratched at 1, almost dead at 19, and dead at 20. Imagine Hit Points as the “points worth of hits” you can take before you die- similar to using wounds or a damage tracker. This makes more sense to me anyway- Life or Health is usually used for values that count down, hits and wounds count up instead.

Whenever you take damage from a hit, the Dungeon Master will tell you what type of damage it was. Write a letter or symbol by the wound you just took. If you're close to going over, add up your hit points and see if you're at your maximum or above- in which case, you die.

Addition is faster then subtraction, so combat is not slowed down. The only potential problem with this system is that somebody could make an error and not notice they went over their Hit Points- but unlike a subtracting HP total, an earlier mistake won't mess you up for several rounds in advance. I'd write each injury individually, which gives you a nice little history of your misadventures, but you could run several running totals for each damage type if you like. You can also keep a total Hit Point counter to save time and easily tell when the next hit kills you.

In many ways, this system actually speeds up combat. Now you can tell instantly what wounds are killing you. It also helps for special powers or abilities- the character who is resistant to bludgeoning damage just writes half the value down on their sheet, instead of doing subtraction twice. The werewolf can regenerate 1d6 hit points every round- except the silver wounds, which are now separate from their hit point total so you won't get confused.

Healing
In order to heal damage, you must spend an exploration turn taking a short rest. Characters can tend their own wounds or the wounds of other characters. In-combat healing is no longer a thing, except through magic items and spells, which was how it worked normally to begin with.

In order to heal someone, you must apply an item, remedy, a technique, use your healing hands, or some other method to cure their injuries. This ties into resource management. Sages get to heal people the most- as classes advance, they get to use more healing items per downtime turn to treat their bigger injuries (since they have more Hit Points); Sages get to spend additional items based on their level. Every healing item heals an amount of Hit Points based on its quality or effectiveness of the treatment.

Note: This healing system isn't literally realistic. Of course, in real life the only way for the body to heal is through its own natural process. However, this healing system is meant to evoke a sort of mythological and fantastical world where a bowl of chicken noodle soup can actually cure a cold. Injuries may still cause pain or be reopened in the context of the universe, but in the game rules they're considered gone and healed once the treatment is applied.

For example; a default clean linen bandage restores 1d6 Hit Points. Your character can wrap up any wounds that cause bleeding or are deep cuts- sharp wounds mostly. Sword cuts, animal bites, sawblade traps and so on. However, say your party has run out of bandages, or had to dip them in oil and use them as a torch to see in the dungeon. Instead, your character can cut up a piece of clothing or the old tapestries hanging on the walls and use them as a makeshift bandage instead. These bandages are improvised and only heal 1d4 Hit Points instead. You will erase the result of the roll from the appropriate category- any excess healing over the damage type is lost and has no effect on other damage types. This makes healing fast- you can just erase any wounds you've taken instead of having to add back up your Hit Point total again and again.

The purpose of this healing system is threefold- it adds complexity and resource management as well as providing a platform for player creativity. Even a very basic circumstance can be roleplayed and given more complexity. One character has several large quills sticking out of their body from an encounter with a Quill Giant. They want to use bandages to cure their wounds; but the DM stops them. “The quills are still stuck in your flesh- you will need to pull them out, painfully, one by one. This means it will take TWO turns to apply the bandages.” Now the player has to decide if its worth spending the extra time to cure their injury, or move on. Of course, another player could be playing a Sage, a healer, with a high dexterity score, tweezers, and multiple arms. The DM allows them to pull out all the quills in the same span of time as it takes to apply the bandages, as they would be fast enough to do it.

The third reason is to apply a setting and theme through your damage types, remedy items, and healing process- the basic game mechanics selling the fictional space. 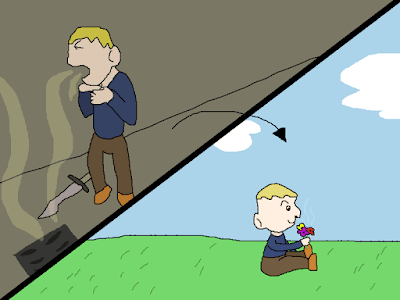 Damage Types
Most people know some basic first aid. In the fantasy world where monster attacks and sword fights are more common, people have some basic idea on how to cure themselves. However, mysteries can be a great a call to adventure to any, and a Sage may go on a journey to learn how to cure the wasting sickness that befell their village. Not all of these damage types and remedies may be known to the players- they may be hidden knowledge or found in secret tomes recovered from dungeons.

Every basic healing item removes 1d6 hit points of damage of its type.

Sharp damage from blades, claws, and arrows are cured by bandages.
Blunt damage from clubs, fists, and falls are cured by splints or casts.
Energy damage from fire, lightning, or acid is cured by ointment.
Cold damage from exposure and cold spells is cured by warming yourself up.
Miasma (Gas) damage from toxic fumes, choking winds, and fungal spores- cured by breathing “fresh vapors” and aromatic drugs.
Poison damage from venomous creatures or eating poison food. Cured by using emetic drugs that induce vomiting. Yes, even injected venom from a snake bite.
Terror damage from ghosts. This isn't just “fear”, but mortal terror that turns your hair white and can stop your heart. Cured by pacifying drugs.
Wasting damage from the touch of a mummy or having your blood drained by something. Cured by eating a hearty meal.

As you can see, all the damage types use a different first letter to make them easy to differentiate. If you're playing online, you could use different colors instead- useful for Roll20. If you want more ideas or to hear rambling nonsense about possible medical items or improvised medicine- read here. 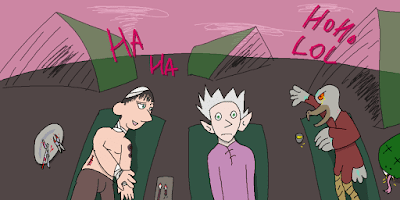 Extra – What about Health Potions?

All health potions are “Potions of Healing”- no minor or major or grand or whatever. They restore all your damage, instantly. You can't use other healing methods to heal in combat. This may be too strong- but if you make Potions of Healing rarer it would be have the same impact. You can also make health potions that heal specific types of damage, or an amount of damage, if you want to fiddle with rules more. Personally I like the idea of specific cures that can be used in combat- like a rubber-blood potion that seals up all your bleeding wounds, or a potion of liquid warmth which cures your cold damage and stuff. Doing individual amounts like traditional d8 healing potions or healing spells would mean that different damage types would have to have a sort of set order, or letting the players pick what they are healing. I feel like this works too- drink the potion to cure internal damages, pour on the skin to cure cuts and bruises, etc. So it's not a huge stretch to let a healing potion heal whatever damage types you want.

I also wrote this concept up in this alchemy ruleset- but I also like the idea of cheap or weaker health potions with a short shelf life- tonics. The idea if players can make or produce them on an adventure, to fit with the theme of being a magical healer, and to give magical healing for in-combat stuff, but they expire and can't be saved adventure to adventure to prevent the problem of stockpiling too many (or by contrast- never using them because they want to save them until later).