“We have three faces, to look upon the nature of good, evil, and everything between.”
“We have no hair, as we have no vanity. Instead, stuck to our heads are the coins given in alms to the downtrodden in righteous compassion.”
“We have four hands; an arm to fight the young warrior with his speed and rage, and an arm to face the old warrior with his skill and resolve.”
“We have three legs, as to be stable like the holy tripod.”
“We have no navel, as we are not born of this earthly realm.”
“Our eyes are clear; as we see through all deceptions.”
“You will not pass through this gate.” 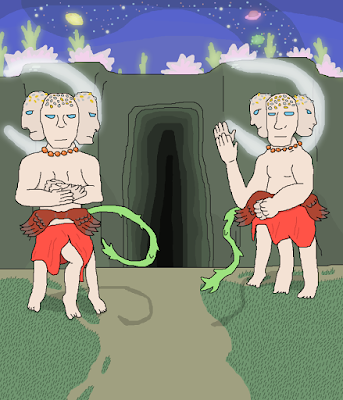 These two Celestial beings are bound with guarding a heavenly gate. Between the realm of the mortal world and the realm of the divine; gateways exist. Only those of worth may pass between. The Celestial Guardians make no attempt to stop the passage of great holy men, gods and demigods, heroes of renown, and those with a pass. They make no attempt to stop those coming out. For all others; you may not enter the Heavenly Realm.

These two beings are giants of divine nature. They are high ranking servants of heaven, but are not high enough in rank to be considered as Deva or Devi. As such, they have four hands but only two arms; they can wield up to four one handed weapons or do two-hand martial arts techniques with each arm, but still only get two attacks per round. They have three legs, which provide perfect stability- they do not suffer knockback or grappling effects that move them from their spot. They can fly and run faster then a horse. If they are on the ground, they can beat their wings to create a gust of wind that knocks back all projectiles, elemental blasts, and flying enemies except unerring arrows or those tipped with metals heavier then lead.
They also possess a thistle tail which requires an attack roll. On a hit, the target is paralyzed for one round, no save. If this move is used against living trees like Ents, Xyloids, or other wooden beings their bodies explode into fresh sapling growth and vines that cover them; that character or being is killed and their soul is released to the great wheel as their body nourishes fresh growth.

The Celestial Guardians are masters of combat, and guard the gates to the Celestial realms at all times. They have no human weaknesses; they never sleep, eat, or have their attention drawn somewhere else. As Celestial beings, they cannot be caught unaware by any mortal methods. Even invisibility is too conspicuous for them; they can see the dust motes in the air around your body as it creeps up on them. For these reasons; the Celestial Guardians almost never miss an attack. They can declare any attack they have missed as a glancing strike instead; the shockwave of their palm strikes still dealing 1d4+1 magical, irresistible damage to their target.

The Guardians possess flawless, ageless divine bodies. Celestial Beings are immune to level drain, poison, disease, and save or die spells and weapons. The sole exception to this rule is a vorpal sword, which upon an attack roll of 20, you must roll two more twenties consecutively to behead them, one for each head, otherwise all three heads remain firm. The Divine entities are also immune to fumble rolls. If they roll a 1 on an attack or save, treat it as a natural roll of 20 instead.

The Celestial Guardians know the Divine Word. This powerful spiritual word is a magic word above the other Words of Power. As such, if a magician attempts to use a magic word, one of the three heads can shout this word and silence it in their throat. They can also speak this word themselves freely to alter reality- the divine word can be put in the place of all lesser sorceries. Consider one guardian capable of casting any worldly spell, up to three a round, simultaneously.

Finally; the Guardians are masters of martial arts. They can perform any worldly martial arts, and know all martial arts styles. They can instantaneously switch to any style they choose and can counter every style, except the Way of the Left Hand. Every time they make a successful To-Hit roll with a fist attack, they may add one of the following secondary effects. They will choose whichever is most tactical for the situation at the DM's discretion, but you can also roll randomly.

Celestial Martial Arts Effects Table- Roll 1d8
[1] Aneurysm- The attack has created an internal aneurysm. Next hit deals double damage.
[2] Disarm- Disarms or breaks the weapon the victim is using. Magic weapons get a save.
[3] Disc- The momentum of the blow has created an air disc, which flies at the target next round. The air disc has an attack of +4 and deals 1d6 damage on a hit. Attack roll or save to avoid.
[4] Chakra Blocker- Target has become weak to paralysis. The next time they are struck by a thistle tail or a paralyzing move, they are paralyzed for one hour. Ignores immunity to paralysis.
[5] Mist Fist- Target is pushed back through a divine mist that appears behind them. They reappear at the base of a holy mountain; Celestial Gateways are usually built at the top.
[6] Ennui- Target loses the will to do anything, gets disadvantage on all rolls. Most motivate self one round to clear the effect.
[7] Concussed- Target is struck in the head. Forgets a spell, martials arts technique, or why they are trying to pass through the gate in the first place.
[8] Shakes- The target loses -1d6 Dexterity. This is righteous stat damage, and cannot be healed with holy magic or healing powers from prayer.

Also the Celestial Guardians can summon any weapon they want from the Celestial Armory or an Astra if they really need it, not that they do.
Posted by Cacklecharm at 6:00 AM