Post where I recommend a bunch of shitty itch.io games

So yesterday's post was kinda negative, so let's make this one positive instead. All these games are free or pay-what-you-want, so you don't think this post is advertising! They're also not all technically from itch.io, but you get what I mean. If you're here still waiting for (good) tabletop content, come back tomorrow. The 21st, I told you. I promise. 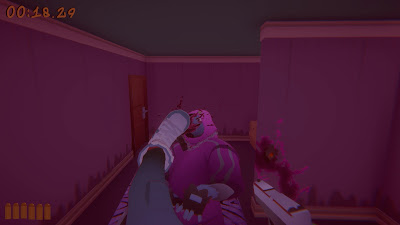 Anger Foot
This game is a lot of fun. Short and sweet; it's a very Hotline Miami-esque FPS, all about fast action and slaughtering enemies. My only complaint is the beginning part of the last level; way too hard. It is total bullshit. You'll know it when you see it. The game itself is like 45 minutes long btw, so this is perfect if you want some fast paced action. 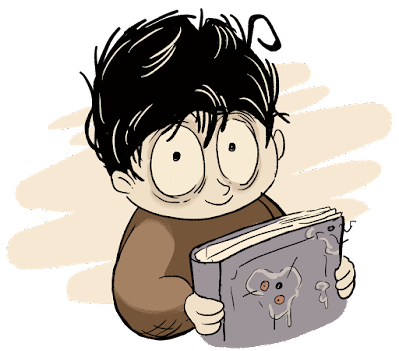 JARS
This game is all about a young Victor Frankenstein- it's a strategy/puzzle game with some progression between levels. Basically, you break Jars on shelves to open up minions, gadgets, OR reveal enemies who will attack the caskets, which you must defend. It's great, has a few hours of content, and is still in early access. The artstyle is also gorgeous- very Don't Starve esque, and totally adorable. I'm watching this game's development and may even purchase a full and polished release; it's right up my alley. 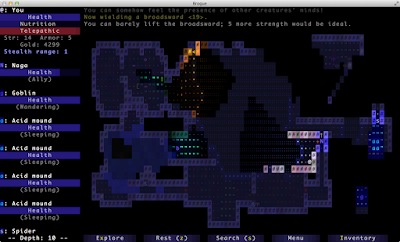 Brogue
Brogue appears as a fairly standard ASCII roguelike clone, but it is anything but. I'm also cheating here, as this isn't technically an itch.io game- don't get confused. There are some Borgue MODS and alternate versions over on there, but I'm referring to the main one, found here.

Brogue is a surprisingly nice-looking game with some fantastic design. Basically, think of a generic Roguelike- but with no level ups or character races or classes. Your character is a generic adventurer. You advance in the game by finding potions that permanently improve your strength- health potions also increase your maximum health as well as fully heal you, giving you a strong tactical usage for them. It's design is something I find very appealing in the realm of unique tabletop game ideas; I feel like I've had to have talked about this one on my blog somewhere before; maybe for a scheduled post in the future? I'm not sure- but Brogue is just fantastic. Don't be put off by the fairly generic picture above; it makes EVER pixel of that ASCII art shine! I might even like it more then the de-facto Roguelike in DCSS. It's just that good. 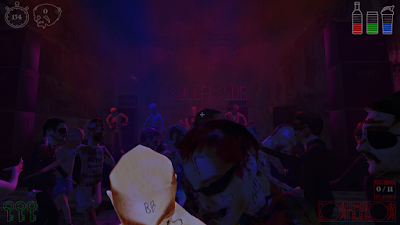 HitOthers
The final game- a really weird one. Made by the band Bullerslug back in the early '10s, you are let loose in a bar with a time limit of one song to either find the three keys and escape (the lame ending) or find the gear and play a new song (cool ending) while hitting others. I remember first seeing this game in a random streamer's indie game collection stream like 5 years ago, then suddenly stumbling upon it again after forgetting the name, and here we are.

I actually really like the design of this game. Basically your health and stats are one in the same; you drink various color-coded alcohols to increase your attack, health, and speed while taking damage reduces them at a similar rate. You mash the mouse button to HIT OTHERS and are supposed to be beating people up to either increase your score and/or get the items they are carrying. The second quest or ending of this game allows you to play any song that you have collected from hitting somebody in the bar and taking the album from them when the countdown at the end of the HIT OTHERS song is over. This means you can basically listen to whatever songs you want by these artists in this game; so you could think of this game a bit like an interactive album with a small challenge to unlock the songs! Fair warning, the game is a little buggy and fucks up your wrist since you have to mash the mouse button to hit, and the mouse sensitivity is all weird giving some strain for playing it. It's still kind of a fun little beat-em-up with a unique atmosphere.

However, the most interesting thing about this game now, and why I'm posting about it here, is that the game's official website is now offline. So is the band's website. As far as I am aware, the band has only produced one album, (Cheer up, goth!) which is the one in this game. I don't know anything about the people in this band when it was about; did they break up, or did some of them die? Are they still around, but just playing in the underground Amsterdam music circles and are off the grid? I have no idea. But this game remains- and there is a literal band on the stage in this game. Not only has this game outlived its creators but, in a way, it's a time capsule to the music they did make. From making a game to advertise your music, to the game being all the remains. Long after the creators are dead, and all of us are dead for that matter, the band in this game remains, the party never ending. While you could say this is true in every form of media, a game where someone's art is continued on gives me the feeling of its own mysticism.