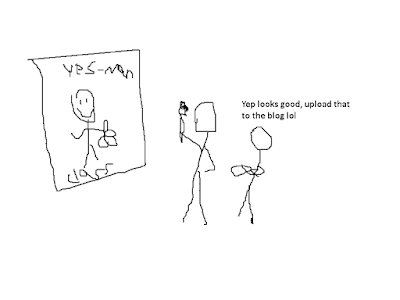 You're the right hand man. The flunky, the sniveling kiss ass. Your only goal, it seems, is to suck up to others at every opportunity, and crowd around them both for more opportunities for yourself as well as the pleasure of having others approve of you, if even you have to be a cowardly weasel to do it. Playing as an actual weasel-person for this class is not required, but recommended. You get +1 to stealth rolls regardless of what race you are; it's in your nature.

Firstly, you always must have a Boss. This is your sensai, boss, my lord, the champ, your majesty, or some other being of a higher status then you in some way. You must always refer to them as such and cannot turn down reasonable demands. For unreasonable demands, you get a saving throw to weasel your way out of them if you so wish.

You may, at any time, abandon your boss if your new “boss” has a higher level or HD then your old one. You can also switch over to a new boss if your last one is defeated by another one either by combat or through some kind of display of skill or public humiliation.

Your main ability is to improve others. By constantly fawning over someone and doing whatever you are told, you improve their ability score modifiers by +1. This applies only to things that person is already good at, or better at you at. So if you compliment the boss's manly muscles and sharp wits, then he'd treat his Strength and Intelligence modifiers as +1 higher. If he was self conscious about his looks however, then you cannot give any bonus to his Charisma modifier.
This only applies to rolls made with these ability modifiers, not the modifiers themselves, and as such only apply to rolls as opposed to fix powers or abilities that deal with these modifiers. It's a confidence boost, not magic.

Starting at 4th level, you can do the above boost but for magical or supernatural powers as well. This makes your magician boss have his spells save at -2, or makes the Fighter who you call your boss get an extra use of a supernatural blade art he has mastered.

You have a posse. Starting at 2nd level, you can draw others to your posse. Despite being the Yes-Man, you still have a decent amount of Charisma to make others into your Yes-Men. You're the underling, and they are the underlings beneath you. You can use the boss's Charisma modifier in place of yours to control them, if it is bigger. You can have a number of flunkies equal to your level rounding down. Flunkies are equivalent to 1 HD monsters or untrained militia in combat.

At 10th level, you become a Spineless Sycophant. At this point, your powers of brown nosing have grown to an almost supernatural level. You can not only enhance your bosses abilities, but the abilities of his own lieutenants or high powered bodyguards (even if they aren't "higher ranking" then you, in the eyes of the boss). Also, you can acquire most regular items or simple services of a sum up to 10,000c practically on demand in a populated area. You can only do this if your boss is also HD 10 or level 10 or higher. This power lets you intimidate, call on favors, scrounge around the dredges to find your need.

Additionally, you can at any time kill your boss by stabbing them in the back. Doing so starts you over at 1st level as any class of your choosing. You get +1 hit point for each level you had in Yes-Man before you backstabbed your boss, and get to keep the +1 to all saving throws bonus. Doing so will mark you permanently as a betrayer, and you will be unlikely to find people who trust you from now on; the Gods will even deem you as worthy of contempt; expect curses and a bad afterlife in store if you can't find a way to weasel out of your just deserts.
Posted by Cacklecharm at 6:00 AM

Email ThisBlogThis!Share to TwitterShare to FacebookShare to Pinterest
Labels: Classes