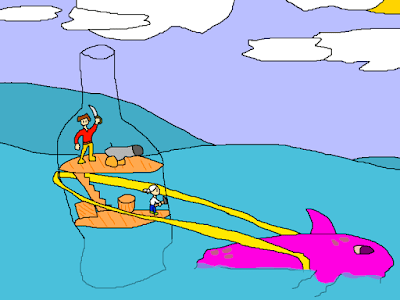 Government Style – 1d10
[1] Democratic, each boat captain has a vote.
[2] Oligarch. Some captains own multiple boats, all about money and power.
[3] Royalty. Royal bloodline is magical and king/queen can turn into a fish or can breath fog at will.
[4] Elders. The most experienced sailors get to lead, very senile.
[5] Parental. Impossibly lascivious pirate leader has an entire fleet of offspring.
[6] Religious. Leaders must be chosen by sea gods, can see visions of the future in clouds.
[7] Scripted. Everything the community does was written on extremely detailed and massive treasure map. Has vague answers whenever they need advice, they believe its all been planned out.
[8] Trial by ocean. Everyone interested in leading is tied to boat and tugged along for 3 days, only rarely do people survive and become leader so it keeps most of the riff raff out.
[9] Enslaved. The sea captains must serve deep ones underneath the ocean. They sneak on board every full moon to kill upstarts in their sleep and whisper demands from their sleeping gods.
[10] Corporate. Entire fleet is trading/piracy/adventuring guild. The bottom line is most important.

Method of Transport and/or Defense – 1d10
[1] Massive lashed leviathan. Could probably drag the whole fleet down into depths if it wanted.
[2] Advanced windmills instead of sails on all ships; power great rotating engines of rope and wood.
[3] Ships are animated and 'alive'. Lash enemies with rigging, fire their nails out like bullets, etc.
[4] Absolutely massive number of oar-slaves.
[5] Fleet has 1d4 storm mages who can manipulate weather. 50% chance they are the leaders.
[6] Gigantic magnetic anchors pull ships around. Ironclad vessels within a mile fuck it up.
[7] Vessels are 'solar' powered, energy letting them skim the sea fast during sunny weather. Dead in the water if its gets cloudy and at night.
[8] Wish-granting goldfish in hull of most defended ship. Cranky but begrudgingly grants weak wishes, biding its time until somebody can free it.
[9] Ships have special scuttle gates and storage tanks in its hull that let it move around water, can conjure small tidal waves behind them to ride or in front as a form of attack.
[10] Gigantic flock of tropical birds. They are magical and if many beat their wings together can create winds strong enough to push ships or cause minor storms.

Method of Sustaining Themselves – 1d12
[1] Massive hydroponic garden dragged behind them at all times, plants tied together by the root.
[2] Every ship's top deck is filled with at least a few dirt and crops.
[3] Good old fashioned whaling. Usually got a corpse or two they're dragging along.
[4] Cannibal pirates.
[5] Large herds of animals in the below decks. Animals mostly fed seaweed and chum.
[6] Mostly each the barnacles that grow on side of the ship and whine about being hungry.
[7] Huge net cannons let them catch entire flocks of seagulls.
[8] The crew are all undead. A jar of dirt can be used against them as Turn Undead.
[9]They're all termite people. Eat captured ships, sometimes cannibalize their own.
[10] They 'eat' precious metals, gemstones, and treasure. They wear it and absorb it slowly through their skin, which slowly corrodes it to ash. They must raid other ships or face starvation.
[11] The crew are magically bound to revelers back in seedy pirate haven island. The revelers screw, eat, and drink and sustain the crew's needs. If these revelers were killed, crew would starve to death.
[12] Wooden gargoyles carved into side of ship act as lookout points to stare down into ocean. Crew dive into water headfirst from ship and catch fish bare handed.
Posted by Cacklecharm at 6:00 AM