You get a rumor each time you ask a fisherman in town for a story or rumor. Each rumor has a 1 in 6 chance to be true. If multiple rumors are true, they are all tied together in some strange way. If none of them are true, then this is the most peaceful town in the world. 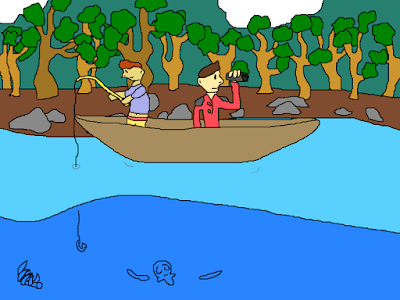 Fisherman Tales – 1d10
[1] He once caught a huge eel, which the family cut into round slices that never spoiled. He says his wife has still got one sealed away somewhere.

[2] Once he took a nap in his boat, and when he woke up he saw a river shark dancing on the surface of the water. As soon as he gasped, the shark jumped back into the water and pretended like nothing happened.

[3] Strange orange flickering lights are seen under the water on Sunday nights. If there was a new baby born that day, the lights turn blue and spin in circles instead.

[4] Secretly there is a current in the lake that can whisk a boat out to sea in the span of an hour. You have to knock on the right rock three times.

[5] The fish in this lake are just fine with worms, but if you want to catch the really big ones you have to bait your hook with human flesh.

[6] When it rains, a lonely fish man comes to the shallows to look for his lost love. If you leave a necklace of shells and bones by the shore, you'll sometimes get a glimpse of him dashing out of the water to grab it, before retreating to the depths.

[7] Once, I caught a talking fish. It said it was my grandmother, and said if I let her go she'll tell me about buried gold. I did let her go, but that bitch just swam to the bottom and disappeared.

[8] There was once a little boy in the village who could clap his hands and fish would jump onto shore or into his boat. But he became a soldier and went off to war.

[9] There's a giant crab in this lake. It's shell could be made into nearly impenetrable armor. The only thing that draws it to land is the music of a flute.

[10] Many years ago, an evil cult sacrificed virgins in this lake by tying rocks to their feet and drowning them. Their bones are still down there.


Each fishing boat can be purchased from the master fisher or local lord of the village. He has 1d4+1 boats. If you roll a 4+1 assume that they are all collecting dust and he'll give a 20% discount.

[1] Armor Boat
Very strangely painted boat, with all kinds of metal joints, rivets, and straps on the inside of it. If dragged onto land and given about an hours time to twist the knobs, the boat collapses and reforms into a bulky suit of armor. Counts as platemail, but made of wood and has its AC permanently lowered by -1 each time an axe strikes it. Takes half as long to snap it back into boat form.

[2] Magician's Canoe
The front of this small boat has a carving of a horned woman, with polished stones for eyes. By smacking the side of the boat with an oar three times, the eyes release a blast of Magic Missile straight ahead, dealing 2d4 damage. It will require a large amount of skill to coordinate the boat's facing with the three oar taps to hit a moving target, but its trivial to hit something stationary.

[3] Razor Hull
Fatter then a normal fishing boat, this one has metal straps built down the sides studded with very sharp hooks and spikes all along its underside. Creatures who try to ensnare or ram the boat will take 1d6 damage if they do, and creatures with tentacles will be unable to get a grip.

[4] Unsinkable Raft
Large flat square raft, no sail or discernible features beyond its strong ropes that bind its logs together, which have been painted white. If the raft ever sinks, you can simply speak a keyword to raise it from the depths, lashing itself back together on the surface as much as it needs to and tightening its ropes around whatever is left of the wood. It is actually the ropes that are magic, not the logs, and by simply tying the ropes around anything underwater and saying the keywords they will raise it up. It can lift something as heavy as a boulder.
Posted by Cacklecharm at 6:00 AM