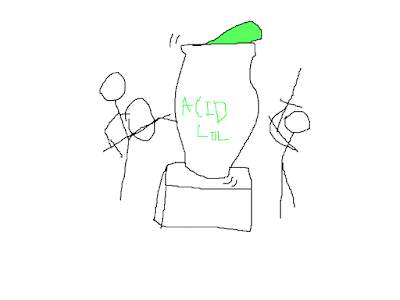 [1] Sand or loose gravel. Can be thrown in people's faces or to loosen footing.

[2] Barrels or boulders atop a slope. If cut or shoved loose will roll down at people below.

[3] Hanging chandeliers, ropes, or vines. Can swing across them over enemies or drop down onto them from above.

[4] Tables. Can be flipped to use as cover, or can be jumped on for swashbuckling.

[5] Activate forge, oven, or fireplace. Can try to shove people into it to light them on fire, or pull pokers/hot iron bars out of the fire.

[6] Sentry tower or high platform. Can be climbed for a high spot defended against enemy attack but if the tower is knocked over you'll die in the fall.

[8] Spikes or spears against the wall. Push people into them to cause death and injury.

[9] Metal rod or lone tree in the middle of a lightning storm. The first person who touches it gets blasted by lightning.

[10] Winery. Goblets can be splashed at people to blind them or bottles thrown/used as weapons.

[11] Stalactites. If struck with a ranged weapon or spell will fall down straight dealing damage.

[12] Stalagmites. Knock people down or backwards onto the spikes. Going between them can protect you from aerial attackers.

[13] Clockwork gears of a great machine or clock tower, dwarven workshop, etc. Shove or catch people's body parts into the machine for them to get dragged into it and killed by the grinding gears.

[14] Grasping zombie or prisoner hands reaching out from cell bars or holes in the wall. Save to break free or spend a turn cutting arms away.

[15] Ruptured slimes, oozes, jellies. No longer animate creatures but their acid still burns on the floor. Shove someone's face into it to burn them.

[16] Shipwrecked. Use the rigging as a net to catch to catch fish or people in a giant trap.

[17] Torture devices. Grapple people to shove them into or onto the devices.

[18] Beehive on tree branch. If knocked down the bees attack the closest living thing.

[19] Sharks in the baptismal font.

[20] Vampire lair. Heavy black curtains block the windows, pull them back to let in the light.

[21] Chains on the wall of the dungeon. Can be used as weapons or to block attacks. If the manacles are snapped shut on someone's arm or leg it's unlikely they'll have the key.

[22] Beasts in cages. If released they will turn on those who tormented them first, then to anyone who looks weak enough for an easy meal.

[23] Huge glowing masses on the ceiling. If broken liquid light comes down and covers everyone underneath, making everything but those splashed now dark and dim.

[24] Giant beast's skull, open in an eternal roar. If hit or pulled can snap shut on someone, dealing as much damage as if the beast bit them.

[25] Torches along the walls. Easily lifted and used as weapons.

[26] Massive pile of dust and leaves brushed into the sides of the hallway. A single spark could ignite it all.

[27] Giant decorative urn; topple it on someone.

[28] Poison barrels. You can dip your weapons in them and attack or try to spill them on people with wounds to further harm them if it seeps in.

[29] Giant heavy gong. Cut it down and roll it at people or use it to smash a wall and absorb gun fire like Indiana Jones.

[30] Dead people. Use their corpses as shields, or dive among them and play dead.

[31] Bubbles coming from the swamp. So thick and viscous that they can be grabbed and thrown. If lit on fire they explode, but if they hit someone's face they will stick on and make it hard to breath.

[32] Snowfields. Yelling loud enough will trigger and avalanche but you might get swept away too.

[33] Huge prayer candle set. If knocked over the burning hot wax comes out like a flood.

[34] Harvest baskets. Throw them on people's heads or hold them to block one arrow.

[35] Bookshelf. Topple it on someone or stab between the shelves.

[36] Catapult. Get someone on the bucket to launch them or make them stand up enough so they get splattered by the arm against the crossbeam!

[37] Fight atop the branches. If you get closer to the trunk you can cut off the rest of the branch to make your opponent fall.

[38] Two men fall into a giant spider's web. They are still fighting to death among it. Even better if they try to reach out and grab the 'trigger' strands of the web closer to the other man.

[39] Fight inside a small sized room with paper walls, similar to Asian styled architecture. Any attack that misses gets the weapon stuck through the wall, forced to get pulled back through the hole it made. Slashing weapons can easily cut a hole that you can just walk through.

[40] Fight atop a log over a river. Hard to keep your balance, fail and fall into the river.

[41] Giant globe of the campaign setting. Draw an enemy weapon into it, then spin the globe to knock it out of their hands.

[42] Huge harem mattresses. Can be hoisted up and toppled on people to distract them for a moment. Flammable.

[43] Special alchemical liquid that freezes at room temperature. Break the giant holding tanks when someone stands next to it with a blunt weapon; the waterfall that comes out freezes and eternally traps them in ice.

[44] Enchanted field of flowers. Anyone who tramples a flower is hit with an arrow from God.

[45] Central bank. Giant scale becomes centerpiece of a battle. Heavily armored warriors are lowered to the ground, lighter armored ones are hoisted up.

[46] Magnetic ceiling. If you are disarmed or let go of your weapon it goes straight up.

[47] Minecart tracks. Push the cart hard enough to barrel it into enemies that stand on the tracks.

[48] Giant mushrooms, dusty old silk sheets, crypt hangings, etc. Shake them to cause a rain of dust to come down, causing everyone to spend a round coughing and clearing their eyes.

[49] Swinging axes like a pendulum. Grab hold to ride it away or tempt enemies into its path.

[50] Swallowed by a great beast. Fight in its belly.
Posted by Cacklecharm at 6:00 AM