FLASHBANG is a game I cooked up while thinking of new and interesting ways to use the OSR playstyle and general gameplay in other settings and time periods. FLASHBANG is a game about tactical modern day "dungeon crawling", your party plays as SWAT.
Out of all the rulesets and complete games I've ever made, I'm pretty happy with it. Probably one of my best, due to its fast speed and simplicity. 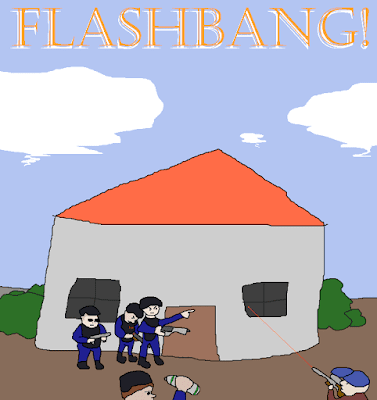 Character Creation
You roll 3d6 for each stat. If you're the best of the best, you get 4d6 drop lowest instead.

[B]ody is your physical strength and toughness.
[R]eaction is reaction time to fire weapons.
[E]ducation is knowledge skills.
[A]gility is avoiding gunfire.
[C]are is empathy and first aid skill.
[H]eroism is luck and heroic stunts.

Classes
Once you roll your stats, time to choose a class.

Pointman uses point-blank weapons.
They get +2 to-hit point blank and +1 HP.
Their maximum AC is 18

Technician uses support weapons and kits.
They get +2 to using kits and field repairs.
First adjacent explosion is counted as clipped.
Their maximum AC is 14

Negotiator uses support weapons.
They get +2 to social checks and can offer themselves as 1 leverage.
Their maximum AC is 12

Sniper uses long rifles.
They get +2 to hit and damage.
Their maximum AC is 12

The final class is special, and only the person with the lowest stat modifier total may play a Rookie.

Rookie uses support weapons.
They get +4 to their first heroic stunt. The only class that starts at the 'Recruit' rank. Once they reach the rank of Agent they get +2 to a stat for free and must pick a new class.
Their maximum AC is 14 until they change class. 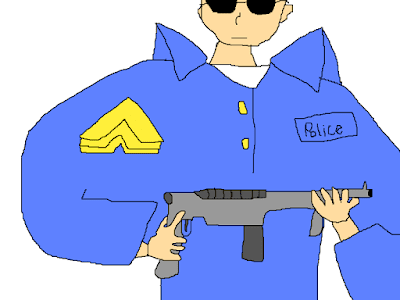 The first time you are hit by a firearm attack that deals 1-5 damage, you are clipped and your armor is reduced by -2 AC. You are in pain and take -2 on all actions unless given an injection or first aid. Even after being healed or switching your armor, you still count as clipped and the next roll does normal damage.

Any roll of 6 or more is considered a lethal blow, usually a headshot. If you drop to 0 HP, you're out but might be saved if a professional (not medic) EMT treats you. Anything under 0 is death.

Combat
Whenever you shoot with a gun, roll d20 + reaction modifier vs the target's AC + cover. On a hit, you roll the gun's damage. On a miss, you must reload. Roll 1 to jam your weapon.

Your AC is determined by your armor + agility modifier and has a maximum based on your class. If you switch armor with a dead person that's better then your own, your max is the cap.

You can do field first aid. Heal 1d2 + care modifier as long as you makeshift materials.

Cover grants bonus AC to your character, avoiding the chance of them getting hit by gunfire. Cover from furniture grants +2 AC per person it would take to lift it. You can grant covering fire by shooting at any enemy that could shoot at your allies. Roll your weapon's damage and add that to your friend's AC as they move.

Heroic Stunts
To get a hostage to do anything risky, jump from rooftop to rooftop in hot pursuit, or throw a live grenade back at the guy who threw it, roll a d10+heroism modifier.
Normal target number is 6.


Negotiation
Criminals will make demands, usually on radio. If you don't give in to demand officer must roll 2d6 + leverage. If under number of hostages they will kill one. If you give demands the criminals get;

Unlike in real life, police cannot 'trap' these options.

Leverage
Each demand you give in to the criminal grants 1 leverage. Leverage can be used to free one hostage from the bad guys, or could be turned in to get one near the window.

You get -1 leverage if you kill one of the criminals. Negative leverage subtract from your negotiation rolls to avoid them killing more hostages.
Grenades
Everybody gets 2 grenades on a mission. You can scavenge other grenades as they come.

Submachine Gun deals 1d6 damage.
Reloading takes 1 round.
Spray & Pray attack two enemies at once -2 to hit. Must reload after, even if you hit/kill both.

Long Rifles
Scoped Rifle deals 1d10 damage.
Reloading takes 2 rounds, must reload every use.
Can fire from building to building.

Iron-Sight Rifle deals 1d10 damage.
Reloading takes 2 rounds, must reload every use.
Use a round to Aim and add +3 to next attack.

Support Weapons
Pistol deals 1d4 damage.
Reloading takes 1 round.
Everyone has one. Plus you can use two at -2 to hit, raising damage to 1d8 if shooting one target, or make two shots at -4.

Burst Rifle deals 1d6 damage
Reloading takes 1 turn.
Use a round to Aim and add +2 to next attack.

Special Weapons
Specialists start with one of these each mission, either based on the mission, randomly assigned, or based on personal preference.

Roll 1d6 or choose
[1] Battering Ram: Can be used to bash down doors or 1d8 against enemies.
[2] Riot Shield: Immune to melee attacks while using, grants +2 cover bonus to AC
[3] Grenade Launcher: Deals 1d6 explosion damage to enemies adjacent to target.
[4] Light Machine Gun: Deals 1d12 damage, but has -2 to hit and is loud as balls. Reloading takes a minute or 10 rounds or so.
[5] EMP Scatterer: Turns off digital enemy devices, including traps and cell phones.
[6] Beanbag Shotgun: Deals 1d8 nonlethal damage, can fire willy nilly into crowds and can punch through shallow walls.

Kits
Given to technicians based on the type of mission, or just roll randomly.

Roll 1d4 or choose
[1] First-Aid: Can remove the clipped condition and heal damage. Heals 1d6 + care modifier.
[2] Defuse Kit: Used to disarm bombs. Roll 1d6+knowledge modifier over bomb difficulty. Most bombs have a difficulty of 3. Failing this roll means the bomb cannot be disarmed and has a 1 in 10 to instantly explode. They'll need the robot.
[3] Lockpicking Kit: Takes 1d6 minutes – knoweldge modifier and can pick locks silently.
[4] Drone Kit: Rolling or flying drone can be used to spy on enemies. One hit disables it. 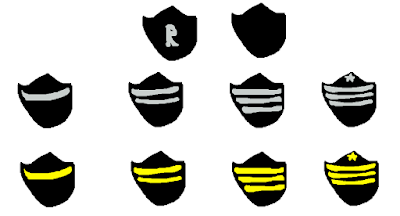 Experience & Progression
Completing mission objectives grants experience, which grants you advancing ranks. All classes except the Rookie start at 'Agent' Rank. Having higher ranks essentially lets you get slack from the boss, letting you change your basic loadout and perform actions more freely.

Promotions
Every time you advance in Rank, you get +1 maximum HP and a bonus chosen below. Agents can pick only from the Agent list, Officers can pick from the Agent OR Officer list.
Unless otherwise stated, you can take the same bonus any number of times.

Agent Promotions – Pick or Roll 1d6
[1] Deploy to a mission with +1 grenade.
[2] Maximum AC increased by +1.
[3] Your pistol is replaced with a revolver, which deals 1d6 damage. Only take this once.
[4] First time a bullet would kill you, miraculously deflects off your badge; right over your heart. Can only be taken and used once.
[5] Increase any stat by +1
[6] Heal +1 health any time you use a medkit.

Officer Promotions – Pick or Roll 1d6
[1] Select one weapon or kit on the equipment list, you can deploy with it whenever you wish. Ignore class restrictions.
[2] You can be clipped another time on a mission.
[3] You deal +1 damage.
[4] Roll 1d12 when doing Heroic stunts. Can only take this once.

Retirement
When you reach maximum rank, you can choose to go on one last mission. Your new rank is “One Day from Retirement”. Enemies roll 1d12 as damage dice against you. If your gun jams it explodes in your hand dealing 1d6 explosion damage to you. If you manage to survive this mission congratulations, you win the game.
Posted by Cacklecharm at 6:00 AM