The Secret World is an MMO that once had some very strong marketing presence. I'm sure if you look it up somewhere you'd find the details, but basically the secret world wasn't even announced at first and instead there were secret images and codes which eventually lead to details and discover to get people interested. Eventually the game was announced and, since it was buy once and play forever instead of a subscription fee, I ended up getting it myself. 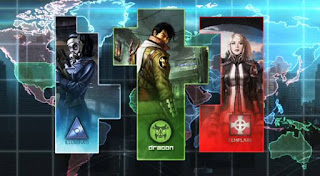 I really do love TSW's conspiracy “all myths are true” style world, and since I had just finished reading Unknown Armies's rulebook at the time I was really into it. Playing the game off and on for a few years though and I was honestly kind of disappointed. The game had 8 play zones, the questing and leveling portion you do before the dungeons. While the quests and missions and writing was great, spectacular even, the limited locations really bugged me.

For a game about traveling the globe, basically being occult secret agents serving vast conspiracies with ancient technology and magic, the actual places you go feel very limited- you only end up going to 3-4 places in terms of exploring the world despite having 8 in game maps. Obviously being a video game and a massive multiplayer one at that, the development team has to cut corners and has limited resources. But in the imagination land of tabletop gaming, we don't have to.

Quick aside; I haven't actually finished the main story of The Secret World yet, if I ever will, so I don't know what actually happens beyond the basics. The first three are from the game, the rest is me adding in some new ideas. 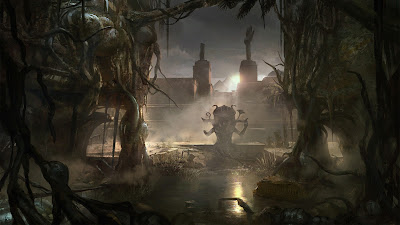 10 Adventure Locations
[1] New England- Kingsmouth Island
Stretch of coast infected by zombie monsters, dead men and women raised from the magic of something stirring within the deep sea. Sasquatches defend nature while Wendigos come out of hiding to feast upon the flesh of men. There is a secret university of magic and a haunted amusement park, all leading to the history of this place. Discover the mystery and magic of the Native American tribes and Viking visitors who fought off this evil once before.

[2] Egypt- The Scorched Desert
Baking hot desert sun rules over this land in Egypt, while a shadowy new cult worshipping a sun god named 'Aten' has been rising to prominence. Locusts of myth, ancient Egyptian entities and ghouls have become more bold even in these modern times, rising to feed off humans. Underneath the desert there is a valley, ruled by a dark black sun, the black pyramid of Aten waits silent.

[3] Transylvania- Besieged Farmlands
The far off forests of Eastern Europe, filled with rising vampire cults and werewolf packs. Old beasts of nature rise to defend it; Gaia's magic is so thick you can almost see it. The vampires gather in preparation for the coming of Mara, the vampire queen.

[4] Mexico- Shadow of the Temples
The deserts and jungles of central America are buzzing with a stirring darkness of the past. You've followed the trail from the North America, from the invasion of the Aztecs serving their dark beasts and Gods that promise the end of days; now you've come here to find the source. Even once you make it past the hell breaches that have the religious locals terrified, the chupacabra may just suck out your organs. The blood of all those ancient Aztec sacrifices still exist, a sea of torture beneath the temples.

[5] Himalayas- Virgin Snow
White blinding snow and the among least hospitable place on Earth hide secrets. Ancient KGB experiments run amok in the mountains and yeti harass the lonely temple monks. There is an ancient power here, sealed away by prayer and ritual, high within the mountain peaks. There is a light coming from one of the mountains at night, calling as if for someone to come and free it.

[6] Greece- Roman Exile
An island hidden from both satellite imaging and from boats as well, an old roman fort looks out to the sea. It's fiery braziers still lit by some unseen hand. Ancient sorceries, still rule here, and very real creatures from greek myth seem to be living on the island as well. There is a labyrinth at the heart of the city, and if you find its center you may find a secret that undid the Roman empire. But be warned, as the Minotaur lurks the hallways.

[7] Atlantis- Ancient Sunken City
The history lessons taught in normal schools are of course intentionally full of holes and totally incomplete. The conspiracies saw to that, and they also see to drive off all competition from the recently discovered location of Atlantis, the sunken city. It has been claimed by the sea now, and the deep ones lay their own gods to rest, feeding on the city's ancient power.

[8] India- Cycle of Destruction
India is a land of old mystics and the untamed wilds just outside the village, and it still is to this day. Despite the growing hunger of the demon rakashas, and the rapidly modernizing bandar-log monkey men; the greatest of all of course is the rise of its old gods in crumbling temples. They yearn to destroy this world anew, to be part of its cycle of rebirth once again.

[9] Australia- The Dreamtime
The ancient Gods of magic and myth, sleeping since the past of the Dreamtime. The Australian desert is rife with dangerous wildlife, but its interior desert and mountains hide the truth of even older predators of spirit and anima, those that still walk the outback. The first root of the world tree Agartha rests here, and you must find who is poisoning it. The dreamtime must never come again.

[10] Hyboria- Origin of Man
Finally, your travels lead you to the Arctic north, beyond the Arctic circle, to a land of four strange suns. This place is cold, but beautiful beyond any mortal keen. This place is the origin of the first man, the first women, and home of the truth. The filth cannot touch this place, nor shall it ever, but could Hyboria be a womb for a new breed of inheritors?
Posted by Cacklecharm at 6:00 AM