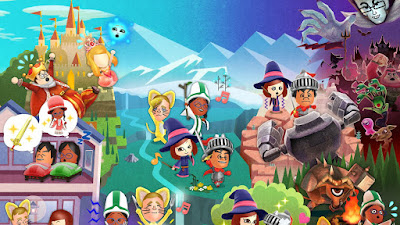 While I haven't played the game myself, I've seen several videos and know someone who has played the recent Miitopia game. I think the turn based battle system, while very simple and obviously easy since it's more of a fun casual Mii game is pretty good. But most interesting of all is how characters who bond throughout the adventure actually get in-game bonuses to their actions during their turn.

Many new roleplaying games, both rules-lite and retroclones, seem to be fond of character bonds, which for those who don't know are sort of like generated roleplaying in the game's character creation. I feel as these two elements could be combined together to create a sort of character growth and relationship building exercise.

Bonds & Friendship
Every time you fulfill or complete a bond between two characters, write down the other character's name and a +1 on each character's sheet. This is their relationship or friendship level. When one of these characters saves the other's life, add another +1 to their bond.

This means that, in most games, you could get a maximum of +4 per relationship level. +1 for each character completing a bond with the other character, and then +1 for each character saving the other's life. You could extend this depending on the length of your campaign and depth of roleplaying, but this seems simple enough to be implemented early level.

Friendship Level Perks
♥ 1- You can now aid your friend. On any d20 roll, NOT inluding saves and attacks, you can roll as well. If you succeed your roll, add +2 to their roll. This can be encouragement, holding out your hand so they can jump up, teaching them how to do it, etc.

♥ 2- You can now aid your friend for saves and attacks.

♥ 3- Once per day, you may take an attack for your friend. You have to be in position (in front of or next to) your friend to take the attack for them. This is done before the attack is rolled, which means your AC is used when calculating if it hits.

♥ 4- Mind affecting spells now don't let you act against your friend. If you'd be charmed into hurting your friend, you don't. If you'd be enraged into hurting your friend, you don't. If both of you are enraged you might wrestle or break each other's equipment but not actually hurt the other person. Other spells, like Sleep, may or may not be resisted depending on how much your friends needs you to not be under the effect of the spell for their own well being.
Posted by Cacklecharm at 6:00 AM