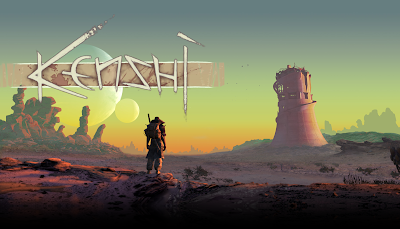 So before I start writing this; I want to make it clear- this is my headcanon lore for a game that is absolutely 100% wrong. See, when I first started playing Kenshi a few years ago, I played it from time to time. But the world of Kenshi is really weird and unique, and for whatever reason I began to make up a "story" all on my own. But here's the thing- the game already has lore. It already has a background story that is quite interesting on its own involving a cycle of falling empires, a race of machines, and so on. For this blogpost, we won't be discussing any of it- so you can consider this spoiler free.

In the end, my headcanon explanation for the world and what was going on in it was totally shot to hell because of it, so I ended up not writing this blogpost. But then I realized it doesn't really matter- as its just a headcanon. Maybe this concept is something that a out-of-touch noble of the United Cities thought up in their spare time, where as a faction like the Tech Hunters would be more "in the know" and know that none of this is true. Still, maybe you can enjoy this wrong headcanon.

Kenshi Origins
The world of Kenshi is set on a moon. It orbits a great gas giant. The moon has a decent amount of water and a breathable atmosphere. While the most ignorant of souls in the world of Kenshi might think this planet is all there is, or the center of the universe, most with at least some scientific education know otherwise.

Think about it- there are advanced machines still running hundreds of years after whatever destroyed the world (and let's face it- it is destroyed, there are ruins everywhere. Ancient blades and armor are better then our new stuff- they wouldn't live and scrounge among ruins like we do). Technology has clearly regressed. Most people would know that Kenshi's planet is not the origin of intelligent life on it. It is clear that life has come from somewhere else- travelling on spaceships.

Dotted around Kenshi's planet are massive superstructures. Some of them are so big entire towns can be fit inside. Huge piles of scrap metal that look part of an even larger structure. What possible weapon or machine could these be a part of? At the size and shape they are; the only real explanation is that they are part of great world-vessels, huge starships meant to ferry many living things or people across vast distances in space. Therefore, people didn't originate here, they came here through space. But something went wrong; the spaceships they lived on in orbit around the moon started to fail. They had to land on the planet- the spider bots and bases may have been their first outposts the original people lived in before their technology and knowledge was slowly lost. 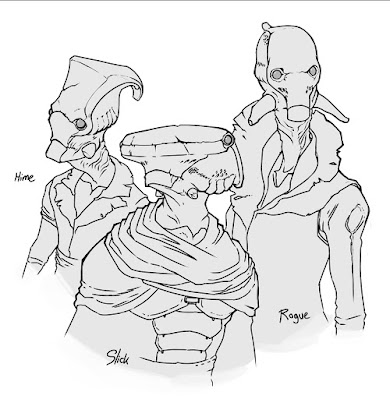 Kenshi Races
The world of Kenshi has a few different intelligent races. There are four- Humans, Shek, Hive, and Skeletons (Robots). While the skeletons are artificial and could not have come about naturally, the other races/species leave more up to questions.

Firstly; Humans. Humans don't really look like anything else on the Kenshi planet. There are two subraces of humans; Greenlanders, and Scorchlanders. They are both humans, but have different skin colors and slightly different stat and skill growths. This indicates that these people did not originate from the Kenshi homeworld, and are instead the original race of interstellar travelers. The two races appeared later- Scorchlanders created themselves using advanced genetic engineering after the planet-ships crashed to better survive the wastes.

Second; Shek. Shek look like humans (and even call themselves humans in some dialogue events, but it is unclear if this is an oversight), but are covered in bone plates and are very physically strong. In fact, their appearance is similar to many of the animals on Kenshi's world. This would indicate that they are more naturally from the world? Wrong.

The animals of Kenshi come in different categories. Three species in particular match real-world animals we know of; goats, bulls, and dogs. These animals look like Earthling animals to an extant, but with bone plates similar to those the Shek have. This shows that these animals are also artificial; genetically modified and created to live on the planet with the Shek. It could be the Shek were created as a primitive culture, to either be studied by the advanced humans living in orbit, or to help the early colonization of the planet, as there is no better way to destroy harmful megafauna then to create early hominids and let them run amok for a few thousand years. But the Shek, being primitive and aggressive, were never meant to last. They were supposed to be wiped out or uplifted after a certain point, to ready the planet for human colonization.

Next are the Hive. The Hive don't look like any other races and don't have sex (well technically they have Queens- but we won't talk about that here). Instead, they don't look like any other race. The Hive look like some of the native life of Kenshi; baring superficial resemblance to the beak-things, leviathans, etc. They have a similar coloring and skin coatings- the Hive are natives to the planet. Created or uplifted by human involvement; their role was to become differing castes of servants and planet-colonizers. They have castes innate to their biology, and their reproduction via the Queens is clearly augmented by technology.

Finally; the Skeletons. The Skeletons are robots, obviously. Not much needs to be said there. They were created by humans as their various workers or servants. With the ability to gain self awareness, they became their own race since the secrets to building them was lost along with the high tech factories. Any of them you see are basically antiques. 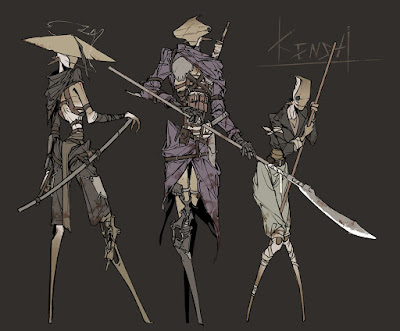 For starters, people in Kenshi can become extremely strong, supernaturally so. Enough to punch metal and take multiple powerful sword blows without serious bodily injury or death. While it is possible to do exercises to become tougher in real life, it's not an infinite scale up- there are limits to how tough flesh and bone can be. In Kenshi, people clearly exceed that level. The same goes for physical strength and speed- with people able to sprint for extended periods while carrying super humanly heavy loads. Finally; limbs can be chopped off and removed. In the real world, people can survive this, so it isn't a huge stretch. With the advanced technology of Kenshi left around in old relics, people can use robotic limbs to replace them. That's sensible. But what isn't so sensible is how quickly people recover from limb loss- both in terms of shock and how quickly they can adapt to having a new limb. The moment they put a new robotic limb on, they can instantly use it as well as their own limbs, with some small negatives to dexterity or highly precise movements like picking locks. How could this be the case?

The answers are simple- and are done in two. First is genetic engineering, and the second is oxygen.

In the real world, humans have evolved to a certain state that we are because of evolution. The truth is humans could be stronger, smarter, taller, etc. But the reason why we aren't is because of the cost- mostly in the form of calories, heat exchange, and childhood development. The square-cube law is a huge bitch anyway. In real evolution, humans had to evolve the correct balance of being useless after being born for a number of years with a payoff, and they had to balance our physical and mental abilities with the amount of food we could realistically get. But once humans gain modern technology, these restrictions become less important. For this reason, I believe the humans (and all races based on them) are highly genetically modified to allow for things like ultra-dense muscle formation, rapid healing, and supernatural levels of cardiovascular conditioning and ability.

But the question is, why do characters start so weak in that case? Simple- humans aren't stupid. Humans know that there is a chance they or their descendants could be trapped on barren planets or stuck in spaceships for many years, and these changes require heavy amounts of calories and proteins to power. As such, you don't start with this level of strength because your body isn't efficient enough. For a highly advanced society that manipulates the genome like clay, there's no reason you can't have both- efficient bodies for emergency situations and survival/regression into a pre-advanced society, and advanced, powerful bodies once agriculture or mechanized society comes around. (The only problem is that characters don't require more food as they get higher stats, which is just a part of the gameplay. Maybe the body-structures are also genetically engineered to be really efficient once set up?)

Finally; there is Oxygen. The Kenshi moon has a lot of oxygen. You can see this because all the metal outside is rusted to hell and there are few plants in most places. This oxygen is terrible for plant life, but great for mammals and other species that breathe oxygen. The fact some creatures can reach such huge sizes and people have such great cardio is directly caused by oxygen. The only places where plant life grows are in swamps, valleys, and other places where carbon dioxide can be found in great quantities- perhaps leaking from the ground from ancient garbage dumps buried from the previous civilization.