This is all about +1 magic weapons. These being the “magic weapons” that are just better then regular weapons. People often complain about these, and think they're boring compared to other artifact weapons, but I think +1 and +2 magic weapons with few properties are fine as a method to make the world feel more incremental and to add more progression. But I thought to give them some fluff reason for existing, and some fun concepts to make them fit into a campaign better. 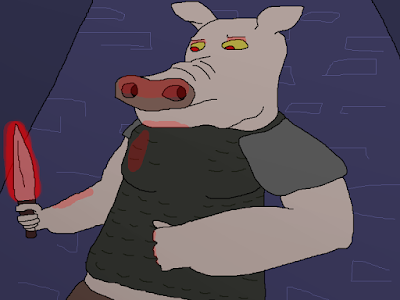 Glowsteel is magical. It's made from pale glowing, light colored silvery metal ore combined with high quality iron. The glowing ore only comes from meteorites or from deep, deep within the Earth. It is not normally colorful in this natural form, but through forging it does.

Metal is a conductor. The metal tools of a surgeon conduct life force, the metal pans of a kitchen conduct flavor and heat to make food, the metal of a laboratory move the elemental forces or help contain them, as with a lightning rod. But metal weapons conduct energy too- animus. The animus is the spirit of life force that all living and nonliving things have, the spiritual aura or in the case of undead, a black hole of aura instead. This is why magicians can sense if beings have been nearby, they are tasting their aura, which rubs off on everything. As they are pounded into shape, the blades seek to rend and destroy the most hated race or type of being of the created, infusing it with its purpose. It aligns to that aura, conscious or not, and becomes able to detect it.

As such, when a blade smith creates a magic sword with Glowsteel and wishes to slay orcs, or has been an enemy of orc kind for their life, then the weapon will glow blue in the presence of orcs. When Orcs use glowsteel to forge weapons for their own champions, it glows red in the presence of human scum instead. The “early warning” of these weapons applies to creatures within 100' feet, glowing dimly in the dark and getting stronger the closer they are. If one of the aforementioned selected creatures touches the blade, that is when it glows the hardest, even hissing with aura as it spills off the blade like hot blood. This also applies to magic armor or shields, but weapons tend to be favored as they can be sheathed to hide this light if necessary.

Random Glowsteel Color Table- 1d12
[1] Glows blue nearby Orcs.
[2] Glows red nearby Humans & Elves.
[3] Glows yellow nearby officers of the law. Favorite of thieves and assassins.
[4] Glows green nearby dogs. Used by elves and forest spirits to avoid hunters.
[5] Glows purple nearby creatures from another world. Used near dimensional breaches.
[6] Glows orange nearby dragons and dragon-spawn. Range double due to powerful dragon aura.
[7] Glows black or absorbs light nearby dwarves. Used by dark elves, which can “see” it.
[8] Glows white nearby demons. Classic.
[9] Glows brown nearby horses. Used to help find and catch horses on the great road.
[10] Glows gray nearby artificial constructs.
[11] Glows a waxy pale beige nearby dungeon traps. Very valuable.
[12] Glows dark green with aquamarine and orange polka dots- glows to warn of nearby chimeras.
Posted by Cacklecharm at 6:00 AM