These are magic whip-style weapons. Possibly only usable by the Pastamancers; known best for their constant and endless feuds with the Saucerors.

All of these list their values as "Base" AC. The rights kinds of magical sauce can easily enhance these modifiers. Spicy red sauces increase damage, where as cool white sauces give to-hit bonuses. Up to you how you want to do it. 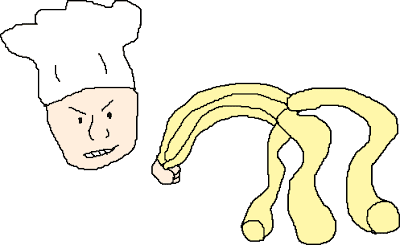 The classic. Well balanced, average noodles who are blessed with consistent damage. Not the fanciest or trickiest type of noodle, but is good at what it does.

Small, thin noodles. The "whip" acts more as a cat-o-nine with many small strands attacking at once. Due to their small size however they like to slip in the gaps of enemy armor and strike from many directions at once. The noodles themselves are weak and deal minor damage.

This is a flat type of noodle used by the more defensively minded Pastamancer. Its flat surface means it is useful for deflecting enemy attacks and parrying blades and blunt weaponry. It's damage is less consistent then other types of noodle whips, but it makes up for it in defensive strength.

These spiral shaped pasta noodles usually aren't drawn out this long, but for a noodle whip they can be crafted in the magical kitchen this way. The Fusilli are like a drill; attacking targets with powerful blows. They aren't consistent at all, but have a chance to deal big damage! Fusilli noodle-whips also lock you in place, since you're essentially holding on to the end of a giant spinning rocket drill, making dodging enemy attacks after you make an attack difficult. The best time to use this is if you have the advantage of surprise or allies to protect you from retaliation strikes.