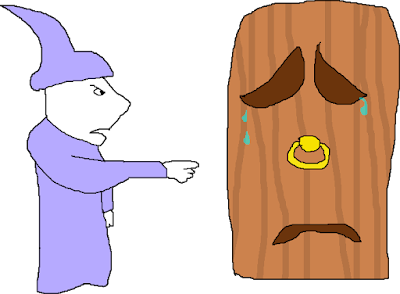 [1] Fold Portal
This spell allows the magic user to magically "fold" a portal down in size or shape. For example, a door could be folded vertically, making a small door that only a kobold or small creature can pass comfortable- anything bigger has to crawl through. You could fold a door by the top corner to the opposite side and create a strangely angled door. This spell is permanent unless the "portal" is unlocked with a golden key.

[2] Hold Tortal
This spell fills a target's hands with a large, grumpy turtle-creature called a Tortal. It's heavy and bulky enough that you need both hands to hold it. If you let it slip, it will scratch you with its claws in the fear of being dropped, and if dropped against the ground will bite your heels as if blaming you- dealing 1d2 damage. This spell magically fills the target's hands, but only works on beings with both hands that are free- so you can't cast this with something already in their hands like weapons, so it works best as a surprise attack.

The Tortal itself is just an animal, but seems strangely amicable and may even become a pet of someone who takes care of it.

[3] Scold Portal
This spell lets the magic user "speak" to any portal, like a window, door, or arch. Whatever they say is heard through a lens of criticism and scolding- the effect of this spell is improved by the caster's Charisma modifier.

The portal will begin to sniffle, sob, or straight up cry based on how good your verbal bashing is. Focusing on things like its appearance, lack of ability to allow or deny passage, or anything else will enhance this effect.

If the portal is sniffling and/or sobbing, it will make a loud sniffling noise whenever somebody passes through it. It will also warp as it opens and closes as though a sobbing face; this may allow bigger things then normal to pass through, or block them if it's a constant motion.

If the portal is crying; it will drench anything that walks through it with its tears; a waterfall pouring down through it.

[4] Hold Porkal
This spell works on any sort of pig-like creature, like an orc. When cast, it will block them in place, as though the spell Hold Person or Hold Monster is cast on them, except the creature will be unable to say anything except "PORKAL PORKAL!"- a common sound of a very delicious creature unable to fight back. Attract a wondering monster if they're loud enough; they'll draw a creature that likes to eat easy pigs as their prey.