These are giant evil snakes or anything, they're just snakes. All snakes here have 1 hit point (die on any hit) and AC 14 unless otherwise stated. Because of fast they can strike, they don't make attack rolls, instead just make a save vs poison. Upon failure, you suffer their venom effect. If you aren't surprised by them, you can try to attack and kill them before they bite. Snakes bite once and then run away, unless they predate on people. 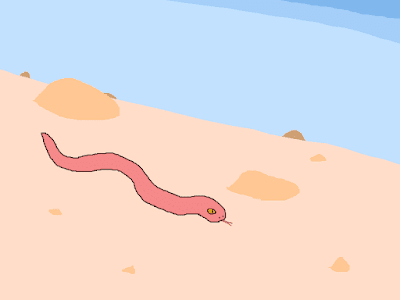 [1] Thunder Asp
This small snake has a dark gray body with yellow highlight scales; giving it the impression of a lightning bolt. It can open its mouth in a threat display, which shows off its bright yellow fangs that spark with electricity when exposed to the static electricity in the air. Its spit acts as a conductor, so whenever it opens its mouth a sudden shock is generated.

Venom Effect- An electrical shock. You take 1d6+1 lightning damage. You also twitch and take 1d3 damage to your Dexterity from fried nerves.

[2] Skin Snake
It has no scales (set AC to 10) and looks like a little dismembered penis slithering around. Kind of gross, but cute in a weird way. The skin snake doesn't come out during the day or night, since it's too hot or cold, and its very sensitive, preferring to run across smooth stones then irritating sand and gravel. The skin snake will still bite when threatened like other snakes- before going back to its burrow lined with various bits of nesting material to keep it comfortable.

Venom Effect- The skin snake's venom makes the victim feel uncomfortable and itchy. Rashes break out over your skin very easily. You have to make a saving throw every exploration turn you are wearing armor- you cannot wear any armor for the next exploration turn if you fail the saving throw. This effect lasts for about two days.

[3] Cookie Snake
This snake is named after a specific type of cookie; the snickerdoodle. (or maybe the cookie is named after the snake, nobody knows). It has about the color and texture you'd expect, though the snake itself tastes terrible even as far as snakemeat goes.

Venom Effect- Once bitten, unusual yellow discharge will start to leak from your eyes. You get -2 to attack rolls, and disadvantage on ranged attacks or spell-aiming rolls. This discharge is sometimes collected as a minor magical reagent for certain magic user spells, but is only useful fresh (leading to keeping cookie snakes). The discharge will continue to come out for an hour, or six turns, before clearing up.

[4] Frazetta Viper
This snake is a small dull brown. Despite its camouflaged color, it tends to sun bathe on the top of stones in the sun, giving it a golden tan.

Venom Effect- Anyone bit by this snake has their body's muscular system hijacked. Over the next three days, they gain an intense amount of muscle mass while stealing vital elements from their organs and blood- they gain +1d2 Strength per day, losing an equal amount of Constitution at the same rate. This venom technically does no damage, but can be very deadly simply because some people's bodies essentially starve themselves to death to build huge, unnecessary muscle mass. At the end of the three days the person experiences massive fatigue, pass out, and loses all Strength gains over their one hour bout of unconsciousness. Their Constitution takes time to come back (one point per day).

Intense amounts of bloodletting will prevent a day's worth of Strength gain/Con loss, but deals 1d3 damage from the blood loss instead.

[5] Serpent-of-the-Stones
This snake is quite large, treat it as a 1 HD creature. It has a black and gray body color with a long, flat head. The Serpent of the Stones is a creatures said to be distantly related to dragons; due to its habit of phasing into stones and sleeping in them for many years, only to spring out again when a careless mason or miner splits the rock. The main power of this snake is its extremely magically potent venom that allows living things (but nothing else) to pass through and into whatever its venom has touched. It can use these on rocks to slither inside, but flesh can also yield. These snakes can do this to eat your liver, which they do to any large bodied, warm blooded animal.

Venom Effect- When bitten, you get two saves. The first is to avoid the bite. The second is to clutch and claw at your skin to prevent the snake from eating your liver. If you fail both saves, you die. If you fail one save, the snake will be knocked loose. Additionally, any other living thing you touch for the next hour has a 1 in 6 chance to phase partially into you; no AC roll required to hit with natural weapons like claws and teeth and so on.

[6] Hoop Snake
This snake is very aggressive and will bite its tail to roll towards its prey, especially on the downhill slopes of mountains. You save at -2 unless you see the snake coming, which is difficult as you will be looking at it from the dead on straight angle unless another party member is watching out. The snake is very agile and fast; it can zigzag through a field of caltrops for example.

Venom Effect- Save or die poison. People who die from this have their muscles clench and contort- their faces are always found in a look of extreme surprise. You can also save yourself by stepping behind a tree, in which case the snake will struck the tree causing it to wilt, blacken, and die instead.

[7] Diary Moccasin
An unusual viper with a yellowish scale color, flecked by black spots. The spots on its back are random and unique for each snake; many local cultures use them as a form of divination. Their venom has a mental effect associated with it- forgetfulness, flights of fantasy, and obliviousness. Those who are bitten want to write down their experiences and ideas, leading to a sort of absent mindedness and foolishness that weakens them to magic.

Venom Effect- Once bitten, the victim loses 1d3 points of Wisdom per day. You cannot drop below half your original Wisdom, rounding up, from the effects of this poison. The victim also seeks to write things down and will scratch things into wood or their own skin if unable to write in a book or on tablets. Those who are illiterate will draw pictograms instead. The victim of the bite must spend at least one turn per hour scrawling things down.

Anyone who reads something they've written, at the time of this venom or not, gains an inside knowledge of the bite victim which makes them vulnerable to magic from that person, as though reading their true name or essence on the page. You can totally burn and destroy everything you wrote down if you didn't lose any of it; but during the venom you'll have a spasm if anyone tries to take your crazed writings away from you. The effects of this venom last about a week.

[8] Magnetic Biter
This snake looks a silvery color with blue highlights, especially around the tip of its tail and its head. It has a constant magnetic field around its body; consider it as having +2 AC at least against heavy weapons, which try to veer away from it as though magnetically opposed.

Venom Effect- Anyone bitten by this snakes experiences magnetic "pulses" that rip through their body, deals 1d4 damage every exploration turn you are wearing or holding metal objects. If you are wearing no metal items, you still take 1 damage from the iron in your blood beings forced out through your skin in tiny, impossible to see metal flakes. You get a save every hour to end the effect.