Battle at the Basho - Sumo Ruleset

I've been watching Sumo recently. God knows why. But this sport? This is a good sport.

Before we begin, let's give a glossary of terms.

Sumo is the name of the sport.
Rikishi is the name for the wrestlers.
Basho is short for "tournament".

Rikishi
To create a Rikishi, you must assign and/or roll your stats. Every Rikishi has four stats.

Every stat must have at least 1 point in it, and you can only put a max of 4 in a stat to start. You have a total of 9 points to spend.

Protip: You could also totally port this into any kind of semi-generic wrestling and/or brawling system. Just change "Height" to something like "Speed" and "Bulk" to something like "Toughness". You'll also have to change up the moves to help it make sense.

Bout Rules
In each bout, the Rikishi will face one opponent. They must either force the opponent out of the dohyō (wrestling ring) OR have any part of the opponent's body hit the ground except the bottom of their feet. Both Rikishi will begin in a squatting position, and when both of their hands touch the ground, they will run into each other to attempt to force the other out. Sumo bouts are very explosive and can be over in seconds, or go on for minutes of prolonged wrestling based on the strength, endurance, and longevity of the Rikishi.

For the purposes of game abstraction, we'll split the dohyō into three abstract zones. Center, sides, edge. Leaving or getting pushed out of the "edge" zone that doesn't move to "sides" means a loss, as you've been pushed out.

Each "zone" is occupied by one wrestler at a time, except the center. This means if one rikishi is on the "sides", then the other one isn't on the sides, and is either on the edge (getting pushed out) or in the center (and pushing their opponent out). This means both Rikishi will be either in the center, one center one sides, one sides one edge.

Each Bout begins with a clash, where both wrestlers spring into action. To determine this, add your Strength + Bulk score and roll a d6. If one Rikishi gets a result twice as high or better then the other, then their opponent is pushed back to the Sides from the impact. Otherwise, both are against each other in the center.

Action Rules
Every round, each Rikishi can perform an action. Actions are thought to occur more or less simultaneously, so if you push the enemy Rikishi and they push you, you can imagine you're pushing each other.

Pushing is the basic action. Combine your Strength + Height against the enemy's Bulk, both sides roll a d6. If you succeed, your enemy is pushed back one zone. If you fail, nothing happens.

Striking or palm thrusts are allowed in the rules of Sumo- punches aren't, but a mean slap or palm strike can feel almost as bad as a fist. Whenever you strike, add your Strength + Height against the enemies Height + Bulk; both sides roll a d6. If you succeed, the enemy is pushed back a zone and gets a -1 to their next roll. If you fail, you give the enemy an opening, and they get +1 on their next roll.

Sidestep is a high speed technique, and the reason why smaller wrestlers can sometimes win out against bigger ones. Roll a d6 + your Height and Bulk versus the Enemy's Height minus your Technique. If the enemy has a lower number, they move into your zone. This only works if the enemy tried to push you last round.

Grabs are done when one Rikishi grabs the mawashi (the diaper thing they wear) of the other in an attempt to flip them or gain more control over the opponent. If your bulk is twice that of your opponent, getting a good grip will be hard and they get-1 to grabs against you. There is no roll to perform a grab, but it takes one round where an opponent can use their full force to push you or strike to keep you at bay.

Once you grab the opposing Rikishi, you must then choose an action. You can either lift the enemy wrestler, or attempt to flip them. If an opponent grabs you, then whoever is taller gets to go first.

Lifting requires a roll of Strength + Height against the opponents Bulk + Technique with both sides rolling a d6. If you succeed, you "walk" them back a zone and they are forced to roll again next round to escape.

Flips require a roll of Technique vs Technique + Height, with both sides rolling a d6. If you succeed this roll, the enemy Rikishi is pulled off their feet and slammed or rolled onto the ground, which means you have won the match. 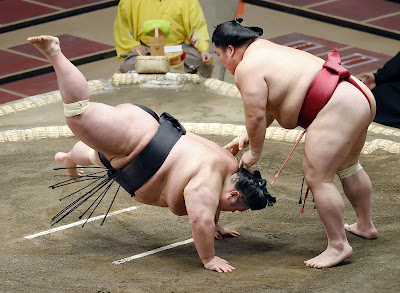 Is this ruleset shit? Probably. I didn't playtest it. I was half asleep marathoning a sumo tournament on twitch during covid when I wrote it. Forgive me. 仕方がない