Have you played Luigi's Mansion 3? It's quite good. Maybe a little "soft" like most modern Nintendo works, but it has a lot of unique idea, charm, high production values and polish, and some amazing creativity and variety. My favorite thing about the game is how much "unique" stuff is in it. Like unique floors and rooms, unique props, and most of all- unique treasure troves.

I don't think any other game out there give a similar feeling of being able to explore pretty much everywhere and find some random hidden treasure trove. But I'm not just making this blogpost to talk about this video game, I actually wanted to draw attention to how good some of these treasure troves are in the context of a dungeon crawling environment.

Now in this context, I'm using the term "treasure trove" to refer to small, optional bits of 'treasure' hidden away in props or side areas. Since trove might sound a bit more like a LARGE amount of treasure like a treasure hoard, you could also replace this with treasure caches or small little stashes of treasure.

To some this may sound obvious; but the idea of filling a dungeon with lots of small, miss-able treasures every which way is a great way to ensure that your players will find at least some of the treasure. In games I've run, the "large" treasure troves (if they are significantly hidden in any way), tend to not be found, where as the more small ones based on simpler interactions are. Therefore, you need to make sure there is ENOUGH treasure around that the party can actually get some XP and level up if they don't find every nook and cranny, and cramming treasure everywhere in small amounts makes sense for this. While "balance" is a bit of a controversial word, I think balancing out a dungeon's play experience so that most groups will get a moderately useful amount out of it without having to stumble upon one secret wall or door is very important and an important element of good design.

Also, after the first time it happens, you bet the players will be investigating nearly everything. To those who already have long running groups playing OSR games, this will be expected, but if you grab some random players who have never played tabletop, or come from a more structured gaming background such as 4e or 5e D&D, they will be less likely to randomly pull a mounted boar head's tusk down to reveal a hidden cache of silver coins that spew out if its mouth. As such, Luigi's Mansion 3 acts as excellent fodder for ideas to steal for your own dungeons. Here's 30 ideas for where to hide treasures, stolen or sourced from Luigi's Mansion 3. 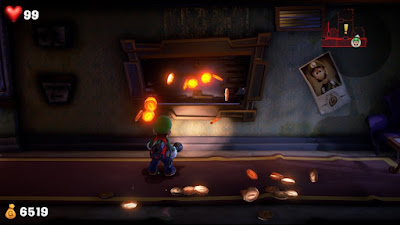 30 Treasure Troves & How they are Hidden / How to Open Them
[1] Stagnant, rank bathtub filled w/ black water. Drain to reveal the coins at the bottom.
[2] Small artificial palm trees on a diorama of a pirate bay have paper money for leaves.
[3] Statue of a naked lady. Nipples are actually coins.
[4] Rack for clothes in the ancient barracks. The hanger-bar is hollow, filled with rolls of money.
[5] The kitchen. Underneath the oven is a big conductive copper plate- unintentional treasure!
[6] False brick in wall, hiding treasure. Eyes of evil overlord portrait look right at it.
[7] Book has paper money stuffed in the pages. Book has to have a fitting name, like "Payday".
[8] Maypole. If you spin it around enough, gold nuggets rain from the archimedes screw inside!
[9] Mounted lion's head with a braided mane. Pull it, mouth opens, silver plate inside.
[10] Mural on a wall shows chest; chest bricked into wall. Stolen from Goblin Punch.
[11] Ancient Temple. Face rotating bull statues away from each other; treasure comes up.
[12] Ancient catacomb. Four color-coded tombs. Place color-coded skulls for secret room.
[13] Obvious trap doors for a pit trap puzzle. One doesn't open. Within is treasure-chest.
[14] Poem on a wall, missing word like "gold" or "wealth". Trace word with finger to open it.
[15] Room with multiple wind-fans. If you get them all spinning at once; treasure is revealed.
[16] Fountains on edge of room, transfer to dry central bowl, delicate silver boats float up.
[18] Archery range w/ arrows stuck in target. Hit bullseye to flip it over; coins glued on base.
[19] Four sitting chairs; pressure plates under cushions. Hold them down to reveal treasure chest.
[20] Piano in a room. Certain combination of keys = top opens to reveal golden strings inside.
[21] Chicken coop. Pressure plate under the empty nest; place eggs to reveal white jade egg.
[22] Standard nobleman's portrait with golden rays of sunshine behind him. Really gold leaf.
[23] Decorative cannons on display. Deep in the barrel are gold balls. Tip or "fire" to loose.
[24] Elevator. Ride on top of the elevator, not in, to go to a secret jewel room.
[25] Banners or curtains covering a niche filled with gold.
[26] Flaming torches on a hall. Some aren't lit. The classic- light them for a secret room.
[27] Room with sandlot. Have to dig deep; treasure chest inside.
[28] Armory with spears. Rusty, shitty spear is actually a lever connected to a trapdoor.
[29] Ancient throne room. You have to be really fat like the old king. Throne sinks into floor, pulling down the pillars around the throne with it vertically to reveal niches stuffed with ransom.
[30] Pendulum blade swings back and forth over walkway. Stand on blade itself with daring leap, it goes through the wall with a wide enough crack for you. There is a secret room there.