I made up 8 Stands 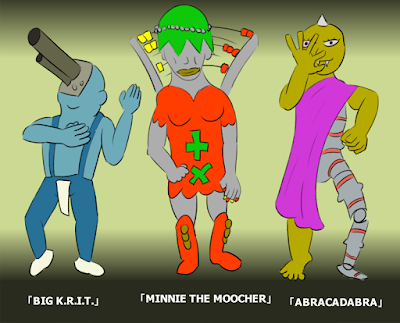 [1] 「BIG K.R.I.T.」
Type: Medium Range, Average Stats
Ability: This stand launches objects with telekinetic force. The amount of force is the same no matter the size or air resistance of the object, so small objects like stones or coins are launched as hard as bullets, where as large objects like cars are shoved only a few meters. The object cannot be a living thing, but severed limbs could work.

However, once an object is launched, it will then rapidly begin to heat up over the course of one minute. The object will give off an amount of heat in proportion to its size. Small objects will get so hot that picking them up will burn your hand, where as large objects will get so hot they'll start to melt metal and cook the air around them. After this minute, the object will begin to cool down at a normal speed. Objects still warmed from this ability cannot be fired again with the telekinetic blast. The heat generated from this ability also will not damage the object itself, but anything around it can be affected.

[2] 「MURDER AT MIDNIGHT」
Type: Remote Control Stand
Ability: This stand appears as a weazel ball made of flesh, with a highly stylized wolf connected to it. This stand can be used on anyone if the user makes them bleed- it can be from a cut, punch, medical procedure, etc. The 'ball' will sink into the person and become dormant. At the exact moment a digital clock would end in a 0 (as in, every 10 minutes), the Stand will activate and begin to explode the person from the inside out with large, bite-shaped holes over their body once every minute.

If you are affected by this stand, it is possible to transfer it to someone else by drawing their blood before the clock hits the zero. If the time is up, the Stand will not stop attacked until whoever it is within is dead, but if they manage to survive for long enough then it will be transferred to the next person whose blood was drawn by whoever the stand was in last. It is also possible to transfer the Stand into animals, blood bag storage room in the hospital, etc.

[3]「MINNIE THE MOOCHER」
Type: Close Range Power Type
Ability: Whenever this Stand punches someone with a solid, good hit- one bead on the right (yellow) side of its abacus is slid over. Once all the beads on the left side have slipped over, one bead on the left (red) will slide over and all the right beads reset.

For every left side (red) bead that is active, the Stand can perform one totally unerring hit. This hit ignores physical terrain, range limit, and other Stand abilities. Once this hit is done, the bead slides back and is considered used up. As the power of this Stand grows, the number of beads on the right side of the abacus decrease, thus making it easier to use the more powerful left side beads. Also, as a surprise this Stand could potentially have right-side beads get slid over by "defeating" another Stand user in a game or sport preemptively before a battle.

If the Stand hits anyone else while it has active beads, ALL of its beads are reset, both on right and left. This Stand is only good with one on one battles.

[4]「HELL N BACK」
Type: Swarm Type, Excellent Defense
Ability: This Stand appears as a swarm of flower blossoms with no stems. Whenever this Stand is used, the user can create exactly one flower on an object. Because this is a swarm type stand, destroying just one flower head deals essentially no damage to the Stand user. Every few seconds, the flower buds will start to multiply- first creating a bud, and then 'blooming' when its active. Destroying a flower will prevent it from multiplying, but Flowers can be placed in sneaky places like inside a pant leg or handbag, or even inside your mouth and can multiply to go totally out of control.

[5]「LIONROCK」
Type: Closer Range Power Type, Poor Stats
Ability: This Stand looks liked a golden, idealized version of a man with a wrestling championship belt. It has a hole where its face should be, which from behind the user almost looks likes its framing their face. This Stand's ability is to just make everything the user does, says, or attempts to do look incredibly intimidating and powerful.

Against this Stand and its user, you'll feel as though you're hopelessly outmatched, unless thought is used to see that the effects of his actions are mediocre at best. The Stand is actually really weak and shitty, it just tricks people into giving up by seeming unbeatable.

[6] 「NATIONAL ANTHEM」
Type: Remote Control Stand
Ability: This stand is a small instrument or music player. The Stand Master simply has to play or begin the tune around the intended target. From then on, the target will start to hear the Stand from any other device that can play music, such as phones, televisions, music players, intercoms, street musicians, and so on.

As they hear the music, their body will begin to transform into an animal. The animal is always a stereotype of their body and personality- a big hairy guy might start to turn into a bear, a slim swimmer will turn into an otter, flirty librarian will turn into a big fancy bird, and so on. The transformation takes a long time, but goes faster the longer they are within range of the music. The person turning into an animal will retain their full human mind and ability until the transformation is complete, in which case they are fully an animal in both mind and body.

[7]「ABRACADABRA」
Type: Medium Range, High Defense
Ability: This Stand has a long purple cloak which is used for its ability. If this cloak covers any part of a living thing, that part of the living organism will turn into a robotic version of it. The person or animal still retains full control of that body part, but it now has the capabilities of a machine and the disadvantages of a machine at the same time.

For example, a person with their legs turned into a machine's legs mean they are as hard as metal, and they won't get tired from running around, but they would 'short out' from getting shocked or their metal parts would rust very fast if submerged in water, and so on. Any stand that heals living things won't work on robots, but anything that can repair or modify machines could work on the robot body parts. The user of this Stand can use it to turn themselves into a machine for strength, or enemies to try and disable them.

[8]「BLIND GUARDIAN」
Type: Long Range
Ability: This stand appears like a flat, chrome eagle. This is a long range stand, and the user can see anything reflected in its body as long as they are outside at the same time (they look at the reflection on its body with a supernatural sense of sight). The eagle itself cannot see, and requires its user to guide it. As it flies, it can turn sideways to become nearly invisible to anyone on the ground, but if it turns sideways towards its user they will not be able to see anything through it.

This stands ability forces anyone the user can see to "trip". The person can trip in any direction, even straight up. The ability deals very little damage on its own, but can obviously be used to 'trip' people into dangerous objects or into other people to start fights etc. People who are agile can recover from these trips, but the more injured you are the more powerful these trips become. Eventually the "trips" become more like being flung several feet in any direction the Stand user choose- even including straight up to slam them against the ground or kill them from a far height.