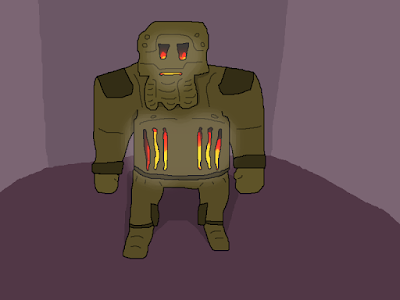 The Furnace Golem looks like an ancient bearded dwarf. It is made of metal and is both a furnace and a creature. Within the furnace golem is a fire which is its power source as well as its primary weapon- the furnace must be occasionally be fed anything that can be consumed by flames to continue to power this golem. If it's flame is every put out, it will cease to be animated, and can only be lit again by a special, magical flame. As a golem, it has no conscious mind and no will of its own; it will fight to the death every time, and is immune to any spells that target living things or mind-controlling spells.

The Furnace Golem may strike with a steel fist dealing 1d6+1 damage, or may use weapons and will deal the damage of the weapons at +1. Its arms are very inflexible and it cannot use two handed weapons, and prefer just to smash people with its fists anyway unless ordered otherwise.

Every round it may also release a gout of deadly flaming breath released from its riveted mouth- this deals 2d8 damage to anyone in about a spear's range of its mouth in a cone. However, each time it uses this ability, it loses 1d6 hit points from the loss of its inner flame. In order to preserve its flame, as well as to provide a ranged weapon, the golem may also fire a beam of focused heat and light from its eyes; channeled from its inner fire. This deals 1d4 damage and can travel as far as an arrow from a shortbow- any longer distance and the light fades and its becomes ineffective.

Fulgrite Golems appear as long, twisting roughly humanoid figures made from fulgrite. Can only be created with several powerful bolts of lightning trapped away or called by the artificer. They are still charged with this electrical energy after being made. More fragile then the other types of Golementals, the Fulgrite golems move with much greater speed if needed, but pause in place between frantic bursts of speed. It's body is very brittle, and as such it doesn't twist to move but instead prefers to rotate its body fully or hop in unusual motions that make it difficult to predict.

The Fulgrite Golems attack by moving past people; their bodies shedding a skin of electrified sand, magnetic waves, and bits of glass fired in all directions. Because of this nature of attack, they cleave through groups of people who approach them, dealing damage to all with each attack. The electrical energy of the fulgrite golem deals 1d6 damage against anyone who strikes them with a melee weapon made of anything conductive- but the Fulgrite golem takes identical damage as you use up its charge.

Finally; these golems can call lightning. By standing still, they can move the local weather one stage. This ability obviously only works outdoors. Clear skies go to cloudy, cloudy goes to dark, dark goes to stormy. The lightning from this storm won't hit the fulgrite golems (as it hit them already) but will hit anyone who raises up a metal weapon or might strike a tree; once every other round.

The riptide golems have a central "body" that looks like a sunken barrel or hollow log. When it is activate, its true form is revealed. The golem "walks" and attacks with long loops of cord tied around smooth river stones. The ropes are carefully enchanted so they don't slip off. The golems are known for the distinct sound they make as the river stones are pulled into its central body, made wet with water, and rub against it on the way out, creating a clacking noise. These cords and stones must remain wet; its central body can store a small amount of water for a few minutes outside of a stream or pool, but it must return soon or else it will deactivate.

Every round, it can whip out its loops to strike enemies with the barrage of stones. It can also wrap these cords around people to try and drag them under the water to drown them, but doing so gives up one of its "loop" attacks. Piercing damage done to its main body will cause its water to leak out faster- it can only be out of water for a maximum number of rounds equal to its current HP divided by 6, dropping the remainder. Or in other words, the minimum number of dice its current HP worth of hit points could be rolled with d6s.

The stone golem is carved from a block of pure stone, and engraved with magical words that cause it to become alive. It is the slowest of all types of Golementals and can only act once every other turn. It can only move about as fast as a man can walk, but never tires, does not bleed, and will never stop perusing its target once it has been told to. The golem is slow and stupid, cannot jump or fly, and as such could be trapped in a room or a pit with no method of escape.

Since the stone golem is made of stone; it cannot be damaged by bladed weapons unless they are significantly magical; +2 or better for swords or arrows to harm it. Normal blunt weapons will take damage as though you were attacking a block of stone, because that's exactly what you are doing.