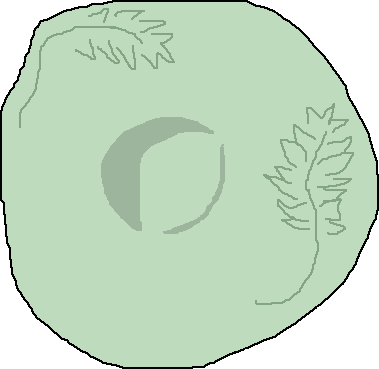 The Bitterscreen appears as a gray-green, sickly metallic shield with a collection of fading flowers drawn on the front. It is magically enchanted and grants the wearer a significant magical aura of protection of +2. If shields in your game already grant +2 AC, then bump this up accordingly.

The Bitterscreen has two primary abilities. The first is that anything in the "view" of the Screen will not heal correctly. For people this usually means hiding the screen with at least a tarp or turning it away in camp, else you will restore no hitpoints over a good night's rest and all medical procedures will heal a die size smaller (so d6 to d4 and so on). The Bitterscreen seems to just make healing a problem, as though it projects an aura of decay.

The second ability of the Bitterscreen is the Bitter Ray. The holder of the shield can charge up a blast of energy which appears as a dull glowing light. This energy is then released as a cone in front of the holder extending to a maximum of 40 feet. This blast deals 4d6 damage evenly distributed to everyone within the cone, friend or foe.

The name of this artifact has vexed scholars for years, as despite the similarity in names, this item has no relation whatsoever to the Bitterhound.