How long have grapples been a meme for in D&D or DIY stuff? I feel like at this point, they've been such a point of contention that people have created a whole bunch of house rules and simplifications for them. Even 5e has pretty simple rules for grapples.

But can we go simpler? By simpler in this case, I don't just mean "roll attack or roll under strength", I mean something that's got a little meat to it. So instead; Dirt Simple Grappling. 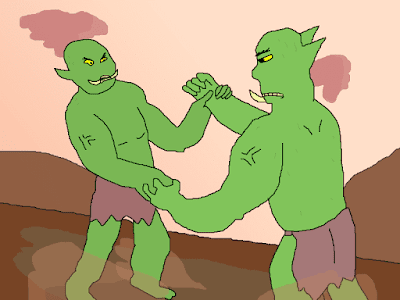 Grappling Rules
Grappling goes in two stages, going from a Grab to a Hold. You must have at least one hand free to utilize a grab. You can still use the other hand. You can only upgrade a Grab to a Hold if you have both hands free, or using small enough weapons (daggers, claws, etc.) that you can still use an arm effectively. You can make attacks with your free hand, but must use your action for a round grabbing somebody unless you're a badass Fighter or something. You can also instantly put somebody in a Hold IF you perform a grapple from stealth.

Note: I use this for my surprise rolls. I would allow a player to add any initiative bonuses they have from stats/class/race/magic items or whatever to add to this grapple, since its implied to be a sort of agility thing, but you can't get a bonus to grapples if it's a weapon, since it only works for attacks with that weapon.

In a Grab: The Monster cannot move away from the grabber and they cannot attack the grappler with a ranged or long reach weapon like a spear or whip. The Grappled target CAN attack the grappler with a shorter weapon, spell, natural weapon, etc. The grappled target can move towards or around the grappler, just not away from them. This includes the ability to charge right into them in an attempt to bowl them over if they are significantly larger or wearing heavy armor.

To move from a Grab to a Hold, you can simply use your action on a round to hold the creature. You move it into a position you can wrap your arms around it, pinning it down. The grabbed creature cannot attack the grabber anymore once in a hold.

In a Hold: Creatures that are in a hold are put in a condition where they (pick one);

If a creature is of a significant size advantage OR has more arms then the defender, then they can make a grab turn instantly to a hold. The first roll determines if the monster can escape from the hold before it is made. For example, a giant wrapping his hand around you is instantly a full hold, meaning you can't fight as your body is constricted in its grasp. The same applies to giant snakes, many-limb tentacle monsters, and so on. 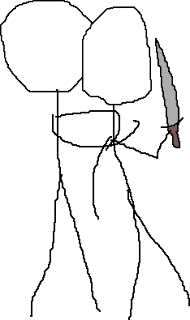 Takedowns
Once someone is in a Hold, you can attempt to take them down. This can be a nonleathal choke until they pass out, or a lethal neck-snap type of move.

Add your class damage bonus with attacks with your Strength modifier. If you're a Monk/due with powerful unarmed attacks, you can add the maximum possible size of your unarmed attack die to this too if you don't think it's too broken. If this number is equal to or greater then the enemy's remaining HP, you can take them down. Otherwise, you deal your normal unarmed combat damage as you slowly twist their ligaments too far or constrict their airway and the like.

The purpose of this ruleset is to make grappling a simple ruleset that reduces the power of a grapple while making it something that doesn't waste your turn automatically- and provides some tactical use. Also, a lot of ruling over rules still applies. You can't grapple anything too big or strong, or anything without a physical body, of course, and will have to handle it on a case by case basis.