The world of Kenshi is a dark and violent place. It is a wild world with ancient machines, mutant monsters, bandits and cannibals, but there are those who practice the Way of the Swordsman. There is an intolerant religious regime preaching human superiority, and a corrupt republic of cities where being poor is illegal, and punished with enslavement; but even here there are groups seeking a fresh start.

If you haven't played this game, then a lot of this won't make sense to you. This is my homebrew race. I had the idea to mod this into the game myself, but my ideas (as usual) are too beyond the scope of my meager abilities. If you ever decide to play Kenshi in tabletop (and you should), then you can add these guys in to be your plucky underdogs. 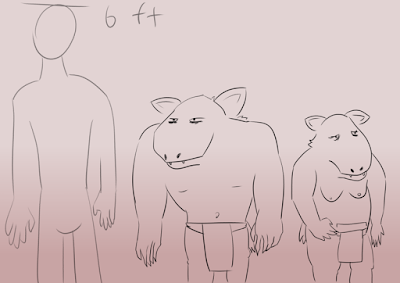 Kenshi - Biters
This unusual species of small humanoids have an unusually shaped head. They are not seemingly related to humans or hive, and are their own separate species. They stand between 3 and 4 feet in height, and are thickly built. Their heads and fur is reminiscent of a landbat, a dangerous creature, so some scholars believe they are a related species. They are also totally carnivorous, but are small and can go for a long time without food. This means they can eat raw meat as well as foul raw meat similar to Hivers.

Like the other races in Kenshi, Biters have multiple subspecies. Unlike other races though, this is a gendered subspecies, and is more a result of sexual dimorphism. The male Biters grow to become Rustbacks, who are larger and have a red color along their spine. The females grow to become Sandfoot, who have a lighter, more camouflaged coloration. Redbacks have a stronger upper body which allows them to use melee weapons better, but both breeds of Biters are too small to use heavy weapons. (They do not have a primary weapon slot in their inventory). Because of their small size, Sandfeet are among the physically weakest of all the playable character choices, but are skilled with lockpicking for their small hands and gain medical skill at an advanced rate.

Out of all the intelligent races of the world, Biters are probably the dumbest. They are smarter then cannibals however, which means they can at the very least speak and commence trading with other factions. As with all non-humans, they are openly attacked and enslaved by members of the Holy Nations if they trespass on their lands. Biters believe in magic and are known to be easily fooled, but are good survivalists and well suited to many of the more hazardous places in Kenshi's world. Their bodies are well adapted to the desert; they have small, rough eyes which gives them poor eyesight for ranged weapons, but they are naturally immune to duststorms.

The Rustbacks are almost as strong as a standard human, which given their size and lack of ability to use large weapons (and legwear) means they are at a significant disadvantage in a fight without superior numbers. The Sandfoots are even more extreme, except for their stomach. This is because the females of their race have a pouch to raise young, which means their lower body is extremely well armored with loose skin, cartilage, and protective fat.
Skills
Culture & Factions
The Biters cannot support large communities and are not known for great organizational skills. They also are by far the youngest race in the world of Kenshi, possibly only a hundred years or less that they began to show signs of intelligence. Their culture is therefore very bare and simple. Their settlements are more like shared nesting locations, their people are organized around breeding and food. Bands of mostly male Rustbacks hunt for wild goats or garru and bring the meat back to their camps, where the Sandfoots protect the nest, care for offspring, and sometimes tell each other stories or trade with outsiders.

Biter camps are small, made up of several burrows. Their construction skills are limited in sophistication to perhaps a flap of fabric over a burrow to keep the dust out or a small door that can be closed with a heavy stone to keep bone dogs away from meat storage. They certainly do not have any strong walls, defensive turrets, or electricity. If you decide to trade with them you will see that they almost exclusively sell animal skins, teeth, and bones. Occasionally, one will dig up a shiny thing in the sand and sell it at a seemingly random price, which could be anything from a few bolts lost in a battle to an advanced robotic limb that they will let go for peanuts.
The Biters have few leaders or little social complexity- with the exception to healers. Biters believe in magic and they view healing as a form of magic. The leader of every Biter nest will always be a Sandfoot mendermother; a practiced healer who is viewed as a shaman. The Biters are known to be a good partner to trade with for medical supplies; they buy them at a high markup as they cannot make them themselves, but they have little currency with which to trade. It won't be long before the Trader's Guild catches wind of it and finds a way to exploit these primitive people.
The Biters do not control many lands and they are not well defended. The areas where dust bandits, hungry bandits, and wild animals patrol are the same places where they live. They are relatively peaceful and have no interest in attacking or robbing travelers. The exception are Shek. If a lone Shek or small group wander nearby a Biter den, the Rustbacks may mistake the Sheks for wild goats (their eyesight is bad and the bone plates make them look similar at distance), which could lead to some Shek warriors getting swarmed. Tales of these random attacks have begun to reach the Shek Kingdom's, and may cause a war between the races. Unfortunately for the Biters, it is likely this will end in their extermination.
Posted by Cacklecharm at 6:00 AM