The generic “you all start in a tavern” is a bit old hat. Some people skip this by just starting in the dungeon, or even in medias res if you know your group and you're actually good at DM'ing. But consider the following starting location: You all start as Carnies. Or traveling minstrels, whatever. 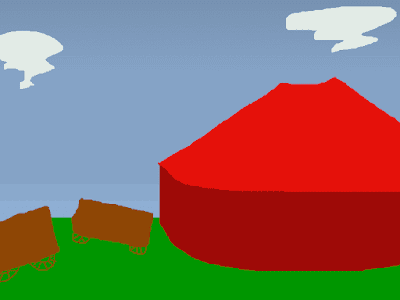 You are all carnival workers. You're all very poor. (Motivation for adventuring). And you travel around from place to place. (Letting you arrive in adventure locations and new modules; you just go where the carnival goes). All of you are also very skilled in specific things.

Look at your character's stats. Whatever stat is your highest stat, this is your normal “job”. Basing it on your class might be better, but most people pick their class based on their stats anyway.

Wisdom: Lion tamer, fortune teller, clowns. (Makes sense if you think about it.)

You need money. You aren't well liked, you lack social connections, and the only people you've got to watch your back are your friends. Combine this with a more rigid caste system or stratified society with little social mobility (like your standard middle ages fantasy world)- delving into dangerous tombs becomes one of the only ways for you to actually achieve something. If this be just for a bit of luxury, to help your carnival, or to try and escape this unfulfilling life.

Whenever you return from an adventure, you can take along a trophy that may act as a sideshow attraction. “Come one, come all, and see a REAL dragon skull!!!” You can even brag about being the one who killed it, though nobody will believe you. That's part of the fun.

[1] There's a kid who is really good at the dart game. Says he's practicing so he can take down the harpies at his uncle's farm.

[2] Some patrons at the sideshow are gawking at the fake mermaid skeleton. “Woah, that looks just like the thing down at Pirate's Cove!”

[3] One of your stilt walkers falls down in the middle of a performance. The bite in the wood does not look like any animal you've ever seen before.

[4] One of the tigers looks incredibly scared whenever its cage is exposed to the East.

[5] You patch up some holes for the big top when, in the middle of the night, a bunch of stirges rip through the patches and suck blood from a bunch of caged animals. They must have a nest a few hours from here. If you want to increase the stakes; the animals will die with continual feeding and you can't pack up the traveling show yet.

[7] Two clowns get into a fight at how to split a coin they got as a tip. When it is split directly down the middle; the two pieces magnetize back together and reform. This coin seems new, but the local mint that produced it has been abandoned for decades.

[8] The people in the carnival are starting to get sick from the water. The nearby stream has occasional streaks of black liquid and what appear to be bones floating down river.

[9] There is an orc, goblin, minotaur, or other demihuman/monster character who seeks refuge among the carnies. They say their group expelled them when they refused to serve a new dark master that has taken over- a dragon, lich, beholder, dark sorcerer, or some other large threat.

[10] The true heir to the throne accidentally reveals himself in an attraction. Maybe he smashes the strength test machine in a million pieces because the King's bloodline is super strong or whatever.