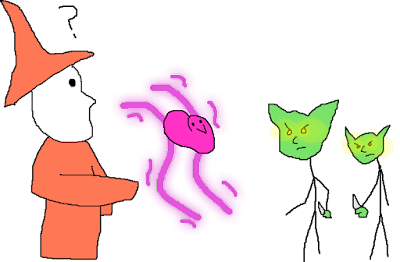 [1] Peep
Conjures forth a sugary mass. The mass is in the shape of small birds, and can be used as a ration for one person. Relying on this spell for a second day in a row causes stomach aches, dehydration, and poor health. Every day you use this for rations sequentially deal 1 damage to your Constitution score. If you want nourishing food from magic, turn to a Cleric.

If the caster of this spell is very high level or fails casting this spell somehow, consider the spell having a small chance to summon a 1st level Peep man.

[2] Meep
This spell allows the caster to emit a trembling little noise that causes animal attackers to hesitate. This only works if the caster is physically smaller then the animal and doesn't fight back. Powerful animals get a saving throw to ignore the effect, and intelligent animals aren't effected at all.

[3] Creep
Add +2 to your next stealth roll. If you don't use stealth rolls like that or want a more concrete effect, just make this spell mask one of the ways you can be found out in stealth.

[4] Cheap
This spell works on any nonmagic item or piece of equipment. It magically and invisibly transforms the item into a cheaper, shittier version of itself. Your armor has mismatching straps and is clearly made of several inferior alloys not melted together fully; leaving splotches all over it. Your weapon is dulled on one end and has nails in the shaft to prevent the wood from splintering, etc. The weapon or armor gets -1 to attack rolls or your AC, and will break on a roll of 1 with a weapon or armor/shield breaks on a roll of 20 made by an enemy attack against it.