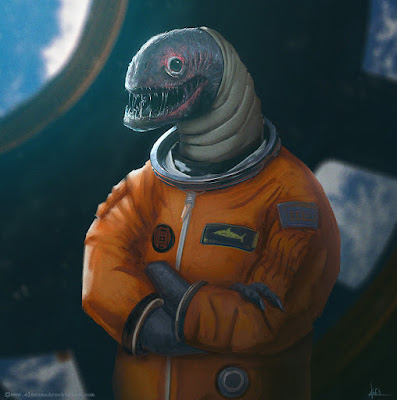 You're a big scary eel man. You're also exceptionally intelligent, dexterous, and all around nice guy. If you're playing in a more fantasy setting over sci-fi, maybe this guy is from another dimension, future timeline, or is dropped in from a cosmic spelljammer starship that crashed on your primitive planet.

You have a very low Charisma. This isn't just because you are ugly and scary looking, but because of several innate biological traits that can't be suppressed. You are totally carnivorous and have to eat your prey live- eating dead prey is similar to a human eating uncooked meat. Technically possible, but unpleasant and can get you very sick. You're also prone to several gross or weird social ticts and habits; such as saying "Please pass me the plasma wrench dear. Oh yes, thank you eheheheHEHEHE." and other fits of creepy behavior. Sorry.

You are, however, an Eel person. You can't breathe underwater but you can hold your breath for an hour. If this is because of your race or if it's because of your advanced Eelstronaut training that's up to you. You can also see in darkness, especially dark water, and can fit into anything that your head can fit into letting you slip through pipes and stuff. Useful on a space ship.

You're very good with advanced technology. You can repair high tech gadgets and gizmos a number of times equal to your level before they stop working or need replacement parts. As a general rule, something high tech without a support network will keep working until it is either damaged or used incorrectly, then it has a 1 in 6 chance of failing until it fails. Eelstronauts can repair these, but they have a 1 in 6 chance to fail each time they are used from damage. You can also move around in micro gravity, which helps when hit with a levitation trap in a fantasy world.

You can also add +1 to hit with blasters and energy swords at first level. Every three levels after, add a bonus +1.

You can do a bite attack at 1d6+1 as long as you don't have your spacesuit helmet on. You find this kind of thing very barbaric however, and will need to spend at least a turn after combat grooming and picking man-flesh out of your sharp, spiky, glass-like teeth.

At 4th level, you gain the ability to perform an electric shock. You can do this pretty much as often as you want for low voltages, but for a big, high voltage attack; once per day. These low voltage shocks can be done on anything you're touching and can restart generators, run electrical circuits, or hotwire a device. The high voltage shock hits anything you are touching or that is grappling you; deals 1d8+1 damage and shorts out killer robots and stuff and deactivates them for 3 turns.

At 10th level, you become an Eelstronomer and now work in mission control, once you return to civilization (as in, a society with space ships, not a medieval town.) You no longer have to get into the cockpit, now you perform mission control and school the new generation of astronauts. You become the unsung hero the Eel space program and can retire with a comfy pension.