Airships are flying ships. While they look similar to naval vessels, they fly with the aid of huge balloons instead of sails and fly on currents of astral vapors and weather instead of water. They coast along the tops of clouds as the great ocean of the sky.
Airships use the same mechanics as regular creatures. They have HD, AC, and a saving throw. 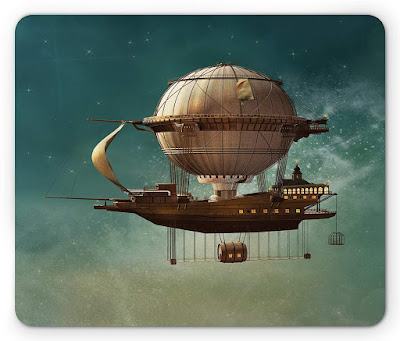 Airship Stats
Airships consider their HD as “hull dice” and they don't take damage from regular sized weapons or attacks. Normal axes and arrows can only deal small amounts of damage to the crew of a ship, or destroying some light sources, vanity items, windows and so on, but cannot deal significant damage to the hull without some serious power behind them. Only a high level Fighter with a huge two-handed great weapon could punch a hole in the ship large enough to deal damage, or a large AoE spell may be able to do a single dice worth of damage to a ship's hull. If the ship's hull is destroyed it will break apart, causing its cargo and crew to drop into the cloudy abyss or float upwards if they happen to be attached to something buoyant.

The Airship's AC is its maneuverability. Not necessarily their speed. Bigger ships are technically faster on the open ocean then smaller ships, but smaller ships are more agile and a harder target. The sails and balloons on the ship are what grant it its movement. Damaging the sails (grapeshot, fire, etc.) will lower a ship's AC over the course of a fight. If a ship loses its AC it will be unable to move or begin the descent and crash to earth. If this seems too harsh and hard to avoid, I'd say the cloud-ocean has a bit of bouncy too it, so it takes a decent amount of time to slip through the clouds and enter true freefall. Or maybe every ship has some internal balloons to help keep it floating along even if its main balloons are popped or what have you.

The Airship's saving throw is determined solely by its crew. The saving throw is used to avoid things like crashing into sky islands emerging rapidly from the fog, or dodging giant thunderbirds, or putting out fires/lightning clutchers on deck and so on. Destroying and demoralizing the crew is the method to reduce an enemy ship's saving throw. There is also a degree of rulings-over-rules that must be employed here- if the entire enemy crew is dead but the ship is still moving, its AC would drop to zero as no one can pilot it. If the crew is alive but there is no sail or ability to avoid, then its saving throw would still drop to zero regardless, unless if the save was for something that the crew can do without steering or controlling the ship and so on.

Airships don't really have levels but they can have classes or designations. You could use these as a sort of rock-paper-scissors thing for mass combat or to add some spice to it. The HD of an airship is determined by a combination of its size and the quality of its hull, support, and armor.

Airship Weapons
Realistically, any combat between two airships would be chaotic, with changes in elevation and timing, movement in 3d space, as well as many crew members on both sides attacking with both hand weapons like bows and crossbows or bombs at range to kill enemy crew as well as using ship mounted weapons to try and damage and destroy the enemy ship. As such, ship v ship combat might be a little tedious to run round by round. Instead, each ship could just employ one weapon or movement per phase to try and get an advantage over the other, or you could say that they are doing many things at once but this is the “one that made the difference”, or perhaps you have your own better method of doing airship combat. In that case, just do that.

Below is a random table of Airship weapons.

[1] Death Pikes – Basically iron spikes with a fluted top to make them always fall point down. Dropped from an airship onto another one from above, or to “bomb” villages and the like. Cuts or punctures a balloon, then falls into the ship and often kills crew. Effective, but you have to succeed an attack roll against the enemy ship's AC AND they get a saving throw to avoid.

[2] Fire Arrows – Very standard. Has no effect unless at least 5 people total are firing a volley at once. Any kind of arrow works; only one to-hit roll is used. Individual skill doesn't matter, this is all about mass to light the enemy hull or sails on fire. Fire is obviously useless when its raining and sails cannot be burned if made of fire retardant material or if the balloon is hidden inside the ship or metal-cased.

Deals no damage, but eventually lights hull on fire. The amount of volleys or how “hard” a save needs to be made to put out the fire can be based on the amount of arrows you actually launched. Deals 1d2 damage per Airship turn and has a chance to hit munitions hull or trap crewmen on the lower decks for extra damage until its put out. If it hits the sails it will destroy them in 3 rounds unless enemy can fly ship into a raincloud to put it out. Reduce the sail's AC by ½ for each round it burns.

Also if you like gunpowder stuff, bomb arrows are a total possibility. Make each arrow deal 1d2 damage to the enemy hull for each hit instead.

[3] Catapult – Normal siege weapon, primed for airship combat. Can load heavy stones (useful as ballasts for the ships anyway) or balls of pitch for fiery projectiles. Difficult to aim while both ships are moving and rocking around, but can deal decent damage.

[4] Ballista – Normal siege weapon, primed for airship combat. Can fire powerful bolts, though usually will be tied with rope to act as a method to anchor ships for boarding or to reduce manuverability.

Deals 1d4 damage to a ship's hull on direct hit. If embedded, rope or chain (can't be cut as easily) can be used to keep enemy ship from escaping or maneuvering away. Enemy ship gets -1 to its AC for each line embedded into its hull.

[5] Wind Blades – Blades placed along the side of the ship. Since ships can move in 3d space, they can perform not just ramming techniques but also rapid movements all around. Typically used to cut along the sails, balloon, or rigging holding them together- but a big ship can just straight up flatten and drop a smaller ship by landing on top of them.

Deals 1d4 damage to the ship's AC for a good pass, but it takes at least 2-3 turns to angle in for another one. If the ship is bigger and/or installed with a heavy ram, then it deals 1d6 damage on a fast impact.

Deals 1d3 damage to any ship feature, but requires close range. Maybe replaces cannons if you don't want that type of black powder stuff in your world, or maybe it's just cool and weird.

[7] Grenades – Thrown with a variety of implements, by hand and tossed/thrown, or launched with catapults. I like to imagine a catapult throwing like 100 small grenades all at once which explode in the air like a big flak cannon kind of thing to maximize chance to hit. You could imagine these as the little metal shrapnel bombs but I kind of like to imagine them as little black powder sacks instead. Perhaps if you wanted less black powder, maybe they're sacks of fine grain or sawdust or something instead.

Roll attack; for every point of difference between the AC and the attack roll, reduce the grenades final damage by 1 (since some of the grenades are missing). So on an attack roll of 14 but the enemy ship has 16 AC then you deal -2 less points of damage. If the attack is totally successful, then the full volley hits and it's a devastating attack. Roll 1d8 for an average volley, or 1d10 if you're using up your full stock of grenades at once.

Also; grenades could be made into flying “mines” instead by use of lighter then air little candle things by using sky lanterns with strings of firecrackers beneath them, making them neutral buoyancy. You can only use these on ships that are chasing you, but create a mine field that deals its damage if the enemy ship fails a saving throw.

[8] Rocket Arrows – Large boxes or batteries of arrows tied with rockets. After the fuse is lit, the arrows will fly out and deal damage as a large volley. Most ships opt for the square shape, but many go for an oval as the attacks are more concentrated on center mass.

Deals 1d3 damage PER BATTERY to the enemy ship's AC and crew, determined randomly per die. The ship gets a saving throw to avoid the weapons if they are spotted before they fire.

Deals 1d6 damage to enemy hull for a volley. If your ship is in a bigger class, increase the die size by one for having more cannons. After firing, your ship gets pushed backwards from the blast of the cannons while its flying around, -2 AC for the round after firing.

[10] Net Bomb – Devastating weapon. Essentially, it's a huge extra sail with hundreds of gunpowder bombs/grenades tied to it. Only useful on ships that are chasing you; you release the net, it parachutes open in flight and tangles around the enemy ship, then may explode because of fuses.

Deals 1d10 damage to the enemy hull and makes the ship have disadvantage on its saving throws since none of the crew can see through the giant net and may get tangled up in it. If the enemy ship succeeds a saving throw then it is avoided. Ships can only carry like 2-3 of these because of how big they are.