Some people think Genies or Jinn only come from lamps. This is incorrect. Some also believe that they intentionally twist wishes to punish mortals- this is also (usually) incorrect. What is true is that, before humans were created, the first Jinn were created from smokeless fire, which is true, but there were more kinds of Jinn created from the purest elements. One for each of the elements, and THESE are where the variety of Jinn came from. All types of Jinn were made before humans were, but all are capable of achieving salvation through Allah.

Each type of Jinn corresponds to an element. Jinn only very rarely intentionally misunderstand orders; they just aren't perfect. As with humans, they can make mistakes. Each Jinn's element determines what wishes they are best at.

All Jinn grant exactly 3 wishes. You can also use this as a random table if you want; 1d4. 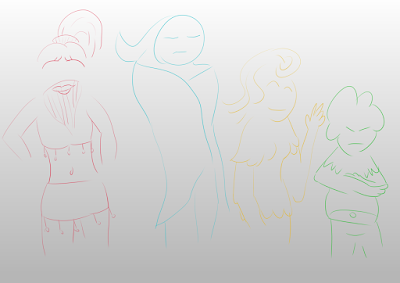 Created from the Smokeless Fire; these are the classic Jinn, these come from rubbing a lamp. Their lower bodies appear to be made of smoke, and they often have brightly colored skin. They tend to wear little to no clothing, and have strong personalities to match their element. They are prone to furious anger, but are also the only Jinn known to fall in love with humans.

As they are bombastic, these Jinn take great joy in performing spells relating to fire. Destroying things as much as making them shine like gold. They are also warriors and will gladly help you win your battles- either directly with a cataclysm of force. They are also the best Jinn to make you a King or grant you strength- physical or magical, as they can grow it like an ember to a fire.

Because of their one tract natures- it is hard to get these Jinn to do more complex or nuanced wishes. Wishing for wealth from one of these Jinn is likely to cause them to just steal it from a nearby authority. Raising the dead will result in a moving corpse, as they force life into it without knowing how to fully restore it to how it 'should' be. Many of the stories of twisted wishes comes from these Jinn, who are just trying their best.

Created from the endless source of water; these Jinn are more mystic then the others, and may appear in long robes or hidden behind a veil. Their personalities are cool like water, remaining as business-like as possible. Most believe themselves to be superior to humans, and find wishes made by them to be trifling, or a waste of time, though they must grant them all the same.

These Jinn are representative of water, and as such do best with wishes that mimic water. Changing or morphing one thing to another is their specialty- these Jinn are also called the “Jinn of the Secrets of Life” because of their skill in wishes involving living things. These Jinn are perfect to increase your lifespan- as they will give you both more years to live AND youth in return, as opposed to the other, more clumsy Jinn. They are also the best Jinn at granting or removing mutations or irregularities within living things; though something simple like “make me stronger” is more suited to Fire Jinn. However, water Jinn are not suited at all to returning the dead to life. To them, the dead is in a new form that cannot be changed back to a living form. If you ask one to bring a dead person back to life, they'll simply put their spirit in the newest available shell- which will almost always be a bird, rat, snake, or some other unfortunate creature!

However, the Jinn of the Endless Stream are not known for their wisdom in practical matters. While skilled with life, they are less skilled with the inanimate. Wishing for a precious object or jewels and they are likely to make them with structural weaknesses, or worse yet, making them out of ice. These Jinn also dislike the sensation of reducing anything- removing life from a foe or depleting their wealth would result in strange rebounds from these Jinn, who don't understand the concept of an ending.

[3] Jinn of the Motionless Wind

Created from the breeze that never moves from place to place; this was the wind that was loosed to become the breezes and storms in the world. These jinn are travelers, wise, and know many languages. They always introduce themselves in as many tongues as they can to their new master, and will respond with perfect form in the first their master recognizes (unnecessary; all Jinn can speak every language innately as they are magical creatures), but these Jinn make a show of it. Often they may be partially transparent, or look like ghosts.

These Jinn are tied to the wind and, by extension, magic and language itself. They are also excellent with any spells or learning of secrets, but only secrets known by someone; forgotten secrets are mostly the domain of Earth Jinn. These Jinn are also experts of name- they can give you any name you wish, and all will known you by that name. All Jinn will grant three wishes, but these Jinn will not only take you somewhere on a wish, but return you as one total wish, as the wind goes there and back again.

However, just as the wind is unfaithful, so too are these Jinn. They are unlikely to be able to produce magical effects or grant immortality in a meaningful way. They may grant you great wealth but it will only last a few years before the source of it dries up. These Jinn are noted to be good with secrets, but also bad with secrets. That's because any secret you learn with this Jinn can be gained, but will slip out eventually from that Jinn itself or otherwise. In other words wishing to learn a secret with this Jinn will succeed, but it will not be a secret for long. These Jinn are the masters of curses; both breaking them and causing them, but any curse made by them will be flippant or have a loophole you didn't see.

[4] Jinn of the Bottomless Hole

These Jinn are tied closely to the Earth and were created from the dirt at the bottom of the bottomless hole. These Jinn appear the most youthful, and may appear as children. They will also appear dirty, but in an appealing, innocent way like a smudge on the cheek. They wear for themselves dark brown and gray colors and are the Jinn that are the most humble. Most are brought out of their container by flipping them over, which they will tumble out onto the floor with a thump.

These Jinn have dominion with the Earth and everything buried in it. As such, they are also the Jinn most suited to returning the dead to life, as they retrieve their soul and body from beneath the ground. These Jinn can also create piles of treasure and precious gems; they know the hiding places of all riches and are quite good at them. They are stable with their wishes, their power can last for a long time, if not generations- many Kings and Queens may claim their legacy from the bombastic, proud Jinn of Fire, but it is really the humble Earth Jinn which keeps their royal line strong to this day.

However, the Earth Jinn are not well suited to transformations or the physical form. If you ask for a better body they may craft you one out of clay or carved from wood, trapping you in that lesser, though tougher form. They are also tied closely to the natural world and are the worst Jinn of all at summoning, controlling, or destroying magical creatures, though they are quite skilled with normal, down to earth animals. If you ask an Earth Jinn for a unicorn (usually so you can ride it or cut off its horn), it will just bring you a horse with a bit of wood strapped to its head instead. This isn't an attempt at falsehood- you asked for something stupid, a horse with a bit sticking out on its head, so here is what you wished for.