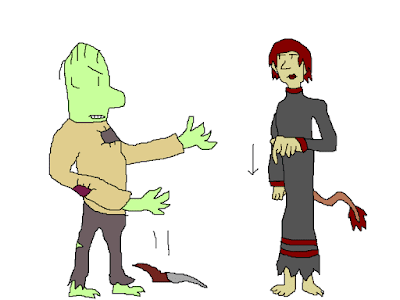 These zombie servants are created by necromancers using living slaves and expending a high level spell slot. Once turned, the zombie servant is bound by a magical command to never harm its master, and follow two commands from its master, or those its master designates as being allowed to give them orders. They can use any weapons and armor, and even cast spells if they learned how.

The zombie is as intelligent as it was while alive, and is totally devoted to the destruction of living people. It wants nothing more then to rip flesh, kill, and take revenge on its master by roundabout ways. Whenever it is given a third command, it overwrites the first command it had and it is now free to forget and ignore it. This means that after making two commands, the default "never harm your master" command is forgotten, and they will turn on their master.

This creature was inspired from a dream. After commanding the zombies to give me a rope and to lower me out of the elevated house they were stuck in, my two commands allowed them the freedom to trick innocent people into letting them out to eat the flesh of the living. I thought it might be an interesting zombie minion; intelligent creatures bound by only a few commands to hold them back.
Posted by Cacklecharm at 6:00 AM