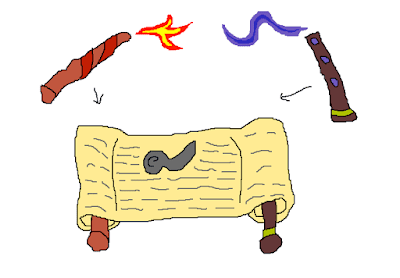 Recycling magic items sets an interesting problem. If you consider a more mystical or folklore-esque magic system, recycling magic items doesn't usually make too much sense. Items lose power if destroyed, or can't be destroyed to make new items. Things are enchanted just because, melting down a magic cup into a magic sword doesn't have any purpose, as its the cup that's magical. If the magic is based on inhabiting spirits, it also doesn't work very well since the spirits would usually be freed if the item was broken down or 'recycled'. But if the magic in the setting is more based on an energy or enchantment based model, then it works to argue that the magical energy or enchantments can be reused in new physical forms.

In order to do this, we're going to use the Ars Magica magic system. There are 10 Forms representing the most primal aspects of reality; Fire, Water, Earth, Air, Plants, Animals, Images, Minds, Bodies (of intelligent beings) and Prime (magic itself or metamagic element).

First, take the items being destroyed or used for recycling and consider the primary aspect of the enchantment; this is its vis charge that we can use to convert into an elemental point. For example, a +1 magic sword or an “unbreakable shield” are both made of metal, and are magically just “better” then other things of the same material. We could consider both of these as a Earth (Terram). If it's a fire sword, then it counts as Fire (Ignem).

The total number of enchantment points will influence how powerful and of what element the new enchanted item has and it's strength. If the total is a tie between elements; just pick whichever makes the most sense or try to combine them. Another idea is to make elements with mostly one element but some of another have the item theme'd after the smaller element. So if you create a magic shield with mostly Earth element but have some Air element in it; you could make the shield somewhat transparent, made of glass, or maybe release a puff of gas or a minor thunderclap when struck.

The physical form of the new object being created determines what “Technique” the “Form” of the object will take place using the Ars Magica as a baseline. The techniques in Ars Magica are Creo, Intellego, Muto, Perdo, and Rego- which we shall call Create, Perceive, Change, Destroy, and Control.

Using this ruleset, several magic metal items or earth crystals would grant an item a Terram charge, and if the item being made was a Shield, we could see a result of Rego + Terram. This means the item has the powers to control earth; which fits well with a sheild. Upon being created, a powerful mage might be able to “bend” the enchantment to a specific result under this umbrella. Rego + Terram could mean the shield helps to turn away metal objects, bashing into metal armor of enemies could damage them/make them not function as well, or the shield could be thrown as a weapon or even rid like a flying disc. All of which fits under our Technique + Form. The power of this enchantment would be equal to the charges used to make it; if it was +3 it could act as a +3 improvised flying weapon, or deflect 3 sword blows per combat, or be ridden as fast as a 3 legged horse, etc.

This is a hypothetical ruleset, maybe it helps you figure out what to do when recycling magic items if you can't figure out what it should do on your own.
Posted by Cacklecharm at 6:00 PM