Ever since making my last post about Dominions I've been thinking about porting a simplistic magic system to tabletop gaming. Truth be told I still think other forms of magic may be more suitable for dungeon crawling, but I like the Path system in this game and how while it is still focused there is still a lot of flexibility here too.

The numbers of course have to be changed from the game of Dominions. In the video game; having 1 in a Path is apprentice or novice, 2 is a proper mage and 3 is being a “master” at it. We need something more granular for tabletop. Plus simply put the spells are far too powerful and large in scale for what a solo adventurer, especially in a “balanced” party should have!

I've also considered making a sort of game and setting focused more on Dominions itself. I could easily see a game where the best Fighters still use magic to increase their power, because the magic paths are essentially the powers of the gods themselves. It might also be fun to combine this magic system into a game with high flying wuxia action- but this post is about the game mechanics themselves and a new magic system. 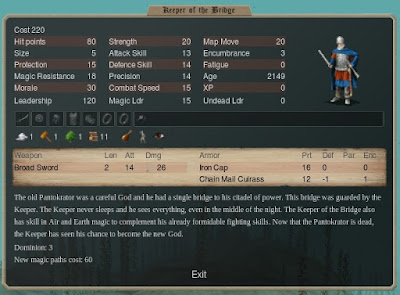 Dirt Simple Dominions (Magic)
There are 8 magic paths. There are the four elemental paths; Fire, Air, Water, and Earth- and the four Sorcerous paths; Astral, Death, Nature, and Blood.

Every level, your magic user may gain 1 point in any path of their choosing, including first level.

Casting Rules
Every time you cast a spell, roll your class HD for spell drain. Each level of a path you have ABOVE its minimum casting requirement reduce this drain by -1. For example if you have 4 Air and cast a 2 Air spell, you reduce your drain roll by -2.

Each point of spell drain makes you roll -1 whenever you roll a d20. Attack rolls, Saving Throws, as well as Stealth and Skill rolls are reduced due to fatigue. If you make one of these rolls and the total result is negative, you must save or become unconscious. Excessive spell drain can cause level drain; reducing make HP.

You may ignore the first few points of drain, equal to your TOTAL skill in all Paths + Wisdom modifier. Your negative to d20 modifiers do not start until after you have gone past this allotment.

You recover drain at 1 point per exploration turn.

There are 3 kinds of spells; Charms/Cantrips, which do not require a drain roll but have very weak effects, regular Spells, and Rituals.

Magic Gems
To cast magic ritual spells, you require magical reagents, often in the form of gems. Gems are usually found in sites of power in nature, or generated by magicians who draw them from the elements of nature. To summon any kind of permanent entity or craft magic items, gems are required. Some powerful battlefield spells, such as huge lightning storms or summoning elementals will always require at least one gem to cast.

You can also expend a gem when spellcasting to;
[1] Boost your power in a Path by +1 for one spell
[2] Reduce spell drain by -1d6
[3] Increase the range or area of effect by +50%
[4] Targets get -1 on their saving throws
[5] Cast a spell effect that you have not researched (spontaneous magic)
[6] Create an additional minor or long lasting effect to the spell
You can expend a maximum amount of gems per combat equal to your caster level.

All magic gems come in the form of bright, shining gems. The exception to this is Astral and Blood magic. Astral gems are called Pearls and function the same way, but Blood magic uses sacrificial virgins instead. You must deal 1d6 points of damage to a sacrificial virgin for each 'gem'.

This is how Dominions does it, but you can also have each piece of magic being more unique and special. Magical “gems” for the Path of Fire may actually be found in the form of embers, burnt offerings, charcoal, obsidian, etc. I'd imagine gems are more of a “compression” of magic similar to Tass from Ars Magica, but travelling magicians don't care and will gladly carry around bat ears and broken harp strings for the juice within. Blood magic is more specific, but I would extend what can be sacrificed to a few extra beings like rare pure white animals.

The Paths
Each magical Path has primary powers they control, as well as less common secondary powers.

Each spell of a magic Path in its “pure” form typically conjures, defends again, manipulates, grants resistance to or empowers its elements. Secondary elements are more common for its rituals and the special abilities of its summons.

Magic can also be done through cross-paths; which can combine the Paths into all new forms with flexible results. For example; Fire and Water could be combined in a spell for steam related effects, or to create searing acid. Combining Astral and another Path can allow for curses relating to the second Path used in the spell, and so on.

Variant Rules
Instead of choosing your paths per level, split up magic into two classes; The Elementalist/Wizard and the Sorcerer. These classes get 2 free spell drain soak per even level and increase their power level in all their paths +1 every odd level. At 3rd level they are 2 in each path they have, at 5th they are 3 in each path, etc. They can never learn new paths.

If you have “Dominion” over a land, you get a few free gems worth of points you can invoke at any time you wish by calling upon your arcane connection. This power from the lands comes from lands matching their Path similar to Magic the Gathering. ie; Deserts can be invoked for Fire gems, Swamps for Water, Starlit ponds for Arcane, Secret elvish glade for Nature, etc.

If you are casting spells in an area with a powerful enemy dominion or are under the effects of some kind of anti-magic curse; roll 1d6 on the table of what you can do by spending gems when spellcasting, and reverse the effect (such as -1d6 drain becoming +1d6 drain).

Magic Paths grant additional stats. If you're basing the game system off of Dominions itself, which has exploding dice and ~10 in all stats for basic units but that easily can go past 20 or 30, you get stat points for every 1-2 points in each Path. If you're basing it off D&D it might be better to make it 3 or even 4 points per Path to get a stat point bonus.

-Holy-
Very special form of magic only belonging to priests. They have less flexibility then the other paths but do not cause drain, instead paths are empowered by the Dominion and favor of your God which grants you the power freely. The exact effects of the bless and the nature of the banishing and smiting depends on the nature of the God.
Weak Holy: Bless sacred things, banish undead/demons
Medium Holy: Inspire followers of the God, Return damage back to Heathens
Strong Holy: Banish many undead/demons, Smite Heathens
Posted by Cacklecharm at 6:00 AM