You know what I like? Magical blasts. I mean those really generic sort of energy bolts that certain magic characters or monsters just fling at people as a form of "attack". They give me a feeling of a more holistic magic system then if every magical "thing" is like a specific spell or a set parameter of element + effect = damage of such and such level.

These are a lot like the blasts used by Warlocks as a cantrip for 5th edition D&D. While some people may not like cantrips for trivializing magic, I like the aesthetic of a blast because it essentially allows magical player characters to "feel" magic even at low levels when they don't get shit for spells or whatever, especially in OSR systems where they are reliant on doing things like throwing darts or attacking with a dagger after they use their one and only spell. Doesn't change the game much, just changes the aesthetics. This philosophy is why I created magic rods as a mainstay mechanic in my game- though nowadays I just have rods do "blast" damage, not having an elemental affinity at all.

But what about elements? I like this idea of "blasts" for creatures highly aligned with an element or elemental magic. High level Pyromancers should be able to just throw fire bolts at people without needing a spell slot- they're so magically attached to fire anyway. For instance, I like to say that elementals do "blasts" as a form of ranged damage. But elemental damage just in the form of elemental damage is kind of boring- so how do we spice this up? We'll use Overcharge effects. 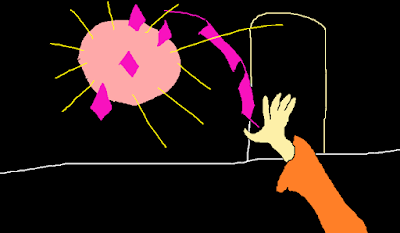 Overcharge
Whenever someone or something is hit by an elemental blast that deals at least 6 damage or more, they suffer something called an Overcharge effect. I wrote some up briefly for a very old blogpost, but these are since outdated. So let's talk about them.

Because of this method, small elemental blasts won't do the bonus. Like a d4 reflavored magic missile (irrelevant; I like d6 magic missiles, sue me), or a weak blast by a small elemental won't trigger this. But at least a d6 has a chance to hit an Overcharge effect. If you have a powerful d10 blast, then you'll have a 50% chance for the Overcharge effect to hit- quite a powerful weapon!

I also like the idea of each die used in a blast having a chance to trigger it, to distinguish powerful blasts that are really likely to do the effect once, or slightly weaker blasts that can trigger the effect multiple times. But this brings some confusion; what happens if a blast gets a flat bonus- does it not provide the blast benefit at all even if you roll a high number- because the die itself needs to roll 6 or better to count? If it does, then do you have to split up this bonus evenly among each dice? Might be a little too much added complexity, still, you could totally stack Overcharge effects if you want. Without further ado, here is the list of effects based on each element.

Elemental Overcharge Effects
Creatures suffer the Overcharge effect of a Blast if they take 6 or more Damage from the hit.