Anten is a murderer. He has killed three hundred and twelve people. He's done these killings over the last ninety eight years. He's also been executed for his crimes five times.

Anten is a seemingly normal human. He is moderately charming (+1 Charisma modifier) but average in every other way. Set all of his stats to 10. Anyone with a Wisdom modifier of +1 or greater can tell there is something "wrong" with him. Anten prefers to lure his victims away, and then kill them. Anten prefer victims smaller and weaker then himself; usually killing women, or children, though occasionally he will kill travelers or drunkards. Not included in his body count are the large number of stray animals, livestock, and pets he has also killed. Worst of all, none of Anten's abilities seem to revolve around his killing in any way. His apparent immortality, as well as skill with magic, have seemingly nothing to do with his murderous appetite. As far as everyone can tell, he just does it because he enjoys it. 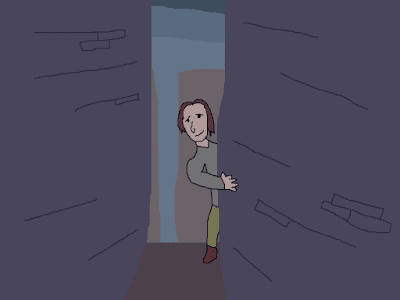 Anten the Immortal
Unlike many others beings with immortality, Anten's doesn't give him youth or any kind of special supernatural resistance to anything. He's a regular human who can be killed by anything a human could be killed by- the problem is he comes back.

Whenever Anten is killed, whoever killed him begins to experience delusions, antisocial behavior, and becomes more and more isolated and irritable. The strongest willed can last many years, but eventually, they go out and kill just like Anten did. They chop apart their victims into pieces, and eventually, they turn into Anten. This isn't like a sudden or instant physical transformation, its just something that happens. Eventually the person is gone and Anten is back, leaving behind no body or trace of the unfortunate host.

In an attempt to circumvent his ability to come back; the last time Anten was executed, he was bricked into a stone tomb with plenty of water but no food, so he would slowly starve to death as his punishment. He complained quite a bit about that, saying its "less fun this way", but it seemed to work for a while. Until one day, the mason who bricked Mason in smashed his wife's head in with a brick, and soon he was gone, and Anten returned.

It is believed that, perhaps, a being of incredible will and of moral good nature could slay Anten and if they were to die of old age he would be gone for good. Nobody knows what would happen if someone were to kill themselves or be killed by another after ending Anten; but it is believed that any violent death can return him back to life. This includes the PCs, of course.

Anten's Magic
Beyond his uncanny ability to return to life, Anten is also a magician. He only knows a handful of basic spells any Wizard may know, but also has invented a few of his own which aid him in spellcasting. As Anten is not known as an especially powerful magician, he can cast up to three spells a day, but casts every spell as though he was a caster-level lower then he is, meaning his spells are more easily countered and resisted. Secondly, all of his home made spells are designed poorly and weak; and require the supernatural energy of a lair to function.

For the purposes of Anten's spells, a lair is any place where the spell-caster has murdered someone in cold blood. Their body must be hacked apart into pieces and spread apart to the four corners of the room; just like how Anten does it. Each killing can add about a room or 20 feet worth of area to your "lair" space, which essentially grows more powerful the more kills are done there.

You can learn Anten's spells, if you were to somehow help him escape or evade the law. Some Wizards may also be able to read these spells out of Anten's skull after he is killed, but will likely be infected by his evil and be replaced like him at some point once corrupted by his taint.

Anten's Spells - Roll 1d4 for a random spell
[1] Anatomical Dummy - 1st level
This spell is a minor necromantic ability. If it wasn't for the fact that Anten is a poor magician, this could be used like a level 1 cantrip for any skilled necromancer.

This spell allows a corpse to be posed and stand on its own power, much like a dummy or mannequin. It's similar to an animate dead spell, but grants the body no intelligence or ability to move, just enough to support its own weight. The more full and complete the corpse is, the more stable it is on its feet. Corpses missing several body parts or with hollowed out body cavities can be shoved over with a stiff push, but fully corpses with only minor injuries take a powerful weapon hit to knock to the floor, ending the spell.

Anten sometimes decorates his lairs with several standing dummies, especially around the chair, bed, or table where he straps his victims, as though an audience for his activities.

[2] True Cut - 1st level
This spells makes a knife or short-bladed weapon act as a +1 magic weapon for a single cut or attack. This adds +1 to hit and damage like a normal magic weapon, and is not consumed until it hits a target. It cuts straight and true, leaving a very clean, surgical slice. Anten doesn't know or hasn't been able to learn more common spells that are similar to this one, but better.

Perhaps unintentionally, the energies infused into a blade or blade-point by this spell can be used to leave magic marks into whatever is cut, as long as its done in a single "cut" or long stroke. You could scratch your name in cursive on a wall, or your wizard's mark, for instance.

[3] Freeze Grasp - 1st level
This spell is intended to pin down and bind victims when more reliable restraints are not available. It requires a melee to-hit roll with an open palm. The caster must slam or push a target's body part into a solid object or surface. When successful, the spell creates a small frozen patch of ice, as though wetness was present and rapidly froze when the two bodies collided. So if you took someone's hand and slammed it into a wall with your own hand, the back of their hand would suddenly be frozen to the wall, as though glued on with ice.

By struggling free for one round, you can pull yourself away, leaving behind a small amount of clothing or skin on the surface you were stuck to. The ice will also melt after one exploration turn, unless in a place that's below freezing in temperature to being with. Also, any fire spells or warm water can be used on the ice to melt it away prematurely.

[4] Body-Burn - 2nd level
When cast, this spell creates a magical blood-red flame that grows fast and only consumes corpses. It will follow trails of flood or entrails like a fuse or line of gasoline. When it reaches a body part, it rapidly consumes it and explodes. Small body parts like hands or feed deal one damage, where as a full corpse would deal 1d4 damage to everyone adjacent. Large piles of corpses (or a room full of Anatomical Dummies) would likely deal Fireball levels of damage, consuming the corpses. However, nothing harmed by this spell will actually burn unless they were killed by it, just an explosion of heat and force.

This spell is Anten's most powerful creation, something he made to destroy large amounts of evidence if he needed to. Even after casting it, he gets winded and loses -2 to his AC for the rest of the combat encounter, as though drained of something fundamental to his being. More experienced spellcasters will not have this problem when casting the spell.