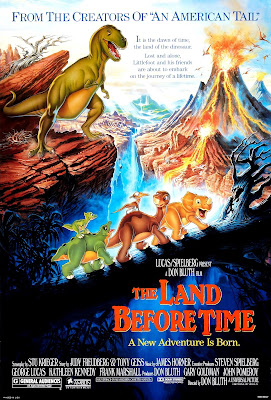 You're a dinosaur. Every character is a race-as-class. You could probably use normal stat generation for this and then pick whatever dinosaur fits your stats or maybe pick the dinosaur first and do an array or weighted roll or something to make a decent stat spread, whatever.

Here are the classes.

The largest and eldest of all the dinosaurs; longnecks are known for their wisdom and temperance. Their long necks provide them make them excellent scouts who can see for long distances, which along with their intelligence is the reason they so often lead dinosaur herds. They are huge and have long, whip-like tails used for self defense, but lack in offensive power.

Whenever a random encounter is rolled or you are trespassing through dangerous territory- the Longneck gets a X in 10 chance to see everything approaching from a distance far enough to go around or hide. X is determined by their number of HD.

Longnecks grow the biggest of all the people of the Great Valley. While they start off relatively small; they grow the largest over time. Instead of a HD cap of 6, your race has a HD cap of 9. Additionally, once you get to 7 HD or bigger you take 1 damage from any bite or claw that belongs to any species except for a Sharptooth.

Thickly built and well armed, these are the most fearsome of the Leafeaters. Their heads are protected by crests that grant armor and are named for the three horns that they use to battle Sharpteeth. Their horns and armored crests also grant them great protection, but attacks by smaller and more agile dinosaurs against the back of the neck or the body could ignore this protection.

Threehorns are known to be quite stern and protective of others. Threehorns can willingly take an attack meant for a teammate if they are next to them; once per round.

Spiketails are large fourfooters that grow spikes on their backs and on the end of their tails as they grow older. As hatchlings, they can only tackle or weakly bite (1d2 damage) anything as an attack, but once they reach 3 HD they develop spiked tails, which can be whipped as a 1d6 attack, and the spikes on their back fully develop to grant them bonus AC.

Possessing a cloak of skin that allows them to catch the air, Fliers can fly. As hatchlings (1 to 2 HD), they can only glide to varying lengths, or must catch upward thermals to gain altitude, but once they fully grow they can fly under their own power. Flying is exhausting and at least one turn of rest must be made for every X number of turns in flight, with X being their HD + Constitution modifier.

Swimmers are medium sized twoleggers who are adapt at water and on land. They have a large flat mouth and a long, hard crest on their head that grows with age. They can swim in the water better then anyone else and can hold their breath for their HD in turns. They are not especially fearsome in combat, lacking horns or claws to fight with, thus needing to use other tactics to avoid predators.

Bigmouths can blow air through their crest to create a loud trumpet sound- which can be frightening to other creatures. This ability is absent as a hatchling; Once the swimmer has 4 HD or more they can perform this move. The trumpet can scare away 1d6 + CHA modifier worth of Sharptooth in HD. They can only perform this move once a day.

Large fourleggers with hard shells of armor on their bodies, and large shell formations on the end of their tails that can be used to deal blunt damage and crush opponents. This weapon can do anything a blunt weapon can do that a sharp one can't- like crush rocks or break teeth, etc.

Additionally, add your Strength modifier to your weapon damage. 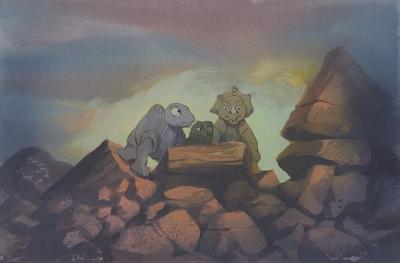 Progression
Everyone starts as a hatchling- a 1 HD character without all your abilities. Instead of gaining XP, you level up by staying alive for an adventure and having "time pass" between them, which can only happen after you accomplish your goal.

Whenever you are told, you will roll one HD of your class and add that to your Hit-Point total. As you level up, you will unlock new abilities based on your class.

All of your characters are assumed to be young dinosaurs with parents and relatives living in the Great Valley, the only safe place left for Leafeaters- with exception to story seed [1].

Items & Equipment
Nobody wears clothes and nobody really crafts anything. However, certain items can be used by twoleggers, who have inferior stats to fourleggers as a trade off. Fourleggers can carry items only in their mouths or on their backs, but twoleggers can use their upper arms for basic manipulation.

Sometimes, items are infused with sentimental value- a "snuggling stick" or "lucky treestar" if you will. This item can be expended to roll with advantage on a single roll- but the item will always be lost or destroyed in the process, or no longer relevant as the individual learns that they do not need it anymore.

Alignment
There are only two alignments, and they are based on diets. Leafeaters and Meateaters. These are racial alignments. Omnivores or those with alternative lifestyles; egg eaters, insectivores, or Sharpteeth that "eat veggies" are all suspect and not to be trusted.

Also, there are alignment languages. Sharpteeth speak "Sharptooth" which can only be spoken amongst each other, though they may be able to understand the words of Leafeaters.

Magic
There is no magic. If something is totally beyond your power in doing- a dinosaur is deeply sick or the watering hole has dried up, you can ask an Elder Longneck and they have an X in 20 chance to know some obscure knowledge that may help you. All "supernatural" elements are confided to rare plants that may have medicinal properties, unusual astrological events that make people act weird, or rare crystals that may have special effects.

Story Seeds - Roll 1d6 for a Random Story Seed
[1] You are living in the dying world at the end of the age of the dinosaurs. You must find a fabled "great valley" that is a home for Leafeaters.

[2] An unusual lone egg has ended up in the great valley- and once it hatches, it is revealed to be the egg of a Sharptooth hatchling!

[3] The ground cracks and large tar pits begin sprouting up in the great valley; several dinosaurs are at risk of getting stuck inside and dying, not to mention sucking away all the edible plants. You must search the caves underneath the great valley to find the source of it and see if there is a way to stop it.

[4] After a disagreement with the herd, one dinosaur has left the great valley all alone. If you don't bring them back, they will almost certainly die.

[5] An unusual comet is seen overhead. In the coming days, several unlucky injuries and bad things happen in the valley, including a swarm of Swarming Leaf Gobblers. The valley is believed to be cursed and something must be found to break the curse.

[6] Several packs of Sharpteeth have found The Great Valley; and it is under siege! No dinosaurs can get in or out safely, and the Sharpteeth outside have a 1 in 6 chance each month to find the way in until they are driven off. 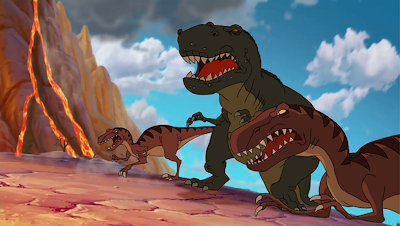