4 Spells of the Mindscape 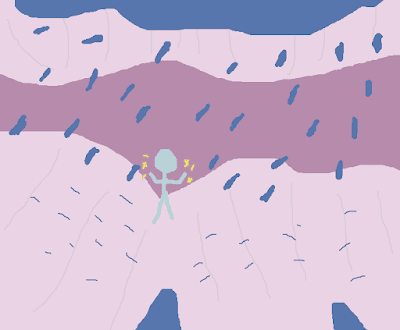 [1] Reject your Reality, Substitute my Own
This spell allows the spell caster to temporarily impose their own mental landscape over the immediate area. The area is equivalent to two to four dungeon rooms, or one general "point" in a pointcrawl.

What this does is creates a zone where the caster's own mind is imposed over the world; thus changing the inner landscape of the being you are within or exploring to be more predictable, and usually safer. This spell nullifies all effects ongoing from the mind- so gray fog of doubt that weakens your party or winds of indecision won't knock you around and stun party members in combat and so on- the area affected by this spell also weakens creatures from the main-mind you are within, since this zone is as though they are out of their home dimension. All mental-constructs lose -1 HD and related stats from being within this zone, but are not destroyed by it.

[2] Brain Freeze
The caster, and everything around them in about a Turn's distance of travel, freezes over within ice. This spell draws from the memories, feelings, and imagination of the brain-scape's owner to draw upon the essential form of ice and snow. Those who have lived their lives in a tropical climate or those spoiled to have never experienced a harsh winter will have significantly weaker freezes created in their brain, or perhaps none at all.

Firstly, this spell makes everything nearby that is part of the mindscape frozen. Enemies freeze in place, doors and chests are stuck fast, abstract manifestations of past traumas or ideas are frozen solid. As such, one can move around these without issue, but they become immune to damage, stuck within conceptual ice.

Additionally; this spell causes the person whose brain you are inside when you cast it to have actual brainfreeze. Causes a bit of pain and 1 point of nonlethal damage. Lasts for a turn, then thaws.

[4] Dragon's Dream
This spell is not cast in a mindscape, instead it is cast in the real world. Here, the magic user reels back and breathes "fire" in the form of flickering light from their mouth, which coats everything nearby in a burning sensation that deals no damage. Living things and the inanimate are effected by this spell, though its power is reduced by 50% against living things who make a saving throw vs breath.

The "dragon breath" comes out in a cone, and has a number of points equal to the caster's HD, similar to a dragon's breath weapon. Everything struck by the breath-attack become warped according to the caster's dream. People change according to the caster's perceptions and beliefs, the objects being touched by their memories and preferences. For each "point" or HD worth of change, one major element or part can be warped and manipulated by the caster's imagination into reality. Whenever the caster uses this spell, they are breathing out a portion of their soul's most imaginative, creative force- leading to a permanent reduction in Charisma by -1. If you are using vancian magic, instead they permanently lose the lowest spell slot they have each time they use this spell.

The immediate effects of the "dream" lasts for three exploration turns, but things or beings "singed" by the fire of the dream are forever changed by them. If the caster's dream turned you stunted and stupid, you will recover, but still lose -1 points of Strength and Intelligence permanently.