Roll d4 to get a random hireling, replacement PC, or rival NPC adventurer. 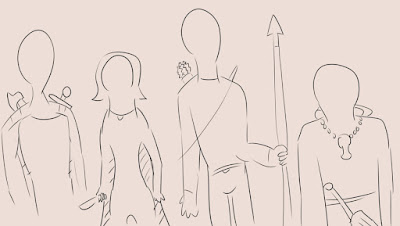 Young, honorable Fighting-Man belonging to the House of Tanner. He wears an enchanted red leather vest that grants protection equivalent to chainmail (+6 AC) without the normal stealth or encumbrance penalties. He is skilled with axes and swords, and usually carries one of each. For blunt attacks- he uses the butt of the axe as a club and due to his skill, this has no penalty for being an improvised attack due to his skill.

Ambrose is a young, slightly ambitious warrior who seeks to protect people from monsters and dark magic. He is somewhat ignorant of the world and wants to get more experience; though his fighting skills are those of someone clearly very talented; they outpace his experience. As with all members of the House of Tanner, he is instilled with the virtues of loyalty, honor, and humility. If and when recruited, add +1 loyalty.

Presida is an effective, non-nonsense type. She belongs to the House of Ventan. She is clearly a woman with at least a drop of noble blood in her veins- beyond being beautiful she is highly competent and skilled at what she does with seemingly little effort; but this is a false persona. She is actually very dedicated behind the scenes- building a gymnasium underneath her home filled with traps and tripewires to practice her skills.

Due to her highly disciplined lifestyle and training regime; Presida has +2 maximum Hit Points over whatever she rolled with her class HD. Additionally, she gets +1 to all Saving Throws.

She uses a magic weapon which is a small, extendable metal baton. This magic baton is called the Baton of Clanging and deals 1d4+1 damage on a hit. It has a special ability- if the tip of the baton is touched to a piece of metal, it can make the metal clang at any point along the metal, or make a delayed clang at the spot she touched it one exploration turn later. Using this allows for easy distraction of guards, monsters, and can be used to set up ambushes and alarms befitting her skills.

Tall, thin man skilled with a bow and spear. He is an excellent physical shape, as most members of House Scinarri are. His lips are burnt with vertical lines for betraying a secret of his house, but was allowed to stay after being greatly reduced in position. He is most common referred to by his nickname of "Silkfinger", perhaps because his actual name is blemished with his past.

Ulati is a hunter and has a deep respect for any culture involved in nature. He knows how to read magic and druidic runes carved on trees and rocks. He was always better with dogs then with people; Ulati gains +1 to reaction checks with animals. Finally, Ulati is a skilled knife fighter, though he prefers to fight with a spear in melee combat. The scars up and down his arms prove this. He has a set of two magic daggers, each with a +1 to hit and being immune to corrosion and rust.

Hotar is a simple, faithful man belonging to the House of Candis. He was born in the room of a temple of which holy, hallucinogenic vapors from the earth pour up causing his mother to hallucinate him being born from the vapors instead of her body, hence the name. Hotar was also negatively affected by these vapors from ingesting them as a newborn- he has a bit of a shake and is slow of mind, but strong in religious and spiritual matters.

He is also an amateur magician- relying on his spiritual intuition and vivid imagination to create spells instead of route magical formula. In your game, these are probably Cleric spells. If you don't have Clerics, then he's a white mage-type MU. Any given day you meet him, he has one of these spells randomly prepared along with the normal spells for his level and class.

Hotar's Holy Spells- Roll 1d4
[1] Singing Rain - 1st level
This spell magically charges rainfall, and can only be cast when it is raining or right before. This spell makes the sound of raindroplets hitting the ground sound a bit like music, chiming together to form a harmony of nature and sound. This spell effects a circle around the caster of about 100 ft.

This spell has no additional magical effects beyond this- but many creatures, especially evil monsters or demons, find the sound of such peaceful and pleasant music offensive to the ears and may be temporarily warded against. Devils who don't have a mission or anything just leave the area- or else they get a morale check to stay or enter the singing rainy area.

[2] Blossoming Light from my Necklace - 1st level
Requires a holy symbol worn around the neck or golden necklace worth at least 1000c to function. Hotar wears one. When this spell is cast, it creates yellow rings of light that get bigger and bigger in waves coming from the necklace in front of the caster in a wide cone. Anything this cone passes through is blasting by weak levels of holy magic. The effects of this spell get worse then the longer ones stays within these rings.

If an Undead creature stays within the rings for a full combat round, they are subjected to a Turn Undead roll as though turned by a first level Cleric. This seems weak, except this spell can bypass the normal HD number used by Turn Undead, as its cone effects everything in it. Intelligent undead may try to jump out of the cones before the round is over (using a move action, flying away, etc.) to avoid taking this check.

If an Unholy creature, such as a demon or dark cultist thing stays in the rings for a full combat round, then the next attack done against them by the spell caster gains advantage. They glow with a yellow aura, which also illuminates them very slightly in dark places.

If an Evil creature, like a bandit or orc stays within the rings for a full combat round, they get -1 to their next morale check, regardless of what causes it. This only functions if the majority of the squad were hit by the rings.

[3] Lightning Lash - 1st level
Creates a whip made of electrical energy in the caster's hand- the next time they whip with it and succeed on a To-Hit roll, it deals 1d3 lightning damage and ignites very flammable stuff, like people doused in oil or scarecrows stuffed with straw. The whip lasts for one successful attack, but if the attack fails the whip doesn't disappear unless it strikes something metal which scatters its energy.

Hotar made this spell as an elemental attack, but doesn't really like using it. Too violent. It's also a rough early version and could use a lot of clean up and improvement to make it more powerful and useful for its spell level. If given a few years or levels, or tutelage under a powerful MU, this spell jumps up to 1d6 damage and requires a saving throw or you get held in place one round.

[4] River's Babtism - 2nd level
This spell must be cast in a flowing river at around noon. The caster must dunk and wash the body of the target of this spell, and it cannot be cast on themself. The absolution of this baptism purifies and heals the sick and wounded- any common disease is ended and all poison that could be cured with an antidote is cured. This spell also has minor regenerative properties; for example, it could restore a chipped tooth, a finger or toe torn off at the last digit, heal back a patch of permanently burnt skin the size of a postcard, etc. Additionally; it restores 2d6+2 HP.

This magic spell is quite powerful and may be a hint that Hotar is actually a spellcasting savant.