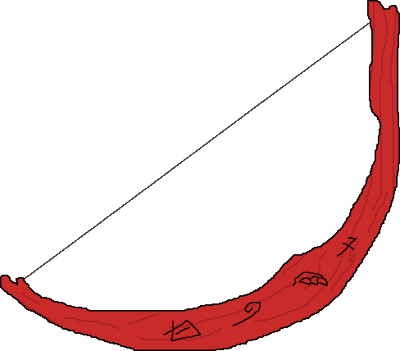 This bow is carved of red wood. It's very old, but well maintained with oils harvested from an ancient grove of trees; planted just when the city was first founded. Several simplistic paleoglyphs are burnt into its side; which are the symbols for protection, beast, pierce, and wind.

This power has two primary abilities. The first are related to its glyphs. As long as you carry and have mastered the bow, you may invoke each glyph-word once per day to create simple magic spells. These act as either advantage rolls relating to the word, or as minor coincidences that help you out. For example, you could roll an attack with advantage against a wild animal by firing an arrow at it and invoking Beast. You could change the direction of a breeze using Wind to sneak up on a creature. The power of Protection can be used once per day to reduce the amount of damage you take from any source by -1 point, or by giving you advantage on a single saving throw, and so on.

The second power of the bow is a ritual. In order to perform the ritual, the user of the bow must name and prepare a special arrow; just a standard arrow tied with beads, painted, and pointed to the four winds and such will work. They must save this arrow and use it only once against a specific quarry that the user promises to slay to the bow with this magic arrow. The arrow will strike for 1d20+1 damage on its first and only hit against that target. If this ability fails to kill the target, the bow will lose your favor and you will have to regain its trust in you as a hunter. Also, you get no advantage on the To-Hit roll with this special ritual arrow attack besides the normal +1 this magic bow grants.

The bow is tied to the powers of nature and to hunters. The bow only works for hunters who have never lost a quarry. Contrary to most magic items, it has no problems with an even seems more attracted to those who have never hunted or held a bow before; the inexperienced have much to prove. This weapon does reject those who have attempted and failed a hunt. Failing a hunt in this case is losing your prey over several days of extended chase and losing them for good, giving up, or having the prey die or be taken by something else. This bow also doesn't care about you failing to kill people or other stuff, just things that you specifically set out to kill.

It is possible to earn the bow's favor again (though you cannot use the bow to accomplish this feat, and it must be carried with you instead) by hunting an even more powerful beast or progenitor of the one you failed to catch the first time. So if you tried to kill a white wolf and it escaped you, the bow will not function for you, but if you vow to slay a great wolf Nature Spirit and succeed, bathing the wooden bow in the beast's blood and wrapping the bow in its pelt on the journey home- it will have regained its trust in you as a hunter.