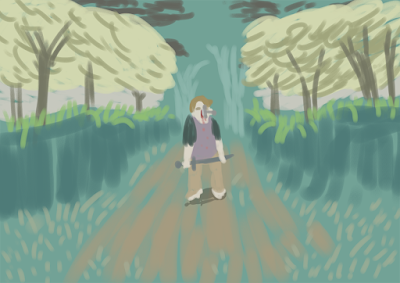 Swordyface
The swordyface is an undead being, created by this spell. The magic user must themselves have some amount of fighting ability to cast this spell- and as such this spell is more suited to battlemages or evil emperors who do everything because they're big-bads and aren't constrained by a gameified class system.

The Swordyface is made by stabbing a sword through the face of a defeated opponent. Typically the swordyface is made with a humanoid creature, but any creature can be made. If the caster slayed the creature themselves with the sword used for this spell- the resultant creature has an unlimited morale and will always fight as its master demands. If the creature was made using a different sword, was stabbed into a corpse not created by the magic user's own hand, or you don't have any combat ability- it is created with a morale of 6 and is cowardly. These also have nothing to do with the Swerda, I swear.

The Swordyface has the same HD and abilities of the creature it was made with, with two exceptions.

Firstly; It keeps biological and magical abilities; but not spells or divine powers or anything that would imply they retain the same knowledge or intelligence. It also counts as an undead creature, making it vulnerable to turning; but it gets a morale check to see if it flees or is destroyed from a turn undead roll.

Secondly, the Swordyface does not retain the To-Hit, AC bonuses (besides armor) or other combat bonuses from the body it was made with; instead it inhereits these from the magic user who created it. The Magic User loses these abilities for the duration of this spell; which lasts until the Swordyface is destroyed or the sword is removed from its face, ending the spell. If the sword is removed by someone other then the magic user who made this spell; the magic user does not regain their fighting abilities until they get the sword back.