The liptaker, or less commonly "hourtaker", is a minor bad spirit. It is equivalent to a lesser version of a nightmare or boogeyman. It appears under the bed of its victim and reaches up while they sleep. Its skin is very dry and rough, like old paper, and it puts its hand within the victim's mouth, gently rubbing their tongue to steal moisture from them.

After doing this, the victim will wake up a few hours earlier then they expect, their mouth dry. They don't want to get up from their comfortable bed, but they're thirsty and can't go back to sleep without getting some water. The liptaker will keep attacking the same victim multiple times, resulting in them waking up an hour later again and again, an hour apart at a time, until they either force themselves to get up or banish the entity totally by drinking enough water.

The best way to defend oneself against the liptaker is just to simply sleep with your mouth closed, easy for those who are not overly fat, who do not have overly large pillows, and who don't snore. In this case, the liptaker will simply rub its fingers against your lips while you sleep- stealing bits of moisture, but not enough to upset your sleep until you wake up at the proper time. 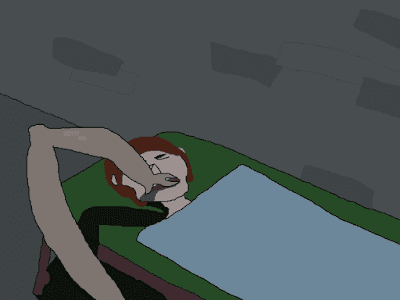 This minor spirit is very cowardly and weak. It has long claws that allow it to stretch up to a sleeping victim's mouth. It is scared of sunlight but not destroyed by it- since it often needs to attack while a small amount of morning light has entered the room where the sleepers are. The Liptaker is also a type of boggart, appearing in dark places and harassing its victims, meaning it can be destroyed by any method that destroys such minor apparitions. Occasionally, these creatures are summoned and modified or empowered by sorcery, which is the only way they could be more then a nuisance.

Email ThisBlogThis!Share to TwitterShare to FacebookShare to Pinterest
Labels: Monster