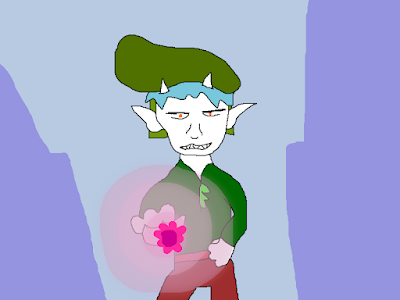 All Tricksters begin with;

Trickster's Form - Roll 1d8
[1] Bipedal Cat (+1 AC, no fall damage) Like puss in boots. Can also talk.
[2] Kitsune (Casts Change Self at will, Fox form) All of its forms have a fox's tail.
[3] Imp (Unlimited Eldritch Blast at 1d4, Alignment Shifts to Evil) Burns flowers while laughing.
[4] Gnome (Can disappear or turn invisible once per day) Has the stereotypical hat.
[5] Goblin (Rides a 1 HD giant rat) Diseased, depraved, pathetic. Typical goblin.
[6] Kobold (+2 to saves, has +1 Escape Tool) Clever little bastard.
[7] White-Faced Monkey (+1 AC, +1 To-Hit & Damage) Medium sized monkey; face like porcelain. Communicates through hand signs since it can't talk.
[8] Leprechaun (Reroll any failed save once per day, pot o' gold) Will offer you a pot of gold to spare it the first time you manage to catch it- will do almost anything to get it back.

Trickster's Skill - Roll 1d8
[1] Lockpicking (+1 To-Hit) Quick hands, little toolbelt.
[2] Pickpocketing (2 in 6 chance to steal something important on first reaction check) Cheeky.
[3] Tumbling / Juggling (Can Move Thru in combat, wins chases) Even more slippery then normal
[4] Disguise (Can appear as a common lone monster or random human NPC) Wears little stilts.
[5] Bushcraft / Survival (Has a 1d4+1 shortbow) Good at tracking, and avoiding being tracked.
[6] Poisons (Poisons their knife with save or take 1d6 damage + vomit for a round) Burnt fingertips.
[7] Magic / Lore (Knows an extra 1st level spell, casts spells as though one level higher) Forehead is inscribed with an arcane rune.
[8] Appraisal (Knows what the first magic item you try to use against him does) Has one of those zoom-in monocle eye-glass thingies.

Trickster's Special Ability - Roll 1d8
[1] Can mimic voices.
[2] Can make its shadow look like the shadow of anything else.
[3] Can turn invisible for one turn, once per day. If Gnome; can stay invisible indefinitely.
[4] Can squeeze under doorways/into tight cracks.
[5] Can hide a magic wooden nickel in your coinpurse. He can "hear" what it hears.
[6] Can tap doors or chests to unlock them or lock them. If their skill is lockpicking- they can also use this on magical locks.
[7] Can entrance one person while it plays an instrument. They can't move, attack, or cast spells and have to just listen. Effect ends if music stops or if they are hurt while listening.
[8] Can transform into a terrifying 4 HD Where The Wild Things Are style fluffy ogre monster if it gets really pissed off. It can't choose to enter this state, you have to antagonize the trickster, foil too many of their plans, or back them into a corner with no escape.

Why can't you just walk up and stab him? - Roll 1d8
[1] The minion of a much more powerful monster.
[2] Has hidden the mind/soul of an important person in setting- their body is a husk without it.
[3] You owe him a big favor.
[4] He owes you a big favor/a lot of money/a magic item.
[5] Knows an important bit of information and isn't sharing.
[6] Has a deadly/awful curse that will spread to whoever slays him.
[7] You can, so he has to plan for it. (+1 Escape Tool)
[8] You can, but he is cursed with immortality. After each death he returns, he has -1 maximum HP and looks more ragged and decayed each time. Once he reaches 0 HP he becomes a pathetic, impotent spirit.

Escape Tool Table - Roll 1d6
*Note: Only roll on this table if another table told you to. Each Escape Tool can only be used once unless otherwise stated, and the Trickster will use it intelligently if they can.
[1] Smokebag of Sleep - Makes purple cloud that casts Sleep on anyone who breathes it.
[2] Wand of Fling - Flings what it is pointed at upwards up to 30 ft- up to an elephant. Three charges.
[3] Mirror Talisman - Reflects the first spell cast on them back to the caster, then shatters.
[4] Darkjar - Sucks up to 1d6+1 people into a magical jar. You're trapped inside for 3 turns, then return to normal size and bust out. Breaking it early also frees whoever is in.
[5] Decoy Log - Makes a Ninjitsu log that absorbs one attack. The user is teleported 15 feet away in a little puff of smoke. This log can be used retroactively after the To-Hit and Damage.
[6] Floating Umbrella - Allows for gentle gliding from any height. Could work on something as big as a human, but only if they were totally unencumbered. Used unlimited times until it gets wet.

(Optional) Trickster's Lair - Roll 1d6
[1] Stereotypical dungeon-floor. Zero monsters; filled with only dangerous traps.
[2] Wing of a mansion. Lots of treasure.
[3] Hidden workshop. Need to crawl to get in; tons of gizmos and unfinished parts.
[4] In an old rotten tree. Bigger on the inside. Mushroom garden feeds on old bark.
[5] Inside the belly of a whale/dragon/hibernating bear. Crawls in when they're asleep.
[6] Within a dollhouse.

(Optional) What big trick is he trying to pull on you? - Roll 1d6
[1] Awaken his master or an ancient evil.
[2] Activate a magic curse so he can switch his weak body with a stronger one.
[3] Scam the realm during a crisis; becoming so wealthy that a dragon would be jealous.
[4] Find a trapped genie for him, so he can wish for his heart's desire.
[5] Stealing something from its rightful owner so he can misuse it.
[6] To humiliate and bamboozle you; simply because it's funny.