In many settings, there are evil gods. But this contrasts, or is downright contradictory, to a traditional religious afterlife system of heaven and hell, or multiple heavens and hells. Especially in fantasy worlds where the afterlife is a proven, absolute "thing" that everybody knows about- why would ANYONE be evil or serve the dark gods if they will just end up in hell?

Sometimes, the dark gods will offer a worshiper a good or decent afterlife. This makes their evil moreso a service to the dark god in life to earn a reward after death- but this lacks the feeling that good people are rewarded and bad people are punished. The cosmology will be messy. Many people enjoy the thought of karmic justice in the universe, even if it doesn't exist. Fantasy worlds, which are often at least partially a form of escapism, can serve to fulfill this fantasy.

Second; reincarnation. The concept of being reborn into a higher or lower life form based on your deeds and virtue in life is simple, and positive. However, it comes with another problem; the individual is being punished for their actions in the next life, not the one they lived. They have no memories of their previous incarnation, and can almost be called a different person. It may even seem cruel.

Then; you have a combination of reincarnation and hell; where people are reborn into hell to suffer to clear their karmas or sin. This is a concept found in Jainist beliefs. Now, don't take me as criticizing a real world religion on this, but it follows the above problem, plus it doesn't truly explain the origins of devils. If Gods, animals, people, and so on are all souls of the same beings all the way down; why not have people turn into devils instead?

I've also seen the D&D explanation that people are actually reborn into devils, sometimes starting as a tiny soul-worm which has to work its way up the ranks to become a powerful demo, which I kind of like. Of course, this raises the first point of "how is this a punishment?". How is getting to become a powerful, immortal, magical demon creature in any way a punishment? You were evil in life, and then you become a creature that can do even more evil, but is driven towards it even more. The politics of devils may be very cutthroat or dystopian, but it seems to just encourage evil behavior then punish it.

So let's take this out a bit to its logical conclusion. There's no reason this can't work- in fact, I'd say it's the best solution to the issue. 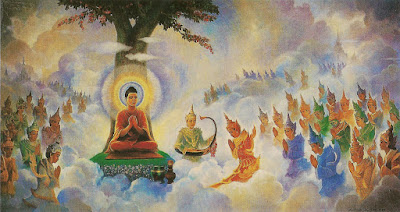 When you die, you will be reborn into a new body. It will not be a mortal body; and you will remember everything about your past life. You are changing states, but are the same person. Death is still irrevocable- unless your spirit is powerful enough to carry on as a ghost or be resurrected. Some spirits and bodies can linger for hundreds, if not thousands of years before "passing on". In the grand scheme of time, these are merely intermediary stages.

People of a higher spiritual order will be revived as Devas, the higher forms of angelic superbeings. These are not the same as Gods, who are the powerful creators or preservers of the world. They are contrasted by the Dark Gods, Elder Gods, or perhaps Satans if you like this contrast. Devas are immortal, ageless spirits who attempt to guide the world and the beings in it towards higher levels of happiness and spiritual wholeness, as well as battle against the forces of darkness. Usually indirectly- such as in the form of all white animals. Devils are much more likely to appear in their full force- but that goes beyond the scope of this post.

People of a lower spiritual order will instead be revived as Devils. The demons, who live in the hell worlds. Contrary to what people believe, there are no mortal souls in hell- baring very few exceptions, like people who go exploring there, everything down here reincarnated as a devil. Also contrary to belief, no power can force a soul to come there either without its own choice or karmic imbalance. Innocents sacrificed do not have their souls sent to hell, devils simply enjoy seeing the torment of the beings on in the living world.

Devils are mismatched creatures, built of many conflicting, chaotic animal parts. They are powerful, and can become more powerful then mortals simply be being evil. Many devils built their entire mortal lives around being as evil as possible; to become the most powerful demon they can be. Many are even further seduced down this path because the least offensive demons remain as tiny imps and servants in the demon realms- what humiliation to be trapped as that!

Of course, they don't know any better.

Demons can ascend an infernal hierarchy through their deeds and karmas. Tricking mortals into sinning is the best, and some even attempt to claim ownership for the first few thousand years of the new demons "life" as their servant if they were the ones that offset their karma. Causing wanton destruction, confusion, and suffering are all good too- increasing the demon's strength and influence. 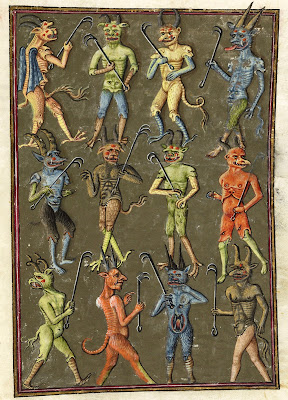 Of course, these demons constantly seeking more power and influence don't understand- none of this is making them any happier.

Even the most miserable humans can have a few moments of respite. The short-term satisfaction of indulging, an act of kindness given or received, or a sense of peace in a natural place. These pleasures, and several others, will happen from time to time to even the most evil of humans. But once you become a demon? That all changes.

You see, power doesn't make people happy. Neither does riches, nor fame. Peoples sense of what they want doesn't change once they become devils- none of them like the place where they are. That's why they try so hard to be summoned or open portals into the mortal world; hell is not so much a prison but a reflection of what they've become. Dead, barren lands filled with crumbling ruins to hollow ego, lakes of fire and bile, mass darkness and howling void. Demons would much rather live around clean lakes and fields of green grass, they don't understand that their domineering, arrogant ways are what causes this place to look like this.

Demons still have vices; satisfaction of vices is a very physical trait, to quench thirst or desire for sex are based on biological processes. Demons don't have these, but they still mentally desire these things. This means these acts can't actually satisfy them, because it is greedy, lust, or gluttony that inspires them forward. It is not a reward mechanism for a living thing to survive and reproduce, who merely exists as something they want more and more of, eternally needier the more they can satisfy it.

Many demons will try to become more and more powerful, not understanding what it means. The more powerful demons have the most enemies, the most to lose, and hunger for more and more. The weakest demons, the imps and little spirits of evil, can sometimes be spared a lashing whip from a superior, or to have their immortal body rendered apart by a rival. This isn't true kindness, just being passed over by being so insignificant. Even this tiny bit of peace is still something that makes the lesser demons ever so slightly better off then a greater one.

Humans, arrogant and blind, will disregard the spiritual matters of wisdom, kindness, and peace to focus on their own power and status do not know what lies at the end of that road. Everyone knows that forgiveness, freely given from the injuried, is a far greater force of justice then punishment; demons do not understand this, nor do they want it- that's why every slight against them is met with horrendous torture. Everyone knows that the more riches one gives, the more they truly have in the spirit- they have no attachment, and thus, don't need it. Demons don't understand this, which is why their mountain  of pillaged treasure feels worthless as dirt. Humans who try to build their afterlife towards evil are setting themselves up for failure, and they don't know it. The most egotistical, greedy, hungry men will become devils, and then these devils can climb the ranks to become greater demons, until eventually they can sit on the throne as the archviles.

At the peak of devil society are the most powerful demons, with masses of slaves, dark magic, riches plundered from the earth and below. And these devils live every day of their eternal life in spite towards everyone and everything else. Their own servants cannot be trusted, they are locked in eternal struggle with their rivals, their power and strength grants no joy beyond means to an end. Each and every one seeks ways to gain dominion over hell, and then the earth, not understanding that if they did, they would just be the most miserable person on it.