Why am I using the term "badass" here? Because every other list is going to just say "magic" instead, so who cares. It means the same thing. We don't have enough cool magic spears. It's always just swords. 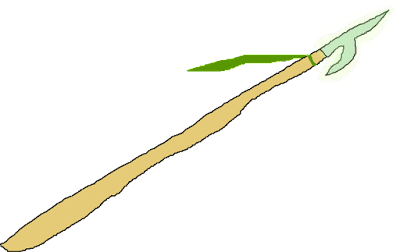 10 Badass Spears
[1] Edamame - 1d8+2
Named after a simple cooked seed dish, this spear is so named for its bright green pod on the end of it, edged with a sharp seam. Three times per day, the user of this spear can swing it and force the pod to magically open up; releasing a sudden burst of Entangling Roots in a cone. These roots also puncture and spread shoots through whatever is struck by it, dealing 1d6 damage.

Additionally, if this spear lands a killing blow on a creature of at least one HD, all enemy creatures adjacent to the slain creature must save or be entangled by a small explosion of grass and vines that shoot from the slain enemy's body. These roots are intelligent enough to avoid striking both the user of the spear and their allies; making this weapon very powerful.

[2] Love Point - 1d6+1
Spear whose bright metal tip is dipped in orange paint. Has a long dark gray shaft made of unusual, far-away wood that is stronger then oak. The spear has a sharp, flat head.

When the spear is gripped and pointed at a creature, they must make a save. If they fail, they will slowly walk towards the spear and be able to attack the spear user. Every round, they will get closer- until they will begin to impale themselves on the spear and walk into it, thus killing themselves. Assume it takes about three rounds to impale oneself on the spear from a general fighting distance. You can make being impaled lethal (perhaps a save vs death for the final round?) or just make it do maximum weapon damage each round they keep walking into it.

Love Point has a second ability. Whoever routinely feeds it their blood will be considered its "owner". As long as you are Love Point's owner, you are immune to mind effecting spells, and you can summon the spear to fly into your hand from a distance. However, if enough attacks are done against an enemy, it may "switch" ownership, thus making you vulnerable to having the spear taken.

[3] Fiendish Point - 1d10+2
Spearhead is a bright red metal, forged from unusual alloys. It was (probably) forged in hell. The weapon is immune to melting and corrosion, and its head is always warm to the touch.

Once per encounter/turn, the Fiendish Point can charge up a blast of flame and release it at a target you are pointing the spear at. This flame blast deals 1d6+2 damage, and can be fired at throwing range.

Once per day, the Fiendish Point can charge up a blast of hellish heat- and create an invisible field of super hot air. The heat is enough to fill 6 squares/hexes/equivalent in sq ft of space in any shape the caster desires, as long as they are all touching. Anyone standing in the heat loses -2 to their To-Hit and Damage from the sweat and fatigue. Any ice effects like weapons made of ice or people frozen in ice are thawed out in seconds. Out of combat; the intense heat can be used to dry an entire small campsite after a rain, steam up a sauna, or make a tent totally warm for a full night.

Once per owner, the Fiendish Point can be used to sign a minor magical contract with a devil. The owner of the spear simply needs to tap the butt of the spear on the ground three times, while saying "Let me talk to my lawyer". One soul (especially one as morally dubious as yours) can be exchanged for a few decent things, like seven years of good luck, a hearty sum of gold, or another magic item, but don't kid yourself. If you ask to rule the world in exchange for your soul or something the devil will just take the spear away and give it to some other sap.

[4] Walking-Spear - 1d8+1
This spear's dull end can be tapped on the ground to click and hide the spearhead into the shaft, giving it the appearance of a simple, sanded walking stick. This also allows it to be carried as a stealth weapon.

The first day you are in a new place, you get +4 to hit with this spear. For this definition, a new "place" is a general geographical area or locale with at least some size. So your "first day in a new town" or "first time explored the caves" would count, but not first time stepping into a building or wing of a dungeon, for example.

[5] Rainbow's End - 1d6+1
The entire spear looks like it is made of a slightly blue-tinted glass made from a single piece. The spear is just as deadly as any other, and no less durable then a normal spear, but anything that would break a spear or if a corrosive weapon effect is applied this spear would shatter in a million pieces and be lost for good.

The inside of this glass spear is hollow and within is a swirling pillar of colors. Once per day, the spear can be activated by its user to cast Color Spray, OR it can be used to create a single "wall" color from the spell Prismatic Wall shaped by the user in front of them. For both, the "caster level" of the effect is equal to the user's To-Hit bonus with melee weapons. This weapon recharges by being left out in the sun for a bright, sunny day.

[6] Horse - 1d6+2
Standard, dependable looking spear. Tassel wrapped around the head made of a horse's tail hair. If you tuck it between your legs, and pantomime running with it, it will fly a few feet off the ground- like a limited flying broom. If you try to ram the spear into something while riding on it it deals 2d6+2 damage on impact but sends you flying over top of your target because you forgot that you're not actually strapped in to anything.

[7] Taboo - 1d8+1
This spear has a shorter then average shaft, wrapped in purple cloth. It smells lightly of flowers. If you hold the spear's shaft in your mouth horizontally, no spell cast by a spellcaster can effect you. The moment you remove the spear from your mouth, every spell cast on you takes effect at once.

While this power means you can essentially become immune to magic, you can't talk (and cast your own spells), eat, or pass through small passages as the spear would get blocked. You also obviously can't attack with the spear, unless if you spin around and just barely scratch people around you- 1 damage at the most for an "attack" made this way unless you're a freaky martial artist master.

[8] Master & Apprentice - 1d10+2 & 1d6+1
This magic spear is actually two spears. They look identical; dark grain wood with shining silver heads, but one spear is significantly shorter then the other and has a head that is slightly smaller and less imposing then the first. The two spears are inextricably linked, and will always find themselves back together again once separated.

If you are holding the Master's spear, you have the more powerful of the two spears. You gain the power of a random Blade Art, which changes each time you draw the spear to a point at a foe. However, you have the burden of an apprentice. Each time the character armed with the Apprentice spear takes damage, you get 1 shame token. These shame tokens force you to drop the spear when you reach a number of shame tokens equal to or greater then your To-Hit bonus from your class and character's abilities.

If you are holding the Apprentice's spear, you gain the guidance of the master, and the flexibility of the apprentice. You can, once per round, strike at the same target that the Master's spear has successfully hit- you will automatically hit the target on the same roll or better on a d20 as the Master's spear hit the target. Your spear is also shorter, and thus better used in tight spaces.

The spears don't technically have to be used by two different people.

[9] Moon End - 1d12+1
Barely qualifies as a spear, as the long wave on its head makes it almost a polearm, but is still primarily a thrusting weapon. Whenever you miss a target with this spear, the edge of the moon-blade will still cut them with supernatural force, dealing 1d4 damage.

Additionally, this spear has the power to control darkness. You can cast Darkness once per day, or extinguish a single light source. While holding the spear, you have dark vision out to 20 feet. Your eyes glow a pale silver-blue.

[10] Uladide - 1d8+2
Named by the elf grand-master who once wielded it, this legendary grand weapon is of no small renown. It is made of a pale white-gold metal, with gold leaf designs flowing up the end of the shaft and "blooming" into the blade like an opening flower. The shaft itself is made of some kind of jade-metal-wood material that is flexible and strong. You could use this spear to pole vault over gaps, for instance, or use it to stop a ceiling-trap from collapsing down on a room a moment, though eventually it will be bucked loose from getting bent too far, it won't break from such rough treatment.

Firstly, this spear grants an extra spell slot to anyone who has mastered it. If you meditate with the spear during downtime, you can prepare an extra spell, the magical energies of the spear mingling with your own.

Second, Uladide is a thing of beauty, and a work of art. It invisibly guides its user to flow and to pose dynamically, creating an entrancing effect. Those of 1 HD or less cannot move or attack if they see Uladide in action; they are entranced by its motion, its shine, and its magical power. Essentially; stun everyone of 1 HD or less who is in the battle with Uladide. Those allied to the user of the spear are not immune, but can get a saving throw to avoid looking at it each round.

Because of its beauty and power, this is an Ego weapon. It will only serve a master who has at least a +4 to hit in combat and can cast 3rd level spells or higher. Or just make it so it will only serve someone who has a HD of 8 and is of Neutral or Lawful alignment. If one does not meet the requirements, using the weapon will cause the spear to bend wildly the first time you try to stab it into something, flopping itself away from you on the ground and being totally useless. Those who try to use a magical ritual or force to master the spear must save vs magic or have their bodies frozen into white stone.