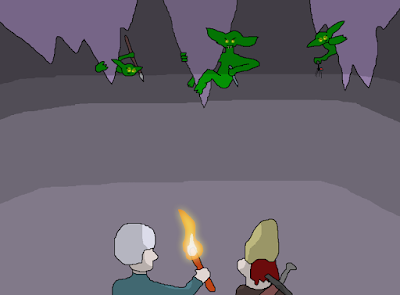 [1] The goblins have smeared some foul-smelling oil on their heads. They lit it before going into battle; perform flaming headbutts. Take 1 damage a round but +1 damage when they hit.

[3] Swing pendulum traps at you. They laugh and don't notice them swinging back to hit them.

[4] Poop throwers. Pretty gross, but they'll realize they forgot to carry actual weapons after three rounds of pelting you.

[5] They make a very obvious disguise of three goblins in a trenchcoat, try to learn "fellow human secrets from fellow humans like me because I am a human. Let us go to sleep now, my human friends."

[6] Long wooden spears. They have four goblins on each, run at full speed and try to ram you. Might actually do 1d8 or so damage. On a miss they ram into a wall and all fall down like morons.

[7] Give you a young, cute goblin girl to be your slave wife, demand massive bride-price you can't pay. If you actually pay it, they'll just kind of leave you with her while being confused. She'll be pretty confused too, because she forgot to stab you in the back while you were arguing.

[8] Goblins load up into a barrel and shove themselves down a slope at you. Didn't account for dizziness.

[9] The goblin shaman leaves behind a cursed item on the ground, very obviously made by goblins. They can't stop whispering and giggling around the nearest corner.

[10] Leave behind a few dead adventurer/goblin bodies on the ground. The goblins have put carnivorous larva inside the bodies which will pop out and attack if you loot them. Actually a pretty good trap.

[11] Burning book. Tries to 'close' it on your hand or face, thinking its going to do significantly more damage then just hitting you with the book, or throwing it.

[12] Severed, clawed hand of another monster or undead creature tied to the goblin's wrist. Tries to punch you with them. 1 in 8 chance it's a ghoul claw and still carries paralysis.

[13] They sling little clay balls with mild acid at the core. Will weaken your armor by -1 AC if not washed off after battle.

[14] Goblins shoot themselves out of a catapult made of big monster bones and stuff. 1 and 3 chance to make it over the wall or pit.

[15] Goblin "martial artist" wants to show off his new secret move. It's just a dick punch.

[16] Goblin has stolen a cool orc prosthetic, and chopped off the appropriate body parts for it. It's hilariously oversized on him.

[17] Goblin has produced a giant spiked dice, used in "death gambling". It's not a very good weapon, but if you ask him about death gambling he'll stop attacking you to talk about it; and it's really cool. Basically you jump down in a pit while goblins throw giant iron dice at you and you try not to get crushed. If you're a human it's really easy (because the dice are meant to crush goblins and not people), they'll catch on to this after you win a few thousand coins.

[18] Fat goblin. Jumps on people from above.

[19] Fat goblin. Heavily armored, has a large piece of scrap metal as a sword. He's the goblin's elite unit. Stats as bandit.

[20] Goblin's hidden in a great pot of stew, breathing through reeds. The stew was cold when they got in. If you take more then a turn to check it out, they'll boil alive and die.

[21] These goblins made wings out of random junk and giant-insect body parts. Actually kind of ok at gliding or negating fall damage, surprisingly enough. They want to drop down from above you, holding daggers in their mouths for when they land, not realizing you can just hold your spear upwards.

[22] Goblins on a horse! Seven goblin "knights" all riding one horse. The horse is terrified of them. Every time it rears up 1d4 goblins get knocked off.

[24] Goblins fire gremlin/runtish goblin out of a crossbow. Launched directly at your face. Takes a round to pull the little fucker off.

[25] Goblin has a loud maraca filled with beads and bone-bits. Since it scares other goblins, assumes it will scare you as well.

[26] Goblins wait until you're asleep. Then walk into your camp, wake you up, and inform you that "we're not actually here you are DREAMING this right now!"

[27] Goblin pastry chef attacks you with tears in his eyes. He's lost his goblin-hood according to other goblins, constantly belittled for making nice things. They forced him into this.

[28] Goblin attacks you with a dead fish. Tongue-consuming bug parasites come out and try to crawl in your mouth. Stats as 1 hit-point creatures. If they reach your mouth, save or have them bite off your tongue and replace it in function. You can still talk and cast spells and eat and stuff, you just sound weird. Also very gross.

[29] Goblins are wearing lizard skin armor. They get +1 AC. They know the lizard skin is magic and can regenerate after being cut. Didn't think how they were going to get out of the suits once they put them on, since if they try to cut themselves out it will just grow back.

[30] These ones are carrying "booger bombs"- severed heads of sick goblins who had their noses stuffed up and then were decapitated once the pressure started to make their skull muffin out. If thrown and hits something hard the "head" will explode dealing 1d2 damage and coating everything nearby in sticky boogers until cleaned off.

[31] Buried themselves in the sand to pop out and attack. They forgot to cover up their ears, which have turned a dark emerald after being badly sunburnt.

[32] Carrying a pot of boiling stew on its back. Will spin around to try and fling it on you; if you hit him he falls down and it pours out all over his head.

[33] Goblins armed with metal pipes- bang against rocks to make lots of noise in an attempt to scare you off. If you wait a few rounds their pipes will be bent and useless.

[34] Goblins have forced a hedgehog to swallow a bit of line and a fish hook. Hold onto the line and spin it around as a flail.

[35] Goblins are posed as tax collectors. They come to you demanding your gold. They throw around words like interest, duty, principle, deductions, rate, and tariff basically interchangeably.

[37] Goblin has found a magic hammer. Holds it by the wrong end; still releases a chain lightning bolt on hit- will hit the goblin first, then bounce to you.

[39] Goblin magician has bargained with dark entities for power. Has 1 HP, crippled, carried in a wooden cart by other goblins, knows a 1st or 2nd level spell.

[40] Absolute psychopath of a goblin had his arms and legs removed and replaced with blades. Can spider crawl on the ceilings, do breakdance cutting moves. Terrifying.

[41] Goblins have taken homemade "goblin grease" and smeared it across a smooth stone floor in this part of the dungeon, while lobbing spears and rocks. Try to goad you into running at them.

[42] Several cages containing "trained" giant rats are released towards your party. They are "trained" in the sense that the goblins point them at you first, but they will attack anything.

[43] Goblins have several long poles. They don't try to hit you, moreso just push you onto the spike and pit traps they know are nearby.

[44] Curse-Hoarder goblin. Group of goblins have one dedicated to getting cursed by everything- he's so badly cursed its basically contagious. Deals no damage on a hit, but the next time you roll a saving throw it's an auto-fail from his bad luck.

[45] The goblins have woven a net from bat hair and cave vines. Big enough for a goblin, not for a human. After they throw it on you- they are confused for one round.

[46] Goblins have flaming/explosive oil. Couldn't make something watertight, so they just carry it in their mouths instead. Try to spit on your torch; they cough and sputter for 1d3 rounds afterwards.

[47] Five to ten goblins with slings, lined up in a row, firing volleys of sling bullets. If you squeeze them into a tight space by getting them to chase you; they'll accidentally knock each other out by swinging the bits of cloth they're using too hard and hit each other in the head.

[48] Goblin mime. Done up in white and black paint on their body, does weird hand gestures as goblin's sneaking around drop props or flip switches to make the mime's motions reality. The mime is so into the role that he'll respond appropriately to your own hand gestures too.

[49] Mad scientist goblin has figured out how to make a chainsaw, basically. Four goblins are spinning wheels behind him on a box with a cable that connects to the chainsaw device to power it. If you just slash the cable it stops it, easy.

[50] Goblin fungus-shaman yells at you- saying you're all about to die. Feeds glowing red mushrooms to his subordinates. Nothing seems to happen and the goblins despair. If any are alive 3 rounds later they mutate, gain +2 HD, turn red, and become as big as orcs.