Note: This was originally written for a .pdf and because I don't know html very well, I didn't do much formatting for this blog-version. You can find the better pdf version here. 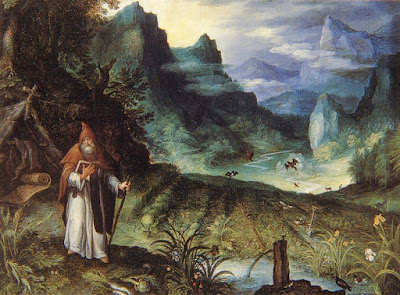 (1) The Hermit of the Valley

You are an middle age/old hermit who lives alone in The Forgotten Valley. It is a beautiful, peaceful, fertile place that nobody lives in but you. You've lived all alone for as long as you can remember.

You have no weapons, magic spells, allies, or money. You live on the plants you grow and are kept company by the songbirds and deer.

But something goes wrong in the valley, and you have to fix it, or else your way of life will end.

Optionally- you can have your Hermit have one special trait, skill, or “thing” about them that gives them a fighting chance. Since I like the idea of the Hermit not having anything special at all just as much as having something special; it can just be a 50/50 chance if you want to make it random.

You are a scholar, librarian, and part-time mystic. For your great deeds in the university where you work, and because of the fact you are not needed to educate the next generation- you have been chosen to serve as the educated, wise advisor for the King of the land.

But there's a problem- you're mute! You can't talk. You understand speech and written word perfectly fine, but you've never been able to speak. The letter sending you to the royal palace makes no mention of your disability; you are still expected to serve. How will you advise his majesty?

Though you have just become the advisor, the Kingdom or the King himself are in great peril the moment you arrive and require immediate attention! Failing to do your job could mean the death of you, the King, or far worse.

Roll once on the Peril table. You could roll multiple times for several years or seasons worth of troubles.

You are a powerful, vicious beast of the wilds. With winter soon approaching, you must feed on whatever prey you can to become strong enough to hibernate and give birth to your cubs next spring.

You have found a new type of prey. Weak and slow, they walk on two legs. There is no fur to pick out of your teeth. They have terrible hearing and smell; but their vision is good and they have many strange weapons with them; sticks and stones tipped with bone and stone. You have found your suitable shelter for your hibernation; it is not far from the camp where these beings live. Feed and get fat for the winter.

The table below is a list of beastly features. You may roll more then once to shape your beast.

In your world, powerful men and women with magical fighting abilities are highly prized; they become popular and very rich. However, it is a rock-star life style, leading to burnout, high pressure, and dying early. These people are called Platinum Stars.

You would have lived a normal life in the modern city where you live, in a small and unimpressive apartment, until you revealed your power. You have the strength to lift a small car, incredible coordination enough to deflect bullets, excellent acrobatic abilities to jump over buildings- and one power below.

Being a Platinum Star means great risk. While you have these incredible abilities; you are expected and pressured to battle the foes, who may or may not attack and kill random civilians and attempt to destroy society.

Roll once on the Foe table for each “arc”.

Never satisfied with a boring life; you have spent your life wanting more. After much training and socializing, you manage to acquire special funding and a crew from the powers that be to go on an expedition! Fame and fortune, but also incredible danger await you.

The tech period here is up to you; but I imagine an early modern / age of discovery sort of level.

The crew are the important NPCs who will join you on your journey. You may roll as many times as you need to round out your crew, or as many as you could reasonably employ on your vessel.

Once you've rolled your crew, you must then choose your role on the expedition, picking whatever remaining job or role you would need on this dangerous expedition.

You are a wise, reclusive hermit. You have rejected all earthly pleasures, and instead focus your life on spiritual pursuits and inner peace.

While there were many like you, you once managed to perform a miracle. Because of this miracle, it has proven your spiritual purity and strength- it has elevated you from a common wise man into a traveling guru, spreading wisdom and righting wrongs.

This miracle is something you did in the past, but does not necessarily mean you can do it again. Divine inspiration only strikes rarely, but you can still have abilities beyond the keen of the average man. After all; you are a enlightened one.

As a wandering mystic, you will come across a town which has been consumed over a type of sin, or the entire town has been disheveled by one single, especially egregious sin.

Can you mend the spiritual wounds and bring enlightenment to this place?

You are a ghost. Long since dead, your spirit is vengeful, and carries with it a deadly curse. Because of your unresolved pathos in life, you cannot pass on to the next, and must haunt the living instead.

You have a condition which must be triggered for you to begin your curse on someone. Your only goal once someone has been cursed is to kill them or hurt them by whatever means.

Optional- since this character concept doesn't have a set “end” point or victory condition, you could turn it around to say that the ghost only kills the first group of people who activate the curse, and from then on the curse is broken. Or, the ghost is a revenant who only seeks revenge for those who killed it when it was a person. You could also determine a special method of exorcism based on the ghost's weakness that can end you for good.

While you may seek to fulfill the curse; you have a single spiritual weakness present. The cursed don't know this yet, but can learn it to hold you at bay.

At the player's discretion, you can replace this with any other instrument. (Or any artform; but will require some table rewrites).

You aren't a person, you are a guitar. Magical, having been owned by just about every rockstar and blues artist at some point, you fall into the hands of a young, unknown talent. Your only “goal” is to bring fame and fortune to whoever plays you. This game could also be played episodic, traveling through different eras and genres of music; with the guitar changing hands and bringing its abilities along with it.

In a historical or fictional version of reality, you may be the instrument that invents a new genre of music when put in the hands of a young talent, OR you may be a magical guitar that is incredibly good at creating one specific genre of music.

Your legacy ends when;