Garden Guns
In Garden, guns are the tool of the masses to protect themselves, and for many, a way to earn their weekly paycheck. Guns are both the tools of the gang, as well as tools of the citizens. Needless to say, players will be using them a lot.

For this ruleset, we are stealing Goblin Punch's gun rules from his Eldritch Americana game system/setting, which was a big inspiration for Garden in the first place.

Gun Fighting
Whenever you shoot a Firearm, you must declare how many bullets you are firing during the round. For every shot you shoot including the first, you get the additional shots benefit for your munition type. For example, a pistol firing bullets would have +1 to hit and deal d6+1 damage on a hit if you fired a single round. If you dumped your magazine of 8 bullets, you'd get +8 to hit and +8 damage.

If you roll a 20 or higher when firing your weapon, your gun jams. Gun jams can be cleared by taking a round to clear the jam. If the gun jam was especially bad (30 or higher on attack roll), you'll need to use field repairs which take an exploration turn or short rest to clear.

If you run out of capacity during a firefight, you must take a round to reload. 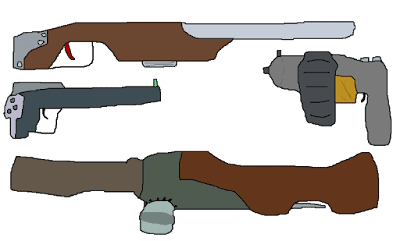 Chimney Generator
Gardeners need tools of the trade if they want to survive and thrive within their city. Almost all city-folk either own a firearm or can get one through a friend or college.

All firearms are made of parts. Sidearms are simplified weapons made only of a Munition, Barrel, and Receiver, but they have no inherent flaws. Take the lower, second number in parenthesis for both damage and capacity when creating sidearms. Sidearms only take one hand. (Base Load 1)

Chimneys are the big toys that are made up of a Munition, Barrel, Receiver, Stock, and Flaw. While having greater damage and capacity their flaws make them less reliable then Sidearms. Chimneys take +1 round(s) to reload, takes both hands to aim, and cannot be concealed as easily. Gardeners call two handed guns chimneys because of the soot, smoke, and need for constant cleaning. (Base Load 2)