The “elements” being the basis of a fantasy world is really important, I think. It's not necessarily that it has to be those four base elements- Fire, Water, Earth, and Air. But rather, that the fantasy world is not a faux-simulation of our own world. Giving a fantasy world unreal phyiscs; such as disease actually being caused by miasma and demons, is a great way to seperate the players from their own lives. It's verisimilitude right in the cosmology.

But the question is; what elements SHOULD really make up the fantasy world? Positive and Negative energy? Each God providing something unique? The four elements? I've thought about it a bit, and I quite like the classic four elements, but with one addition. 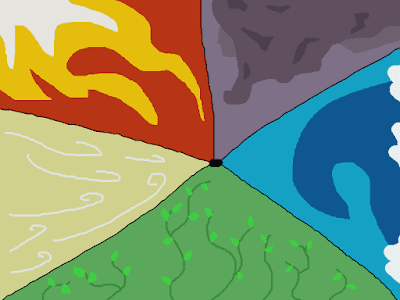 The Five Elements (Creative Process Tangent)
You see, having alternate element systems is fun. It gives an excuse to make the setting feel a little more alien then traditional Fire/Water/Earth/Air elemental worlds- and I love Wood as an element. But it's not just directly Chinese. Chinese elements annoy me actually; Wood, Fire, Earth, Metal, and Water? Why are there like 3 Earth elements and no wind or “clouds”? This is bullshit.

So instead, we'll just add the “Wood” element into the traditional elements. Fire, Water, Earth, Air, and Wood. In this case, I'd also call it Flora, Plants, Vegetation, “Root”, something like that. Flora sounds a bit close to Fire, but has a mystic feel and is short. Vegetation or Vegetable sounds too clinical and is too long; notice how all the elemental words are really short? “Root” or “Leaf” are also good names, and get a bonus for not sharing a first letter with any of the traditional elements; making for easy shortenings, but are only calling the whole element as PART of the plant, so that sounds kind of weird. PLANT element is a little boring but it works. We'll call it Flora for now.

Imagination
So in my mind, when I imagine world made of these “elements”, I think too literally. This is my fault of course, but in my imagination it's hard to imagine the actual philosophical oldschool ideas of the elements. Think of it this way; Fire is present in everything, but we only imagine fire in the natural world as an “element” as like wildfires, volcanos, the sun/heat/deserts, maybe lightning in some worlds- you get the idea. So I'd like my element system something you can imagine easily.

This is the other reason I chose the element of Flora for my Five Elements system. Because in my mind, I can imagine a world made with these five elements. And you can imagine it without any animals, which are a different class. Of course, in real life, we know that plants are just a different form of living things; but this is a fantasy world.

You can imagine it. The world is shaped by Earth and volcanic Fire. It has clouds and weather and wind, carving the mountains through the element of Air. It has oceans and rivers. But this would end with a four elemental system- like if the elemental “planes” just form together to create a new planet or plane- there's just primordial ooze here. No green hills, no forests, no deserts with shrubs and so on. It's just a rocky, barren feeling planet at this point. This is why I want the element of Plants/Flora in there as my five elements. I can imagine this world, even without creatures. And this makes some fun setting implications; are these worlds formed on their own? Do the God(s) make them? Do creatures “migrate” from worlds to inhabit new ones? The worlds they go to already have plants, landmasses, oceans, everything- it's a virgin world without men or animals or spirits to inhabit it. I like this, as far as imagination goes.

You can imagine that the different varieties of plants are different forms of the element, or mixtures of elements. Grasses form when Flora mixes with wind and/or fire, though fire is normally the enemy of Flora. Marshes and moss is flora + water, with little Earth to balance it out. Trees are the standard, with order/light being the mixture that produces nice happy trees and chaos/darkness is what creates all those pitch black gnarled woods and brier patches. In this fantasy interpretation, plants and trees are not so much living things as they are elements. This means they grow on their own, as long as sunlight and water is present. In the same way fire forms in the right conditions, plants just grow on their own, using seeds to store themselves. That's why you can harvest or eat the element of wood in this sense- it's a magical force of the world itself. As each element has its own properties, so to does Flora have the power to begat life. Maybe.
Posted by Cacklecharm at 6:00 AM