There was once a rich and wealthy duke. He performed several experiments peering into the astral realm, and eventually learned of the pearly-realms beyond it. The vistas of far off dimensions contained the secrets of alternate worlds; the multiverse as a whole.

The Duke then learned of something very special; his family jewels. It was a set of 5 identical magic diamonds, each one pink and perfect. And after searching with spell and sight for many years, his sages and researched told him that they were truly unique. There were no other ones like it in the whole of existence and nonexistence. That was the “magic” they possessed. But the Duke saw his other selves in other worlds, seeing how they were poorer then him. Some were even of lesser ranks, he saw himself as a baron in some worlds, without prestige or offers for marriages into higher ranks.

Seeing this, he felt empathy for his other-selves. So he concocted a plan. Using the most powerful of magic, he meddled in affairs he should not, and attempted to copy his unique, one of a kind diamonds into the hands of all his other selves from all worlds and dimensions he could reach. 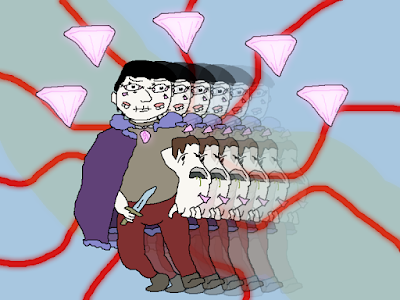 The Duke is a highly mutated, unstable, and driven monstrous being. The magic and science he attempted to use to give his diamonds to other worlds backfired horribly; causing him to both be burned by the special gem-acid, sliced to ribbons by the shards of the pink diamonds, as well as fuse his senior alchemist to his body in the form of his left arm. The duke is in constant pain and is worse yet immortal- cursed to seek the shards of his diamonds across all realities and places far and wide.

Once per encounter, the duke may become totally intangible. His physical form shudders but doesn't become invisible; he can pass through all objects and walls and cannot be harmed by physical attacks except by magic weapons of +1 or better. He also cannot attack while intangible, but uses this power to quickly escape or reposition himself. This power lasts a maximum of 3 turns, but he can end it prematurely if needed. Strangely, this power doesn't apply to the Others.

The duke's mutated arm can spray potions. He can do this once every other turn. The ex-alchemists face screams and pukes a colorful potion material, of which the duke has control over- he can cause it to splash against himself or any target in 15 feet from a carefully aimed blob of vomit-potion. If he is hit by a powerful lightning spell that deals at least 6 damage or is confused, then roll on the table to see what potion is sprayed out instead, having a 50% chance to splash onto himself or on the nearest melee target or object.

Potion-Arm Spew Random Table- 1d6
[1] Gem Acid. Deals 1d6 acid damage.
[2] Polish. Makes swords gleaming. If fire touches it, deals 1d6+1 damage and is engulfed.
[3] Distilled Healing potion. Heals 1d4 damage.
[4] Liquid Scream. The alchemist's chilling scream, which “boils” to let it out. Hireling morale check.
[5] Dimensional Thinner. Causes conjured creatures and objects to mutate and deals 2d6 damage to them. Also deals 2d6 damage to an Other. The Duke must use this to travel dimensions.
[6] Viscous Bubble. Thick bubble acts as minor barriers, -1 to melee attacks and -2 to ranged attacks that try to attack through it. Neutral buoyancy, can last for hours.

Fighting the Duke is also pointless; he is immortal. Not the same kind of immortal as the Gods or the highest of elves; the Duke simply doesn't die. If he is killed, he leaves the universe he is in and must painfully reform in the aether. He will return in 1d6 Seasons; usually only to seek his shards. The Duke has been crazed and driven to some madness on his journey; he attacks other beings on sight in the (true) belief that they are only one copy of many, seeking his unique shards in an ocean of (to him) pointless and transient worlds. The Duke will fight anyone and anything, but will only fight so long as he cannot be outmatched or until he possesses his shard.

The Duke's teleportation abilities let him slip between dimensions; using a spray of dimensional thinner and stepping through- by disrupting his potion ability or physically restraining him from leaving, it is possible to keep him locked in one dimension for some time. The Duke is known among multiple dimensions as existing, but is still a singular, unique entity and as such is extremely rare to encounter. The only way to do so is to find and keep one of the pink diamond shards; he will eventually try to take it back, though this may take eons for him to find it.

The Shards of the Pink Diamonds are considered magical in that they are unique things among the multiverse. While they have no innate powers, any magician who holds a shard gains +1 to saves versus getting sucked unwittingly into other dimensions, and some fashion them into devices that allow scrying into other worlds or the astral realm. Each shard is valued only at 200 coins for those who do not know what it is, and anyone who does has a 50% chance to not want to buy it for fear of the duke coming to collect it. Those who do wish to purchase it and know that it is a piece of a unique gemstone may pay 1000 coins or more.

If you possess a single shard, the Duke has a very small, essentially impossible chance of appearing each moment in time. However if 2 or more shards are collected together, his senses will help him locate it, meaning he will arrive in 1d4+1 seasons. If one entire diamond was someone found or reconstituted, he would appear the millisecond it was completed to reclaim his heirloom.
Posted by Cacklecharm at 6:00 AM