Gems are a strange crossing point for treasure and OSR based dungeon crawling. They tend to be incredibly valuable, but very small and easy to carry. This means the biggest drawback of carrying a lot of treasure, the weight, is completely null and void for gems. Gems get to be special in this way.

But what about making them special in other ways? 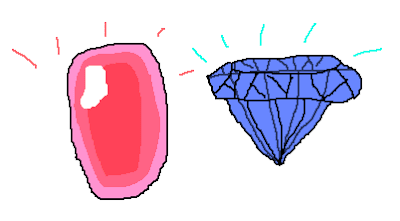 8 Other Kinds of Gems
[1] Tears. When God made the world and realized that it wasn't perfect, he cried perfect magical tears that can fix mistakes. The most well known are diamonds, which can resurrect a dead person back to life, but the other gems can also restore ruined things. Sapphires can restore dead ideologies, passions, and schools of thought. Emeralds can restore natural beauty and wonders. Rubies can restore destroyed items, especially works of art or magical items ruined by time.

[2] Elemental. Every gem has magical power tied to its element. Instead of “rubies” or “emeralds”, gems are named by their element. Kings and Queens wear crowns adorned with fire gems and water gems, and jealous mages hoard earth and air gems in their towers to cast their magical spells and to summon servants with. If you truly need a comparison to real gems:

[3] Resources. Magical research to create new spells requires gems, as does forging any kind of high powered sword or armor. People use them as currency that goes over or above the most important laws of the land; such as paying off the guard for a murder. Nobles will gladly accept a bribe of gemstones though will execute anyone trying to bribe for gold; it's not the same.

[4] Religious. Gems are the literal pieces of the Goddess who created the whole world, or bits of the afterbirth once she begat the stars and nursed the moon. Gemstones protect against spirit and disease, turn the undead, and burn demons which touch them. Even the smallest bracelet or earring is essentially the power of prayer in a small package, and a delightful gift. Every cleric and priest looks like a pimp wearing so much jewelry.

[5] Engines. You stick gems and jewels into magic flying machines like that one 3d cartoon about sky pirates or whatever with magic gems that nobody remembers but the machines look like the stone lobster hovercraft things from that Atlantis movie that nobody remembers too. The gems don't really get used up but lose their 'edge' the more they're used and different colors of gems grant different levels of performance and advantages, such as higher top speed or stronger shields, etc.

[6] Hearts. Gems are not found in the ground, instead they are found as the hearts of powerful magical beings- physically inside their bodies that can be extracted once they are dead. The gem's size and shine is indicative of the being's power, the cut of the gem is the being's wildness or lawfulness with well cut gems being orderly beings and rough gems belonging to monsters or wild heroes. The color is the elemental or personality affiliations of that character. Humans do not have gems instead of hearts unless they become extremely powerful and high level. Creatures like dragons, giants, greater demons and krakens have gems innately.

Geomancers can force the creature's soul within the gem to perform some minor magical feat or ask it a question it must answer truthfully with some magical skill, but with enough magic any creature with a gem can be restored to life. Geomancers can sometimes conjure creatures like this under their control for a short period of time, but they will quickly lose control once the creature gains back its free will from being alive again.

[7] Fake. Dwarves polish gemstones out of glass and mix them with special mineral ores to give them a certain color. They find it hillarious that humans actually believe things so delicate and beautiful grow in the ground. The crafty dwarves even bury them in human mines in a lumpy “uncut” form to trick humans into thinking they're actually finding them. Dwarves make a ton of money selling these fake gemstones to humans, so it's a closely guarded secret.

[8] Weapons. By having a gemstone embedded in your clothing, on a piece of jewelry or ring, or in your armor you can call upon its power to project a colorful weapon that glows as the gemstone does. Every gem has a unique weapon it creates, such as glowing and pulsating ruby 'fire' swords or shocking yellow topaz whips, with the size and brilliance of the gem dictating how powerful the weapon is.
Posted by Cacklecharm at 6:00 AM